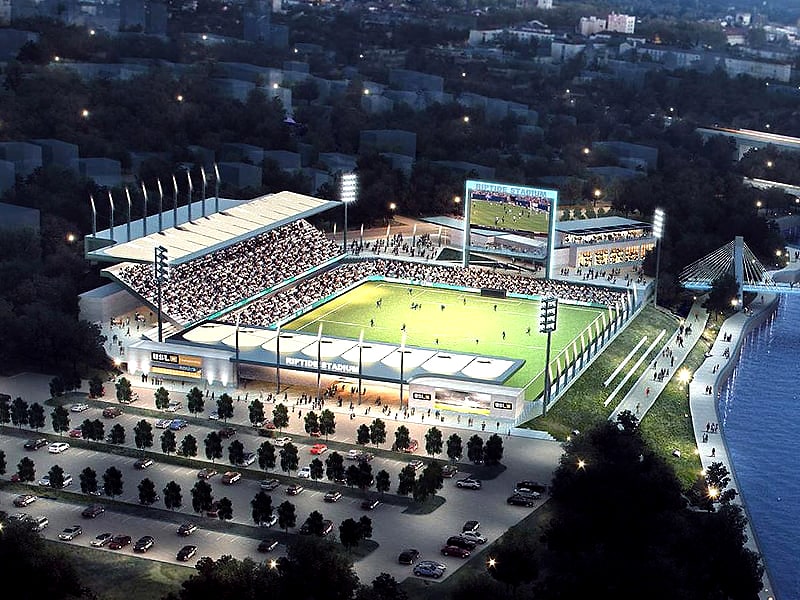 Monday’s (July 25th) vote by the Rhode Island (US) Commerce Corp. to shift the majority of State financing of the Tidewater Landing project to the stadium part of the project was narrower than many observers expected, but it counted the same on the scoreboard.

‘The Valley Breeze’ stated that the Governor of Rhode Island, Dan McKee, who doesn’t normally vote as an ex officio member, was brought on to break the tie, voting ‘yes’ in a measure to approve $27 million in financing that likely saved the project, which has the in-progress 10,000-seat United Soccer League (USL) soccer stadium as its centerpiece and also features many thousands of square feet of commercial space and hundreds of housing units.

Fortuitous Partners, which has the exclusive rights to bring a USL Championship League team to Rhode Island, are excited to bring the same level of enthusiasm, community engagement and performance to Pawtucket that the fans in Phoenix have enjoyed.

Brett M. Johnson – Founder & Partner, Tidewater Stadium, US, will be one of the Speakers at the Coliseum Summit US to be held at the Dignity Health Sports Park, Los Angeles, on September 28th and September 29th, 2022.

The July 25th approval, on a 6-5 vote with two abstaining, which received sharp criticism from opponents on the Board, came with taxpayer protections, including:

McKee said he had no intention of walking away from Pawtucket despite escalating costs on the project, saying the City was abandoned during the Pawtucket Red Sox ordeal and he wouldn’t let it happen again.

Under an original agreement, a combined $36.2 million in State and City financing through tax increment financing, or new revenues generated in the area of the stadium, would go toward infrastructure improvements around the stadium rather than the stadium itself.

But with the budget for the stadium rising from $83 million to $124 million due to inflation and cost increases, the public money now shifts to the stadium itself, a change that had critics on the Board warning that the City and State could end up with a stadium and nothing around it. Questions centered on whether the stadium on its own could generate the attendance figures needed.

A total of 37 percent of the stadium’s cost, at $44.5 million, will now come through public financing. An additional $10 million in net tax credits will cost the State about $14 million.

“Thank you to the Commerce Corporation Board. With tonight’s (July 25th) vote, the construction on the Tidewater Landing Stadium Project can now continue. Together, all the parties have come to an agreement on a public-private partnership which includes clear taxpayer protections in place and commits more private dollars to the stadium than any other project of its kind in the United Soccer League.”

The Tidewater project on the banks of the Pawtucket River is a gamechanger for both the City and the State, they said.

The statement added, “Rhode Islanders and visitors will be able to attend a soccer game or a concert, enjoy the riverwalk, grab a bite, or call Tidewater Landing home. This world-class destination on Pawtucket’s riverfront will support thousands of jobs and create millions of dollars of tax revenue.”