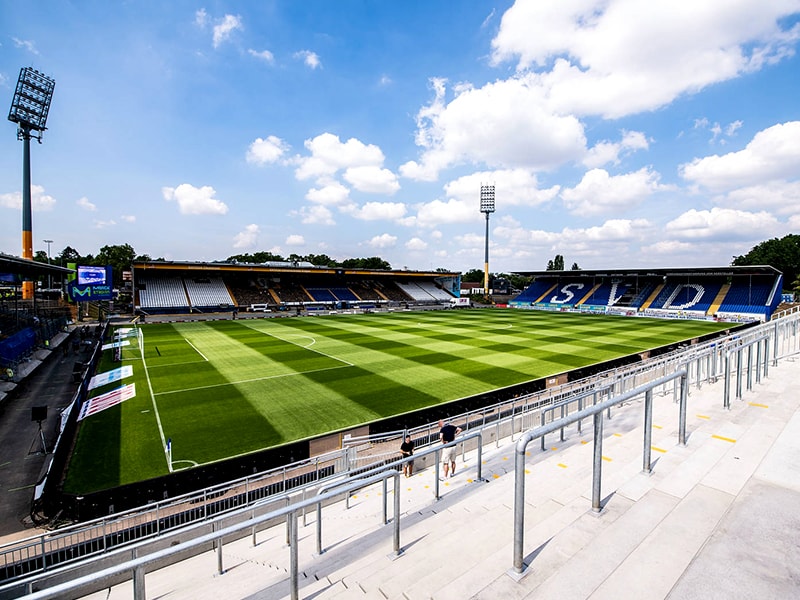 The famous terraces of Merck-Stadion am Böllenfalltor – a multi-use stadium in Darmstadt, Germany – is passé. A brand new double-tiered grandstand is almost ready to replace them.

After over a year in the making, the new Gegengerade (backstretch) in Darmstadt is almost complete.

It was on December 10, 2018, that the pulling down work of the old east terrace (dating back to early 1950s) started. The speedy construction of a new landfill-based terrace was made possible as part of its landfill was preserved. The new stand is lower and straightened, while the old stand was curved. Herein lies the main difference.

In mid-2019, the new terrace, which comprises lower of two tiers, was opened. This facilitated the stadium to welcome supporters to the east stand again. Around 5,500 people can fit into 28 narrow rows of terracing, of which 1,200 are located in the away section.

To set up the reinforced-concrete upper tier, construction began in spring of 2019 behind the new terracing. The only things to be put in place are the last sections of the roof and seating underneath. When these fall in place, the upper tier can hold up to 3,000 people, 600 of whom will be away followers.

The new east stand will be thrown open to the public from February 2, when games of 2. Bundesliga resume. From then on, the stadium will accommodate up to 18,000 fans. This state won’t last long, though. At the end of 2019-20, the old main stand is expected to be pulled down. SV Darmstadt – the German football club based in Darmstadt, Hesse (the Merck-Stadion am Böllenfalltor is their home arena) have already relocated the offices and players’ facilities to a new pavilion attached to a nearby sports hall, so that they can use the stadium even during the reconstruction stage.

The entire development will cost just over €40 million of which the new main stands will be the most expensive one. It is expected that the brand new stand will open after one-and-a-half years under construction, which means it should be ready during the 2021-22 seasons.