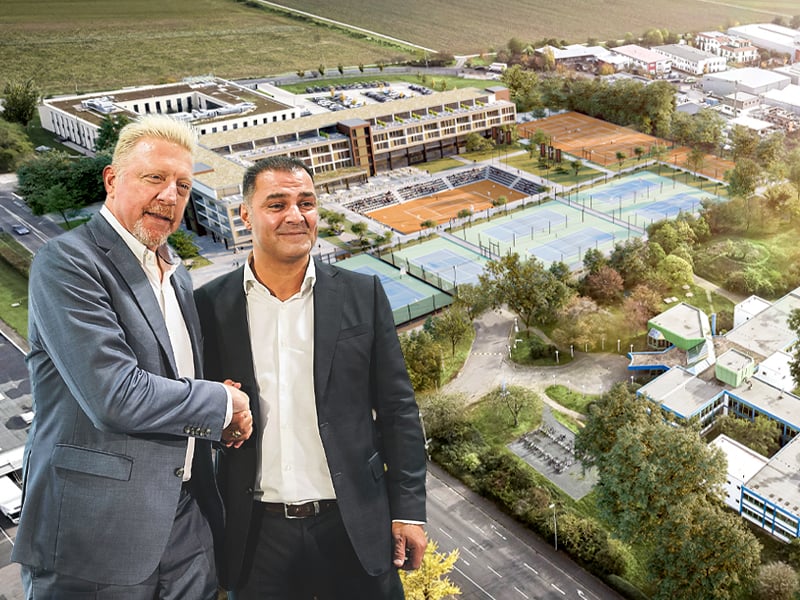 The city council at Hochheim am Main in Germany has given the green light to build the Boris Becker International Tennis Academy. The city council has also given the go-ahead as regards the proposed resolution for the planned tennis academy, thus making the project plausible. Investor Khaled Ezzedine has got the building permit for the same.

The groundbreaking ceremony was held on June 18 and tennis legend Boris Becker officially kicked off the construction of the 22 million euro project, which is expected to be completed in Autumn 2021. The excavators started work shortly after that.

Stated the celebrated tennis player, “It is great that the plans were carried out despite the coronavirus menace. The project didn’t wobble, but there was no planning certainty. It is therefore a small miracle that we are here today despite the pandemic.”

Talking about the huge negative effects of COVID-19, the three-time Wimbledon winner said, “Ninety percent of players rely on prize money. You have no high advertising revenue and no protection. Many have therefore considered whether they have to look for another profession. At times they weren’t even allowed to give tennis lessons.”

The Boris Becker International Tennis Academy is scheduled to open this year in Hochheim am Main, Hesse, in Germany. Young tennis talents from all over the globe will be trained in the Academy. “I see myself as the patron. Where Boris Becker is on it, Boris Becker must also be in it,” stated the tennis great.

Boris Becker is a German former world No. 1 professional tennis player. He was successful from the start of his career, winning the first of his six major singles titles at the age of 17. His Grand Slam singles titles included three Wimbledon, two Australian Open and one US Open.

So far, there has been no discord as regards implementing the project. The City Council in Hochheim am Main greenlighted the administrative proposal unopposed for the planned tennis academy. Construction is scheduled to begin in five to seven weeks’ time.

The tab of the project is being picked up by real estate entrepreneur of Germany Khaled Ezzedine, who is investing around 20 million euros in the academy.

“I am glad that the decision was clear and that the academy received so much support. It was actually clear in advance that there was widespread public acceptance, but sometimes political processes are unpredictable. Because of the coronavirus crisis the decisions have been delayed recently, but from now on everything will go quickly,” asserted Ezzedine.

The Academy will sit on 48,000 square meters, a site with huge spaces, a hotel and an affiliated Boris Becker Museum will be set up. Apart from this, the site will also enjoy the largest indoor tennis hall in the world with 22 seats.

“Tennis lives in Germany, so we are convinced that the project will be a success,” Becker averred.

Ezzedine stated that he decided to build a Tennis Academy in Germany as there is no such academy in Germany as yet, though there is a huge market for it – “Tennis is booming. Our facility will include 39 seats, including 18 outside seats and 21 in the hall. There will be hard courts and clay courts. In addition, possibly an artificial turf pitch.”

The main objective of building the Academy is to mould the young talents. Up to 270 children and adolescents between the ages of 12 and 18 will be provided complete school education in the campus, which they can complete with the German Abitur. Ezzedine informed that their USP will be the German Abitur as it holds lot of significance for parents. With this, they will hold the competitive edge.

German Abitur is a qualification granted by university-preparatory schools in Germany, Lithuania, and Estonia. It is conferred on students who pass their final exams at the end of their secondary education, usually after 12 or 13 years of schooling.

Ezzedine refuted that the costs are too high – “No, absolutely not. In terms of price, we are exactly where the other two large academies in Europe are. We also have a locational advantage in that Frankfurt International Airport is only a good quarter of an hour’s drive away. Our offer is not just for the people of Germany.”

He further said that in Phase I, he will be investing 20 million euros, which should be completed in late Autumn 2020. A center court with a grandstand will be included. Just after that, the real estate entrepreneur said that he would like to start by training 40 to 60 children. In the second phase, another eight million euros will be invested. After that, a hall will be added with another center court and an expansion of the hotel is also being planned in the second phase.

Ezzedine informed, “We would like to host Association of Tennis Professionals (ATP) and Women’s Tennis Association (WTA) tournaments. We understand our project is a comprehensive offer for professionals, for amateurs, for associations, for children and young people. This factor is very important to me. We also want to run tournaments for people with disabilities. Regardless of this, one can have a nice weekend with us, for example, with one’s spouse.”

He further went on to inform that a four-star hotel with 65 rooms will be part of the complex and there will also be a restaurant with 300 seats. There will be 12 apartments for parents whose children will play, learn and train in the Academy. The Academy will also enjoy a wellness area, a tennis museum, a hairdresser and five VIP apartments for professionals who want to prepare or get trained in the Academy.

Ezzedine had this project in mind for a year and a half and he immediately got in touch with Boris Becker whom he did not know before. The tennis great immediately recognized the potential of the project – “He is the patron and eponym of the Academy and can choose to what extent he wants to get involved and get involved.”

“The name Boris Becker is the largest brand that German sport has to offer. It outshines everything. He is a world star who is being treated with the greatest respect, especially outside of Germany. He is and remains my sporting idol,” he maintained.

Boris Becker is also ‘Head of Men’s Tennis’ at the German Tennis Federation (DTB). Ezzedine said that he does not believe that the Academy will be a competitor for the DTB – “We are open to alliances with DTB and have communicated it to them. We see ourselves as an Academy that can offer a complete package. A package that has never been offered in Germany before.”

Boris Becker said that he has high expectations for the tennis academy, for which Ezzedine received the official building permit recently – “I will take care of the players and coaches, if not every week,” said Becker and emphasized, “For me it is a matter close to my heart”.

Forty-nine-year-old Khaled Ezzedine is the son of Lebanese immigrants who came to Germany in 1969. Ezzedine worked as a pilot for Gulf Air, one of the world’s leading airlines, for 11 years. Fifteen years back, he switched from the cockpit to the real estate industry. He has already implemented over 100 construction projects with the Ezzedine Group. He is married and has three children. The 13-year-old son and 11-year-old daughter attend Patrick Mouratoglou’s Tennis Academy in Nice, France. The family’s main residence is in Wiesbaden, Germany.