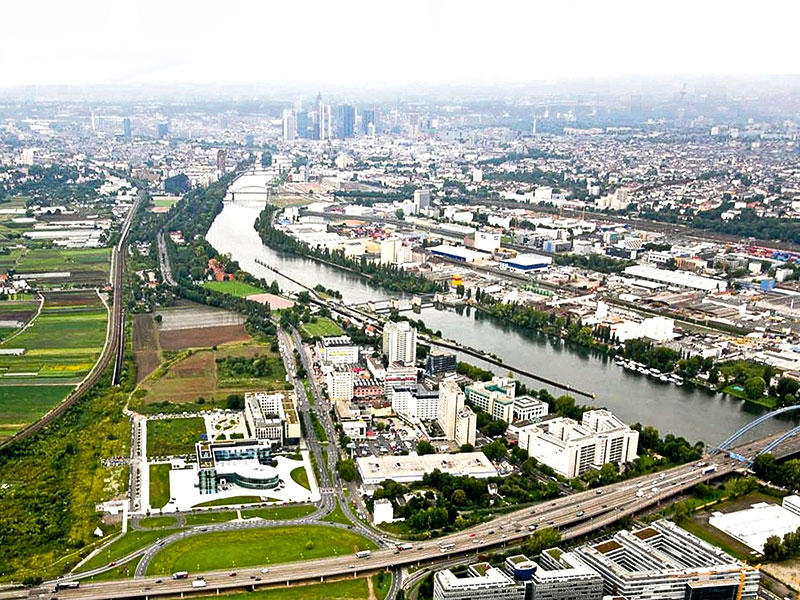 There is a glimmer of hope for the fund-throttled Fraport Arena (Germany) to be elevated into a multifunctional arena with the Bundesliga club Eintracht Frankfurt extending support to the Fraport Skyliners for their project. This was confirmed by the Bundesliga club Board Director, Axel Hellmann, recently.

Hellmann is said to have promised that the Skyliners could count on them in the Fraport Arena project.

Fraport Arena is an indoor arena that is located in Frankfurt, Germany. It is primarily used to host basketball games, volleyball matches, and indoor football matches. The arena’s seating capacity is 5,002 people for basketball games. Their home arena – which was originally named Ballsporthalle Frankfurt – went on steam in 1988. It has been the home arena of the Fraport Skyliners since 1999. The arena was renamed Fraport Arena after the Frankfurt International Airport obtained its sponsorship naming rights in 2011.

The Skyliners Frankfurt, currently known as Fraport Skyliners for sponsorship reasons, are a professional basketball club based in Frankfurt, Germany. Their home arena is Fraport Arena. The club has played in the Basketball Bundesliga since 1999. Its greatest accomplishments were the German Cup competition title in 2000, the German national championship in 2004 and the FIBA Europe Cup in 2016.

Hellmann termed the Skyliners’ concept “very convincing”. He could imagine synergy effects, because Eintracht has been marketing the stadium on its own for quite some time.

However, Hellmann informed that “a share in the construction costs of the hall is not planned. The ‘how’ is still being discussed, but the one or the other Euro should flow.”

Eintracht Frankfurt is a German professional sports club founded in 1899, based in Frankfurt, Hesse, which is best known for its football club, currently playing in the Bundesliga, the top tier of the German football league system.

Earlier, in 2019, Frank had said that for nearly 15 years, the German City of Frankfurt am Main has been discussing the construction of a multifunctional arena and that this could soon become a reality with two investors on board.

However, that was not to be as the two bidders, Langano, part of the French Lagardère Group, and the US-based Anschutz Entertainment Group (AEG), which operates the Staples Center in Los Angeles, dropped out because of the long drawn-out award procedure.

The Frankfurt Skyliners then announced plans to take over the reins of the construction work in their hands.

Accordingly, Fraport Skyliners Managing Director Gunnar Wöbke met Frank and submitted plans for construction of the multifunctional arena at the Kaiserlei (Germany) which could be realized on the basis of the existing tender. Frank is said to have described Wöbke’s plans as a “sovereign performance”.

“The plans submitted by the Skyliners were of a similar magnitude to the specifications in the ultimately unsuccessful tender,” said Frank. This means that the basketball club would not receive the property as a gift, but would have to pay a lease amount that corresponds to the value of the area on the border between Frankfurt and Offenbach.

“What doesn’t grow, it dies,” fumed Wöbke on the whole sticky issue of Fraport Skyliners’ arena.

Without boasting a new arena, the Skyliners’ future seems bleak in Frankfurt economically or in terms of sport, as the ball sports hall does not correspond to a modern sports facility with boxes and spacious VIP rooms.

For Wöbke, the construction of an arena at Kaiserlei, for which a figure of 120 to 150 million Euros was planned, should not turn futile – “This is the only place in Frankfurt where the arena can be realized realistically and economically in a timely manner. This is a very good location.”

However, Wöbke is yet to announce from where the financing will come.

With ‘The Eagles’ extending their support and Jan Schneider (CDU) stating that the Skyliners would be awarded the contract, it is hoped that the Fraport Syliners’ venue dreams would finally get realized, though a lot of hurdles still need to be overcome.