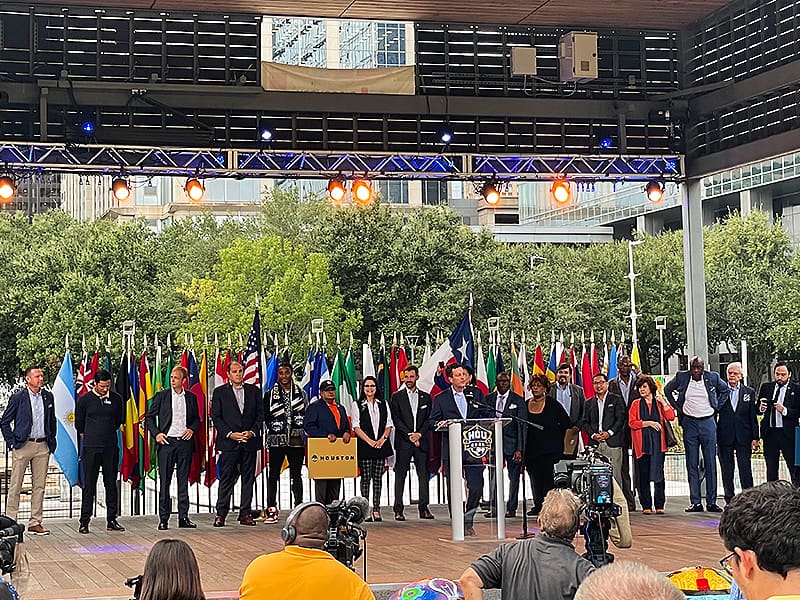 The Houston 2026 World Cup Bid Committee (US) showcased its world-class infrastructure and hosting credentials to FIFA officials during an official inspection site visit on October 26th.

The ‘Houston 2026’ stated that a delegation led by Confederation of North, Central America and Caribbean Association Football (Concacaf) President/FIFA Vice-President Victor Montagliani arrived in Houston on October 25th via Houston’s renowned airport system. The visit provided an opportunity for officials to experience first-hand the unique Spirit of Houston, underlining the City’s united, community-driven and innovative approach to becoming a World Cup Host City.

The Houston 2026 World Cup Bid Committee is leading the South Texas region’s efforts to host the FIFA World Cup 2026™. It is a subsidiary of the Harris County – Houston Sports Authority. The FIFA World Cup 2026™ will be played in 16 Cities across the United States, Mexico and Canada. Houston is among 17 Cities vying to become a US Host City. A final decision is expected in the first half of 2022.

The Confederation of North, Central America and Caribbean Association Football, abbreviated as Concacaf, is one of FIFA’s six continental governing bodies for association football.

The ‘Houston 2026’ further stated that the day’s itinerary included a series of face-to-face meetings and activities in which Houston 2026 stakeholders discussed the City’s proven track record in delivering world-class international soccer events and how they plan to deliver a 2026 FIFA World Cup™ of the future, in America’s City of the future.

The delegation toured the state-of-the-art, 70,000-plus seat NRG Stadium in Houston, Texas (US), which boasts a retractable roof, is centrally located in the heart of the City and will provide the world’s soccer family with convenient access to Houston’s vibrant hospitality and cultural center. The NRG Park complex is also home to the 41,168-capacity Minute Maid Park.

Said Canetti, “We’re very grateful to have this face-to-face time with FIFA officials to showcase Houston’s vast resources and preparedness to host matches for the World Cup. Our goals are fully aligned with FIFA, Concacaf and U.S. Soccer to create lasting legacies that will grow the game and benefit generations through the most prestigious event and the most popular sport in the world.”

Headquartered in Washington, D.C., the U.S. Soccer Foundation’s programs are the national model for sports-based youth development in underserved communities. Since its founding in 1994, the Foundation has established programs proven to help children embrace an active and healthy lifestyle while nurturing their personal growth beyond sports. Its cost-effective, high-impact initiatives offer safe environments where kids and communities thrive.

The group also had an opportunity to interact with passionate and soccer-loving Houstonians following the press conference. Fans lined the streets to welcome FIFA with branded support signs and voiced their excitement to welcome the world to Houston for the World Cup, ensuring Houston’s one-of-a-kind spirit was widely felt and celebrated across the City on October 26th.