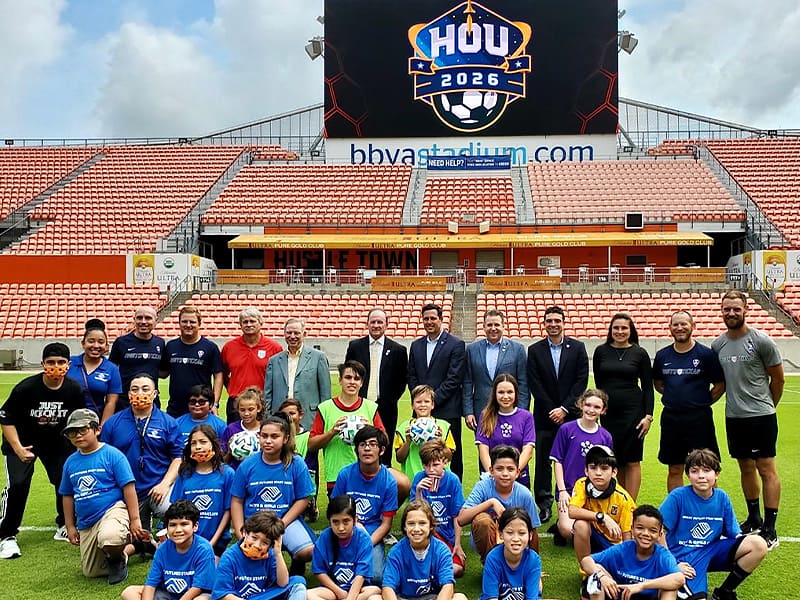 During a presser held at the BBVA Stadium in Houston, Texas on August 3rd, it was announced that Segal, a real estate developer who recently acquired a majority ownership of Houston’s soccer club, will serve on the Houston 2026 Bid Committee Board. Moreover, Segal announced financial contributions which will help launch two new programs: Freekicks Soccer and Girls’ Intro to Soccer. Both programs are part of the Houston 2026 Bid Committee’s ‘Grow the Game’ initiative which aims to provide under-served communities with access to soccer.

The Houston 2026 World Cup Bid Committee is leading the South Texas (US) region’s efforts to host the FIFA World Cup 2026™. It is a subsidiary of the Harris County – Houston Sports Authority. The FIFA World Cup 2026™ will be played in 16 Cities across the United States, Mexico and Canada. Houston is among 17 Cities vying to become a U.S. Host City. A final decision is expected in the first half of 2022.

The Dynamo are a Major League Soccer (MLS) team that has won two MLS Cup championships, one Lamar Hunt U.S. Open Cup and four conference championships in its first 16 seasons and has qualified to represent the United States in international competition seven times. The Dynamo have advanced to the Conference Championship series seven times in 15 years, the most of any MLS team since 2006, and the club’s four appearances in the MLS Cup Final are tied for the most in the league during that time span.

The Houston Dash joined the Houston Dynamo Football Club on December 12th, 2013 as the first expansion team of the National Women’s Soccer League (NWSL). The NWSL is supported by the Canadian Soccer Association and the United States Soccer Federation. It is the top-flight women’s professional soccer league in North America, featuring many of the top players from the United States and Canada, as well as talent from around the world. The Dash began play in April 2014 for the start of the league’s second season. The Dash captured their first league trophy, the 2020 NWSL Challenge Cup, on July 26th, 2020.

The teams train at Houston Sports Park (HSP), the premier training facility in Southeast Texas, and play at the BBVA Stadium in downtown Houston.

The 22,039-capacity BBVA Stadium is an American multipurpose stadium located in Houston, Texas (US) that is home to the Houston Dynamo FC, a Major League Soccer club, the Houston Dash of the National Women’s Soccer League and to the Texas Southern Tigers football.

With the above new soccer programs, the Houston 2026 World Cup bid will serve as a catalyst for the significant growth of the game and engage new soccer players across the State. More than four million people in South Texas are connected by soccer, but, through Houston’s community-driven approach, there is a potential to engage over three million more.

Freekicks Soccer will take place at the Boys & Girls Clubs of Greater Houston, and will ensure kids aged eight to 14 have professional coaching and are provided with soccer and training equipment. Girls’ Intro to Soccer, in partnership with Mayor Turner’s Office of Education, will take place at schools throughout Houston and create a unique in-school opportunity for fifth and sixth grade girls to learn the sport. Both programs are slated to launch this Fall under the guidance of certified coaches from the South Texas Youth Soccer Association, offering consistent weekly training sessions.

During the event, Segal stated, “It is an honor to join the Houston 2026 World Cup Bid Committee. Houston is a world-class City whose diverse and passionate fan base is ready to host the world’s pre-eminent sporting event. I look forward to supporting this important effort to bring international soccer to Houston and helping to grow the game with the next generation of Houstonians with the launch of Freekicks Soccer and Girls’ Intro to Soccer.”

Chris Canetti, President of the Houston 2026 World Cup Bid Committee, commented “We are delighted to welcome Ted to our team. These two community programs, with the generous help from Ted and the Dynamo and Dash, showcase Houston’s strategic approach to its World Cup bid. We are committed to putting legacy at our core, leaving a lasting impact on the game of soccer, and leveraging the event to make Houston a better City for all.”

Kevin Hattery, President-cum-CEO of the Boys & Girls Clubs of Greater Houston, noted, “Boys & Girls Clubs of Greater Houston truly appreciates the support of Ted Segal, along with the Dynamo, the Dash and the World Cup Bid Committee, in allowing our clubs to take part in the transformational Freekicks Soccer program to benefit our youth aged eight to 14. Freekicks complements two of the Boys & Girls Clubs’ core pillars, including healthy lifestyles and good character and citizenship, and will connect more children and young teens with the world’s most popular sport. Hosting the World Cup in 2026 would give our members exposure to soccer at the highest level.”

City of Houston Director of Education, Olivera Jankovska, put in, “Girls and women often hesitate to dream big – whether that’s taking the next step, making that call, posing that question, or entering a soccer team – they often doubt their capabilities. I have always advocated for girls to be empowered with confidence. I want to thank Ted Segal, the Dynamo and Dash and the World Cup Bid Committee for establishing this program and working with the Mayor’s Office of Education as we can collectively help make an impact in these areas.”

Houston 2026’s combined efforts with the Dynamo and Dash focus on strengthening existing grassroots programs in a collective manner and building on the strong foundation of support for soccer in the City. This support was demonstrated when Houston recently hosted sellout crowds and international players for the Confederation of North, Central America and Caribbean Association Football (Concacaf) Gold Cup matches. Earning the right to host World Cup matches would be an honor for the greater Houston area and generate significant and lasting benefits for the community.

The Concacaf Gold Cup is the main association football competition of the men’s national football teams governed by Concacaf, determining the continental champion of North America, which includes Central America and the Caribbean. The Gold Cup is held every two years.