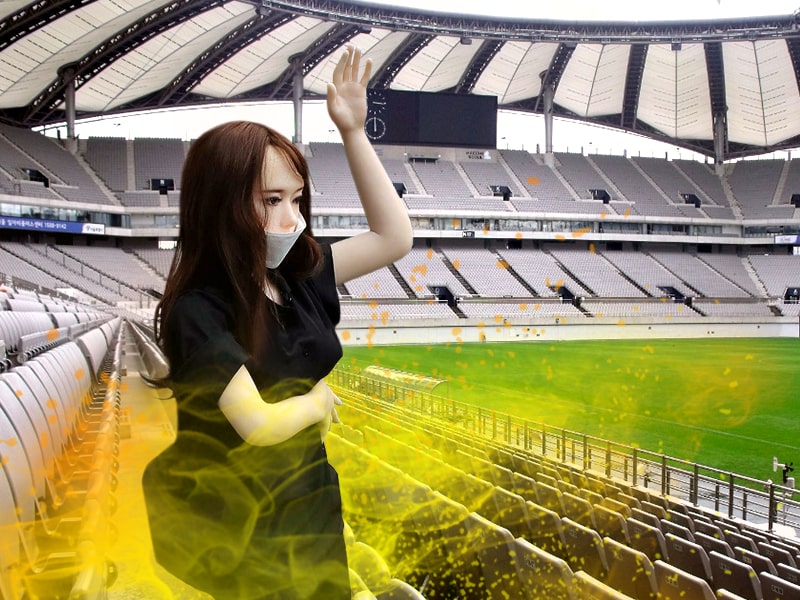 Sports leagues across the world are facing a huge challenge due to the coronavirus crisis. Ghost games are slowly resuming, but how the ambiences in stadiums can be improved taking into cognizance the ‘sex doll’ incident of FC Seoul.

The sex dolls were used to simulate the presence of fans at the otherwise empty stadium.

With the K-League having commenced in fanless stadiums after the season started on May 8, the sex dolls, which club officials insisted were “premium mannequins” were being used to suggest the presence of fans during their game against Gwangju FC.

Of course, most clubs will not be in a tearing hurry to emulate the example of FC Seoul. In the meantime, the top-flight South Korean side has apologized after fans charged them with using sex dolls in the stands.

FC Seoul is a South Korean professional football club based in Seoul, the capital of South Korea, which plays in the K League 1.

However, FC Seoul has maintained that they are not sex dolls but “premium mannequins” but admitted that they came from a supplier who produces sex toys.

And some of the dolls were holding signs advertising X-rated websites – despite pornography being banned in South Korea.

Media reports stated that the mannequins’ manufacturer has apologized to FC Seoul. But they also reiterated that the dolls were merely “premium mannequins”.

On May 17, FC Seoul played their first home match of the K League season. It was a ghost game – one of the several steps initiated in the face of COVID-19 bane.

Just before the match, a company called Dalcom offered to fill some of the empty seats, and the club agreed to it.

There were 30 mannequins in total – 28 of them female, and two of them male. However, fans watching the match online noticed that some of the mannequins resembled sex dolls – and some were advertizing X-rated websites – which led to the club apologizing on Instagram and Facebook.

Dalcom maintained that the adverts came from a sex toy company who placed orders with Dalcom, and wanted to take pictures of the mannequins before the game.

“They were supposed to take all the logos down before the game started. But, there were several hair bands and logos left to be caught by the public eye,” Dalcom Director Cho Young-june told mediapersons.

FC Seoul official Lee Ji-hoon acknowledged it did not do a background check on Dalcom, and did not realize they worked in the sex industry.

Lee said he thought the dolls looked “very human” – but said it did not even cross his mind once that they could be sex toys.

Lee went on to advice “we would like to apologize … to everyone who loves and supports FC Seoul”.

“We will be holding further discussions on how we can review potential problems in similar matters. We will put forth our due diligence to prevent such issues in the future,” Lee added.

The 2020 K League season was supposed to begin in February but was delayed because of the virus outbreak.

South Korea’s success in tackling the virus facilitated football to resume sooner than almost everywhere else.

When the K League season began on May 8, sports fans were glued online to get their fix – and also attracted a lot of global attention.

Apart from empty stands, handshakes are banned, and coaches have to wear face masks.

“Excessive spitting or blowing of the nose is prohibited and players should refrain from close conversations,” informed a K League official.

Pictures of supporters were used as well as artificial crowd noises to make the ambience animated.