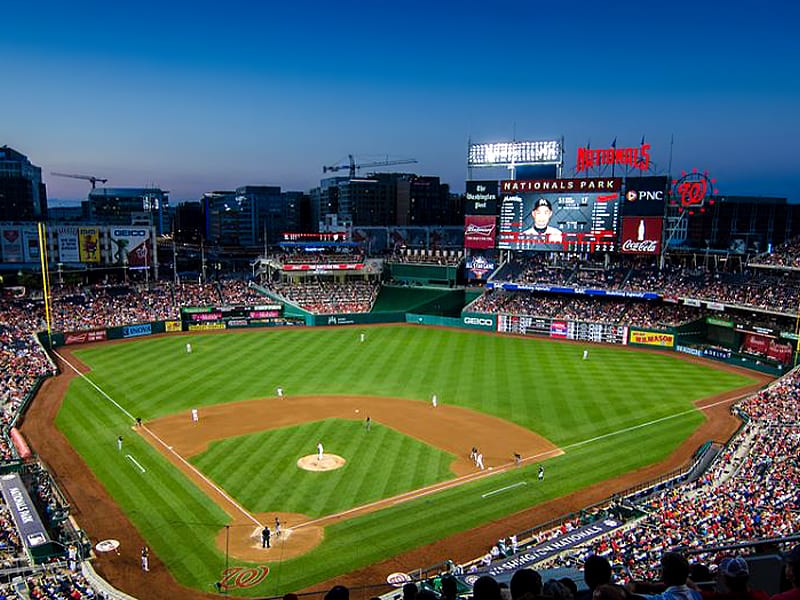 At a professional baseball game held at the Nationals Park in Washington (US), fans and players were a bundle of nerves and almost skipped their heartbeats and scrambled for cover after a shooting outside the venue caused echoes of gunfire inside the stadium.

The ‘ABC News’ stated that the game between the Major League Baseball (MLB) teams San Diego Padres and the Washington Nationals on the night of July 17th was suspended in the sixth innings after the gunfire was heard.

Videos of the incident shared on social media showed some fans crowding into the third-base dugout.

The San Diego Padres are an American professional baseball team based in San Diego, California (US). The Padres compete in Major League Baseball (MLB) as a member club of the National League (NL) West division.

The Washington Nationals are an American professional baseball team based in Washington, D.C. The Nationals compete in Major League Baseball as a member club of the National League East division. From 2005 to 2007, the team played in the 45,596 RFK Stadium while a new stadium was being built.

The 41,313-capacity Nationals Park is a baseball park along the Anacostia River in the Navy Yard neighborhood of Washington, D.C., home to the Washington Nationals of Major League Baseball since its completion in 2008. It was the first LEED-certified Green major professional sports stadium in the United States.

Initially, it was not clear if the shooting was inside the complex.

The ‘ABC News’ further quoted Ashan Benedict, the Metropolitan Police Department’s Executive Assistant Police Chief as informing that the shooting, an exchange of gunfire between people in two cars, left three people injured. One of the people who were shot was a woman who was attending the game.

Benedict further informed that she was struck while she was outside the stadium and her injuries were not considered “life-threatening”.

He further informed that two people who were in one of the cars later walked into a local hospital with gunshot wounds and were being questioned by investigators. The extent of their injuries was not immediately clear.

Investigators were still trying to locate the second vehicle involved in the shooting.

Umpire crew chief Mark Carlson stated, “It was just a chaotic scene. We heard what sounded like rapid gunfire. We didn’t know where it was coming from.”

The Padres had just taken the field for the bottom of the sixth when several loud pops were heard from the left field side of the ballpark.

Fans sitting in the left field quickly began leaving through the center field gate. A short time later, fans along the first base side began briskly leaving their seats.

Some fans crowded into the Padres’ dugout on the third base side for cover, while sirens could be heard from outside the park.

Twenty-six-year-old Ted Borenstein was at the game with his girlfriend and his best friend, celebrating her birthday and “having a great time” when he heard two pops. He said the group thought it was practice for a fireworks show.

Borenstein said he quickly realized it was far more serious when he saw people in the stands start filing out and watched Padres star shortstop Fernando Tatis Jr “bolt from the field”.

Borenstein further narrated that in the stadium’s Diamond Club, where he and his friends were, people were hiding under tables and chairs, thinking there was a shooter inside the stadium – “People were down on the ground, kind of petrified, trying to calm down the younger kids. I was taken aback, I was scared.”

The Nationals Park authorities initially announced there had been an incident outside the stadium and posted a message on the scoreboard telling fans to remain inside the facility.

About 10 minutes later, the team tweeted, “A shooting has been reported outside of the Third Base Gate at Nationals Park. Fans are encouraged to exit the ballpark via the CF and RF gates at this time.”

More than two dozen police cars, ambulances and fire engines were on the street outside the third base side of the arena and a police helicopter hovered overhead.

Twenty-seven-year-old Arman Ramnath said he and his friend ended hiding behind the seats for five or more minutes. After a while people started getting up and leaving, he said, but stadium announcements told fans to wait. Eventually they were allowed to leave – “It felt very surreal. I wasn’t really sure how to react. I mean, you hear about it … but you never expect it to be something that could affect you.”