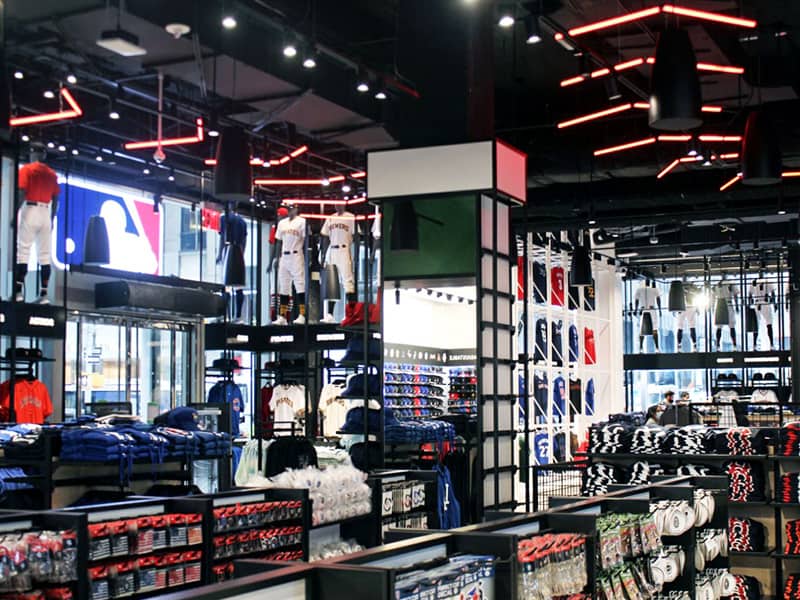 Major League Baseball is not letting its high hopes flicker for its newly completed flagship retail store which opened on October 2nd in New York (US), despite the grim COVID-19 scenario in the country, a sizable reduction in tourist and overall activity in midtown Manhattan, and the soon-arriving conclusion to the league’s 2020 season.

Amid several factors that likely will serve to depress some immediate foot traffic to the location, with the league eyeing the venture as a critical long-term initiative.

Representing the league’s first permanent retail store in the US, the 10,000-square-foot store split among two floors is armed with 100 different apparel styles, 10,000 different authentic and lifestyle caps, a customization station for both jerseys and socks, and an exclusive collection of memorabilia for sale, some of it game-used.

The shop will also represent a highly visible display for each of MLB’s key licensed merchandise partners, including Nike, New Era, Stance, ’47, Rawlings, Mitchell & Ness, and Topps, among others.

“There was previously nowhere to go to see the full breadth of what we have to offer,” said Noah Garden, newly promoted as MLB’s Chief Revenue Officer.

“Now we do, and it really gives us the ability to present all of that in a prominent showcase right in the heart of Manhattan,” Garden added.

The store – located across the street from Radio City Music Hall and developed in partnership with prominent hospitality, premium experiences, and sales group Legends – has been in the works for about a year. Part of a much larger move by MLB to its new headquarters in what was previously known as the Time-Life Building, the MLB Flagship Store will also include a large adjacent courtyard and a modular interior design to allow for frequent events, both public and private, and the regular use of the store to promote key league jewel events such as Opening Day and the All-Star Game.

The league also plans to use the store, situated in what was previously a broadcast studio for regional sports network SportsNet New York, for a wide array of MLB player appearances, product unveilings, and other special events.

Remarked Garden, “We’re going to program this space aggressively. This will be a very important tool to speak directly to our fans, and also will be a place to engage with our partners.”

The opening of the store will additionally feature a four-day stop between October 5th -8th of the Commissioner’s Trophy for fan photos before it travels to Arlington, Texas, for the neutral-site 2020 World Series and is presented to the league champion.

“Legends has worked closely with Major League Baseball to create an immersive retail experience that brings baseball fans close to the game they love with a vast selection of products for fans of all ages, across all 30 MLB clubs, including exclusive items that cannot be found elsewhere,” said Dan Smith, President, Legends Hospitality.

The October 2nd opening date represents a slight delay from the originally targeted timetable of this past summer, owing to some pandemic-related development issues.

Dedicated retail stores operated by sports leagues under their brands is nothing new to New York, as the National Basketball Association (NBA) and National Hockey League (NHL) have each run their own flagship stores there for many years, and the National Football League has operated more temporary pop-up locations.

The City, however, is still trying to recover from the ongoing pandemic, and has seen overall foot traffic fall considerably over the past six months as key institutions such as the Broadway theatre scene still remain dark.

Garden observed, “New York is steadily coming back to life. We’ve just moved to indoor dining here, albeit in a limited sense, and ideally, you’ll continue to see this area moving forward make more strides toward a broader recovery, and we’re looking forward to this store being part of it.”