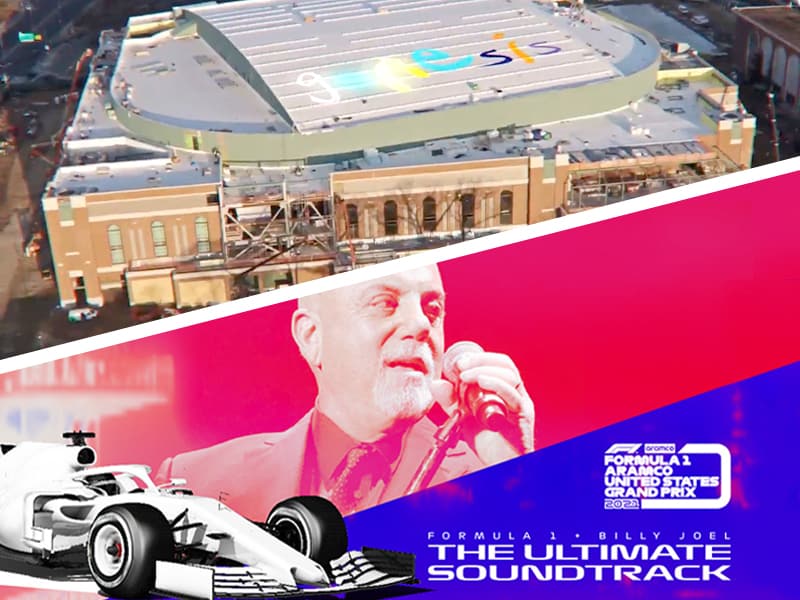 UBS Arena (US) has announced another concert planned at the spanking new venue and home of the National Hockey League (NHL) team New York Islanders. The English rock band Genesis will take the stage there on December 10th, 2021, five days after playing at the 20,789-capacity Madison Square Garden in New York.

‘UBS Arena’ stated that the facility is still under construction but is expected to be ready when the Islanders’ 2021-2022 seasons start. Two other concerts have been announced there so far: American country music singer-songwriter Eric Church to perform on December 4th, 2021 and the Canadian singer The Weeknd on April 7th, 2022.

The 19,000-capacity UBS Arena is a $1.5 billion multipurpose arena under construction and development in Elmont, (New York US), next to the Belmont Park race track. The venue is projected to open for the 2021-2022 NHL seasons.

The New York Islanders are a professional ice hockey team based in Uniondale, New York. The Islanders compete in the National Hockey League (NHL) as a member of the East Division. The team plays its home games at the 14,500-capacity Nassau Coliseum but will soon move to their news digs – UBS Arena.

Genesis, with keyboardist Tony Banks, vocalist Phil Collins, and guitarist Mike Rutherford, is embarking on its first North American tour in 14 years. The trio have not toured together since the ‘Turn it On Again: The Tour’ in 2007.

The ‘UBS Arena’ further stated that the Elmont tour date is the third-to-last show on the tour, which also takes them to Buffalo, Pittsburgh, Chicago, Cleveland, Columbus, Montreal, Toronto, Philadelphia, Boston, and Washington, D.C., among other major US and Canadian Cities. The group will also be joined by Nic Collins on drums and the band’s long-time lead guitar and bass player Daryl Stuermer.

The band is known for its hit numbers such as ‘Invisible Touch’, ‘In Too Deep’ and ‘Turn It On Again’, and they were inducted into the Rock & Roll Hall of Fame in the year 2010.

Circuit of the Americas (COTA) announced recently that they will welcome legendary musician Billy Joel to the Germania Insurance Super Stage at the FORMULA 1 2021 ARAMCO UNITED STATES GRAND PRIX. On October 23rd, multi-GRAMMY® award-winner and Rock & Roll Hall of Famer Billy Joel will take the stage for the first time in Austin (Texas, US) since the ‘90s. The legendary performer is sure to rock the audience and set the stage on fire with his numerous hits, including, ‘It’s Still Rock & Roll to Me’, ‘Uptown Girl’ and ‘We Didn’t Start the Fire’. Tickets for the Formula 1 Grand Prix and concerts are on sale now.

‘Circuit of the Americas’ stated that Billy Joel is one of the biggest concert draws in the world and the biggest sellout, selling out arenas and stadia across the globe. Having sold 150 million records over the past quarter century and scoring 33 consecutive Top 40 hits, Joel ranks as one of the most popular recording artistes and respected entertainers in history. The singer/songwriter/composer is the sixth best-selling recording artiste of all time and the third best-selling solo artiste. In 2016, the Library of Congress selected ‘Piano Man’ for preservation in the National Recording Registry for its “cultural, historic and artistic significance”.

The 1, 20,000-capacity Circuit of the Americas is a Grade 1 FIA-specification 3.426-mile motor racing track and facilities located within the extraterritorial jurisdiction of Austin, Texas.

The ‘Circuit of the Americas’ further stated that in November 2014, Billy Joel received both The Library of Congress Gershwin Prize for Popular Song which honors living musical artistes lifetime achievement in promoting the genre of song as a vehicle of cultural understanding, entertaining and informing audiences, and inspiring new generations, and the once-in-a-century the American Society of Composers, Authors and Publishers (ASCAP) Centennial Award, which is presented to American music icons in recognition of their incomparable accomplishments and achievements in their respective music genres and beyond.

In December 2013, Billy Joel was named Madison Square Garden’s first-ever music franchise, joining the ranks of the storied venue’s other original franchises – the New York Knicks of the National Basketball Association (NBA) and New York Rangers of the National Hockey League (NHL). The record-breaking residency began in January 2014 with Joel playing one show every month at The Garden, “as long as the demand continues,” says Joel.

Joel received The Kennedy Center Honors, one of the United States’ top cultural awards, in December 2013. He is also the recipient of six GRAMMY® Awards, including the prestigious Grammy Legend Award. Joel has been inducted into the Songwriter’s Hall of Fame and the Rock and Roll Hall of Fame and has received numerous industry awards including a TONY AWARD for ‘Movin’ Out’, a Broadway musical based on Joel’s music. For his accomplishments as a musician and as a humanitarian, Joel was honored as the 2002 MusiCares Person of the Year by the MusiCares Foundation and the National Academy of Recording Arts & Sciences.

Joel has also performed alongside other music greats at two of Madison Square Garden’s most extraordinary benefit concerts – ‘12-12-12, The Concert For Sandy Relief’, which raised awareness and money for those affected by Hurricane Sandy and ‘The Concert for New York City’, which was held to help aid 9/11 victims and heroes. Billy Joel received a star on the Hollywood Walk of Fame in Los Angeles, adding another plume to his beret.

Three-day race tickets, which include access to both headlining concerts along with other featured entertainment, start at $189 and are on sale now at www.thecircuit.com. New this year, additional reserved seat tickets will be available at Turn 18 and Turn 19. New hospitality options are also being offered in the Twenty12 Lounge (T12), Podium Club (T20) and Tower Club (T17) areas. Premium on-track viewing upgrades are available for both concert experiences.