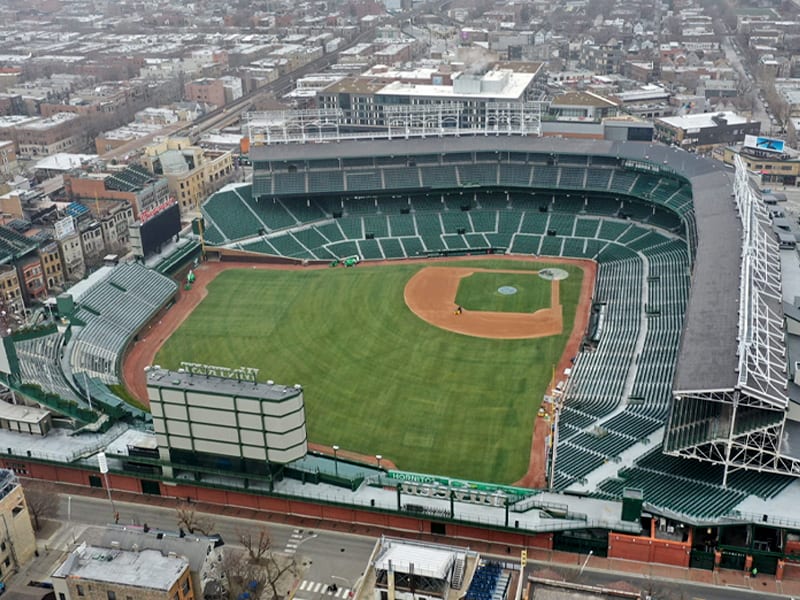 The Wrigley Field baseball park in Chicago, US, has been designated a National Historic Landmark by the United States Secretary of the Interior David L. Bernhardt.

Wrigley Field is a baseball park located on the North Side of Chicago, Illinois. It is the home of the Chicago Cubs, one of the City’s two Major League Baseball (MLB) franchises. It first opened in 1914 as Weeghman Park for Charles Weeghman’s Chicago Whales of the Federal League, which folded after the 1915 baseball season. It was renamed Wrigley Field in 1926.

The Chicago Cubs are an American professional baseball team based in Chicago, Illinois. The Cubs compete in MLB as a member club of the National League Central division. The team plays its home games at Wrigley Field, located on the City’s North Side.

The above move recognizes the 106-year-old stadium as having played a significant role in both the history of the City of Chicago and the American professional sports landscape.

National Historic Landmarks are defined as “buildings, districts, structures and objects that have been determined by the Secretary of the Interior to be nationally significant in American history and culture.”

There are approximately 2,600 National Historic Landmarks in the United States, with Fenway Park (baseball park) in Boston serving as the only other current MLB ballpark on the list.

Remarked Chicago Cubs Executive Chairman Tom Ricketts, “Wrigley Field has a special place in the hearts of generations of fans. That’s why, from our first day as owners, we committed to preserving Wrigley, which will now take its well-earned place in the line-up of American history and culture as a national treasure.”

Wrigley Field became eligible for landmark status in 1987 and the Ricketts family – which became owners of the team in October 2009 – applied for the same in 2013. In 2014, the Cubs initiated the massive 1060 Project, which aimed to renovate and update the ballpark and its surrounding structures.

Commented Bernhardt, “The historical significance of Wrigley Field is interwoven into our nation’s story and it is a key part of what has become America’s beloved pastime for over a century. It is with great enthusiasm that I designate this iconic national treasure, the site of many legendary events, innovations and traditions in baseball history, as a National Historic Landmark.”

Wrigley Field is the only remaining ballpark connected to the Federal Baseball League, the short-lived rival to the National and American Leagues.

It also staged the first tryouts and organization of the All-American Girls Professional Baseball League. And it was home to the Chicago Bears from 1921 to 1970, one of the original franchises in the National Football League (NFL).

Several innovations in baseball history have their origins in the ballpark. In 1916, the original owner Charles Weeghman started the custom of allowing fans to keep balls hit into the stands as mementos.

Wrigley Field has several ‘firsts’ to it – it was also the first ballpark to have refreshment booths behind the stands, and the first to use an organ onsite to entertain fans during games. The Chicago Cubs were among the first to embrace broadcasting home games on radio in 1925 and on television in 1946. These broadcasts drew fans from across the globe and contributed to the popularity of the Chicago Cubs and American baseball.

Many legendary events have taken place in the ballpark, including baseball’s only ‘Double No-Hitter’ in 1917, Babe Ruth’s (American professional baseball player) supposed ‘Called Shot’ during the 1932 World Series and the American professional baseball player Gabby Hartnett’s ‘Homer in the Gloamin’ that helped propel the Chicago Cubs to the 1938 National League pennant.

It was also the location in 1933 of the first NFL championship, the forerunner to today’s Super Bowl.

Wrigley Field’s ivy-covered, brick outfield wall and well-known bleachers behind it were constructed during rehabilitation work carried out in 1937. The 27-foot-high outfield scoreboard was also added at that time. Other improvements include seating renovations, the addition of an upper deck, and the addition of lights for night games in 1988.

Renovations during the multiyear restoration and expansion project initiated in 2014 further enhanced the iconic features of Wrigley Field.

« Previous News: ‘The Blue and White’ get new home
» Next News: 5G leg-up for London Stadium