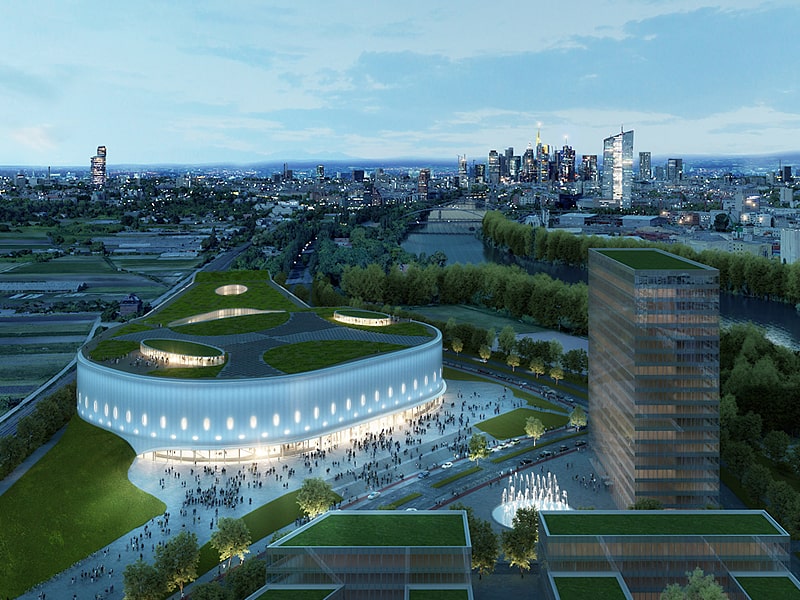 German architect Zvonko Turkali feels that the planned multifunctional arena at Kaiserlei (Offenbach, Germany) will also enliven the whole ambience at Frankfurt Oberrad (Oberrad is a quarter of Frankfurt am Main) in the form of eateries coming up and catering to foodies as well as bringing major acts to the Kaiserlei neighborhood in the German City of Offenbach. The hall will likely host 50 sporting events and around 70 concerts in a year.

However, the residents of Oberrad are wary of the “noise pollution” which the arena will likely produce as well as the fact that it will spoil the pristine serene sheen of the place.

The Kaiserlei multifunctional arena project in Offenbach, Germany, has been in the works for more than 15 years now. It is hanging fire endlessly. The project was shelved and then a glimmer of hope floated in the form of the professional basketball club Skyliners Frankfurt who put fresh lease of life to the development with the support of the Bundesliga club Eintracht Frankfurt in 2021.

The planned venue will sit between the railway tracks which lead through the fields, and Gerbermühlstraße, diagonally behind the old train station.

It may be noted that there is no love lost between the people associated with the ‘The Dome’ project (which is supposed to come up near the Frankfurt Airport in Germany and is Canada’s Katz Group’s dream project) and the Kaiserlei arena development.

The ‘Frankfurter Neue Presse’ further stated that the City is yet to arrive at a decision whether the 23,000-capacity ‘The Dome’ will come up near the Frankfurt Airport or the 13,000-capacity Kaiserlei arena will be built at the above mentioned spot.

As per Wöbke, a “strong partner from the region” is ready to pick up the tab for the Kaiserlei arena.

The architect of the multifunctional hall Turkali envisions an arena “throbbing with activities”.

The hall will not only house the arena, but also a multistory car park, which can be accessed from the Gerbermühlstraße side. Visitors will be able to make a smooth ingress to the various tiers of the arena from the parking spot. In the ground floor, of the parking zone, there will be parking space available for 2,000 bicycles.

Informed Turkali, “It will be a hybrid building and the hall will boast a Green roof (covered with vegetation) and there will also be space on the roof for people to walk as well as sit and enjoy the majestic Frankfurt skyline view. We are also planning to set up food joints on the roof for the gastronomes.”

The residents of Oberrad opined that the hall should enjoy parking space for 2,300 vehicles.

Stated a worried resident Brigitte Zimmermann, “The noise pollution issue has not been taken into consideration by the people who are associated with the development. Two events per week coupled with restaurants and loud music on the roof will surely cause disturbance to the whole neighborhood. Would Oberrad be a place worth to live in if so much of noise emanates from the arena?”

Another local resident feared that such a huge multifunctional hall will spoil the pastoral postcard kind of place that Oberrad is.

If everything goes as per plans, the multifunctional hall – which is proposed to be named ‘Arena am Kaiserlei’ – could get off the ground on September 27th, 2025, for the 2025-2026 seasons, and from then on it will be able to fit in 13,000 spectators for sports and cultural events.

For now, Wöbke and his team are keeping fingers crossed as they have their bête noire in the form of ‘The Dome’ team.