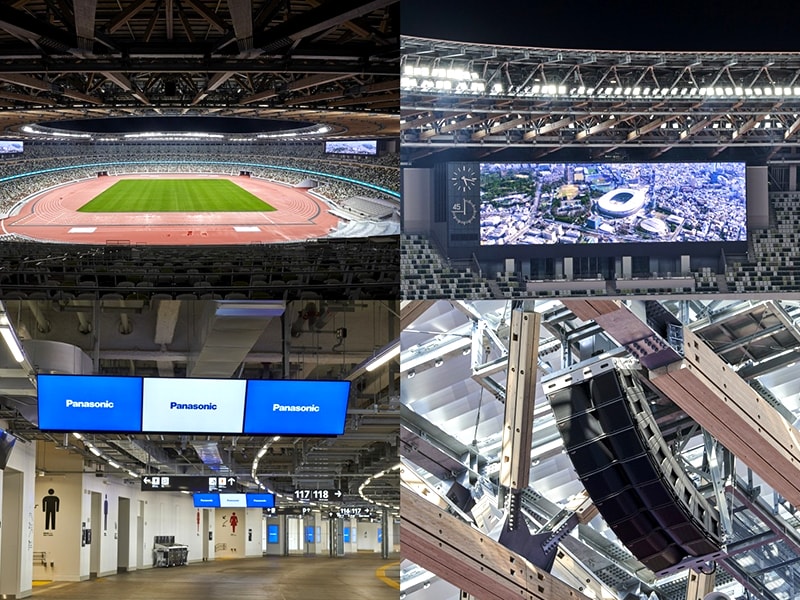 The Japanese multinational electronic corporation Panasonic Corporation has furnished the multi-use New National Stadium which opened in December last year in Tokyo with a wide range of accessories.

The accoutrements are key to stadium operation and comprises large screen displays and audio systems that add to the excitement, the field of play is brightened up by stadium lights and creates an electric atmosphere for fans, as well as approximately 600 digital signage systems, the largest number of such systems ever delivered.

The New National Stadium was built on the site of the old National Stadium, which served as the Olympic Stadium during Tokyo 1964 (knocked down in 2015). The facility will serve as the main stadium for the opening and closing ceremonies, as well as the venue for track and field events at the 2020 Summer Olympics and 2020 Summer Paralympics.

The facility was positioned on the concept – ‘a stadium in forest’ – and the design has been so done that it includes elements of nature like greenery and trees. Despite giving the ‘green’ touch, it is also armed with leading-edge technologies. The venue is uniquely Japanese as it is juxtaposition between nature and technology.

Technology giant Panasonic delivered AV and lighting equipment as it is crucial to liven up the ambience and pull spectators by the horde. Panasonic also set up two 9m x 32m large screen displays on both the north and south sides of the stands, in addition to 38 line array speakers that provides perfect acoustics and ensures sound pressure even on the field, far away from the speakers.

The lighting equipment can be turned on/off instantly thus facilitating the use of lighting much to the delight of fans. The system also has adopted a light source that has been designed to optimize color reproducibility during TV broadcasts.

The 600 digital signage systems delivered by Panasonic for the stands can be push-button controlled and thus provide information to supporters. For each concourse area, different information can be efficiently relayed to spectators.

Panasonic’s stadium solutions are bringing a sea change in the entire way of how fans watch sports. They are offering manifold solutions including audio-visual and lighting solutions, leaving fans delirious.

Panasonic will enlarge on the lure of sports and also contribute to the evolution of stadiums with its extensive range of safe and eco-friendly solutions.