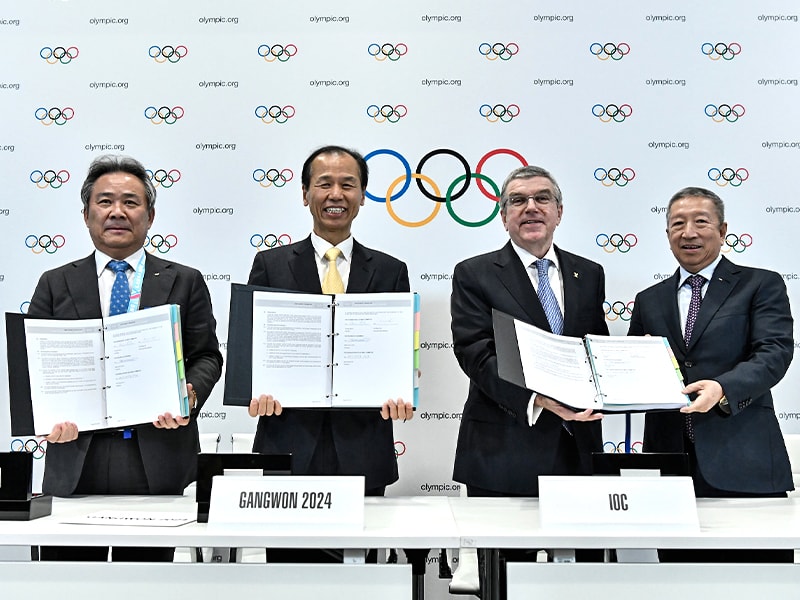 The hosting rights for the 2024 Winter Youth Olympic Games has been awarded to South Korea’s Gangwon Province. The International Olympic Committee (IOC) recently gave the rights to South Korea. In Gangwon Province’s county Pyeongchang where the 2018 Winter Olympic was held, several venues were developed. These venues will be employed for the event.

The announcement was made in the wake of the 2020 Winter Youth Olympic Games which began in earnest in Lausanne, Switzerland. The enthusiasm was palpable with the IOC deciding to have Gangwon as host as part of its scheme of things to ensure a strong legacy for PyeongChang 2018.

Following the Executive Board presenting the proposal in the first week of January, the IOC Session voted to bestow the 2024 Games to PyeongChang and Gangneung. The proposal was mooted by the Korean Sport and Olympic Committee (KSOC) after the IOC in December 2019 held parleys with the former to chalk out a plan to host the Games.

The Session – presented with only one candidate for the event after a recommendation from the IOC Future Winter Host Commission – was rubber-stamped by the Executive Board – voted 79-2 in favour of the candidacy from KSOC. The Host City Contract was then penciled by the IOC and Gangwon 2024.

IOC President Thomas Bach said the decision to award Gangwon Province as the venue for the 2024 Winter Youth Olympics was taken based on the fact that the organization’s widespread reforms to bidding are a “success”.

The 2024 Winter Youth Olympic Games will be the fourth chapter of the Games, and the first in Asia. Said IOC President Thomas Bach, “Consistent with the Olympic Agenda 2020 reforms, the proposed plans by Gangwon 2024 will ensure the Youth Olympic Games remain sustainable and affordable.”

“The Gangwon 2024 proposition enhances the legacy of PyeongChang 2018. The interest shown by many regions around the world in hosting future Olympic and Youth Olympic Games demonstrates that our new approach, based on constant dialogue, flexibility, sustainability, legacy and creating a project together, is the right approach,” he asserted.

Romania’s Octavian Morariu, Chairman of the IOC Future Winter Host Commission, said the proposal from the South Korean region is “a perfect example of how the whole approach has changed”.

Gangwon Province submitted its intent to stage the Games to the KSOC on September 30 last year, before the delegation visited the IOC on November 7, 2019.

The IOC maintained that Gangwon can go on to benefit from many of the arenas used in PyeongChang 2018 for the Winter Youth Olympic Games, as well as possible alternative venue options. The competition will be in line with the Games concept adopted in 2018 and mountain sports will be held in PyeongChang and ice sports in Gangneung.

The blueprint will be given the final touch during a co-creation period, during which the IOC and Olympic stakeholders will join forces with the elected host. During this period, the sports program and a detailed budget will also be developed.

To make certain that the legacy of the Winter Olympics would continue to reap rewards for the region for decades to come, the PyeongChang 2018 Legacy Foundation was floated in 2019. In September 2019, the incumbent Governor of Gangwon Province, Choi Moon-soon, gave details of the legacy plans for three stadia from PyeongChang 2018, adding that a bid was set to be made for the 2024 Youth Olympic Games.

The legacy plans concerned Gangneung Oval, Gangneung Hockey Centre and the Olympic Sliding Centre in PyeongChang. Olympic speed skating events which were held in Gangeung Oval will become a multi-use space for sports and convention facility, while Gangneung Hockey Centre will be the venue for sporting events and art performances. The Olympic Sliding Centre is all set to become a sports experience facility. Venues for curling, snowboarding, ski jumping, cross-country skiing and biathlon will remain intact and continue to host sports competitions. They are set to be put in order for Gangwon 2024.

“The Korean Government is committed to providing the necessary support to ensure that the Gangwon 2024 Youth Olympic Games are a great success,” informed Park Yang-woo, Minister of Culture, Sport and Tourism and head of the Gangwon 2024 delegation.

“We will continue the strong legacy of the recent Olympic Winter Games in PyeongChang and work to achieve our vision of expanding new horizons in sport,” he averred.

Romania’s Octavian Morariu, Chairman of the IOC Future Winter Host Commission, commented that the proposal from the South Korean region is “a perfect example of how the whole approach has changed”.

The Future Winter Host Commission held its first meeting on November 22 last year and stated that “no other viable hosts” of the event had come forward by that date.

Morariu further revealed that Barcelona, Salt Lake City and Sapporo are interested in hosting the 2030, 2034 or 2038 Winter Olympic Games.

The arenas will be split across Pyeongchang and Gangneung, which staged events at the 2018 Winter Olympic and Paralympic Games.

The exact location of Alpine skiing has not yet been confirmed. Organizers have broached the High1 Resort as a viable venue for the sport, which was not utilized during Pyeongchang 2018.

The speed events which were held at Jeongseon Alpine Centre during Pyeongchang 2018 have not been incorporated into the venue master plan amid concern over the future of the facility.

Officials in the region are yet to arrive at a decision on whether the Centre will be retained or deforested, while legacy plans from the 2018 Winter Games have not yet been brought to a conclusion.

Yongpyong has been zeroed in as the main facility for Alpine skiing at the Winter Youth Olympics in four years’ time, nevertheless, Gangwon 2024 officials are more interested in the use of High1 Resort, despite being at a distance of more than two hours from the Athletes’ Village.

The location of Youth Olympic Village will be Gangneung-Wonju University, where volunteers were housed during Pyeongchang 2018.

Park Yang-woo claimed they were “willing to have North Korea on board”. Despite thaw in ties in the region, the IOC has insisted the door remains open for North Korea staging events during the Games.

Seoul has always been at the receiving end from Pyongyang since the summit between the Supreme leader of North Korea Kim Jong-un and United States President Donald Trump in February 2019 failed to break ice.

Though the possibilities of North Korea coming on board to host the Winter Youth Olympics in 2024 seems dim at this stage, but should that materialize, it would make history as it will be the first time the two countries will organize a major Olympic event in tandem.

Though North and South Korea are hoping against hope to jointly bid for the 2032 Olympic and Paralympic Games, chances of their candidacy coming to fruition seems nil amid an almost entire shutdown of inter-Korean dialogue in recent months.

As of now, Gangwon province boasts all the facilities for the winter event. Gangwon 2024 draws upon the successful delivery of the Olympic Winter Games PyeongChang 2018 and aims to continue their vision of bringing sport to a new generation of winter athletes. The hosting of the Winter Youth Olympic Games leverages the significant investment that the Republic of Korea has made into developing winter sport in the country and throughout Asia.

The objective of PyeongChang 2018 Legacy is to continue the development of winter sport in Asia, spread the Olympic values to the young generation through various sports and education projects, and also manage several venues that were used at the Olympic Winter Games. This year, the Foundation will oversee Olympic values education camps for 20,000 students around the country and also host the annual Dream Programme, now in its 16th year, by providing winter sports training camps to young people from across the globe.

From the very beginning the IOC had made it clear to the KSOC that if circumstances allow it would be ready to accept the Olympic Committee of the Democratic People’s Republic of Korea as a partner in the holding of the Fourth Winter Youth Olympic Games.