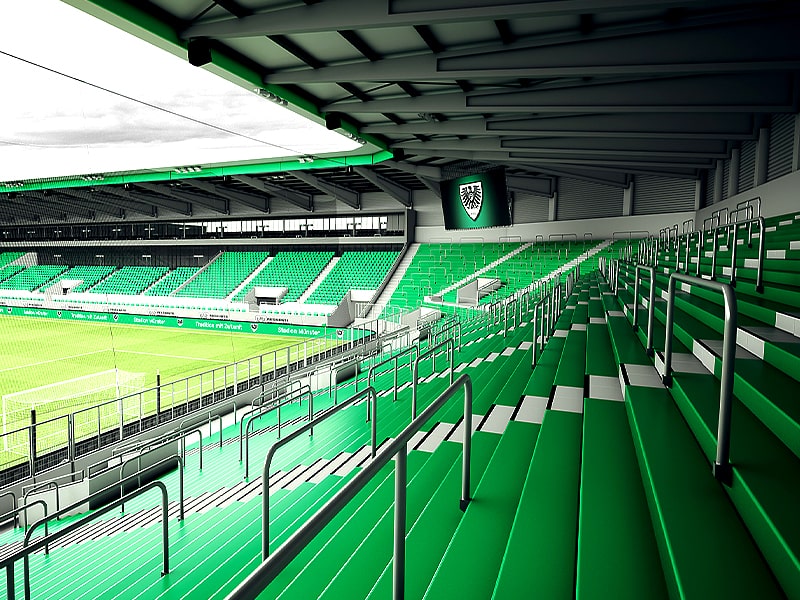 The German sports club SC Preußen Münster carried out a feasibility study on its home venue – the Preußenstadion in Münster, Germany.

The ‘Preussen Muenster’ stated that an updated feasibility study shows the possibilities of timelines and at what price tag the stadium on Hammer Straße can be expanded and renovated. The consulting company Drees & Sommer SE, which specializes in construction and real estate and is based out of Stuttgart (Germany), carried out the study. The update specifies the first feasibility study by the architecture office Albert Speer & Partner (Frankfurt). Representatives from Drees & Sommer and their cooperation partner CSIGHT presented the revision to everyone involved in carrying out the feasibility study recently. While the first study presented several expansion variants, its update is devoted to the version of the future stadium, which the Council had voted in favor of in May 2020.

SC Preußen Münster is a German sports club based in Münster, North Rhine-Westphalia (Germany) which is mostly recognized for its football section. The football team currently plays in Regionalliga West which is the fourth tier in German football. Preußen Münster also fields teams in tennis, athletics, handball, and fistball.

Announced City Director Thomas Paal, “Which of these modules can be implemented under which framework conditions should be submitted to the Council for a decision in Summer 2022.”

Forty million euros will be spent for the expansion of the stadium – subsidies and other funds from investors, from SC Preußen Münster itself or from future operators are to be added.

As early as February 2021, the Council decided to have the planning and construction delivered from a single source. A general contractor (TU) will be sought via a detailed invitation to tender, who will expand the stadium as required with an extended deadline and cost security. The Drees & Sommer consultants held several workshops to work out modalities regarding the same. While working out the modalities, the interests of DFL and DFB as well as fan interests were also kept in mind.

Project leader Dr. Christina Cappenberg thanked all those involved for the constructive exchange in the workshops – “We have thus created a resilient basis for a needs-based stadium expansion.”

In the latest feasibility study recommendations, the guest area has been moved to the Southern area of the new West stand. The main entrance on Hammer Straße can become the central access for home fans, as all of these areas are accessible from there. In order to meet the requirements of the DFL and DFB, minor modifications to the main stand in the South end is necessary. The updated grandstand concept offers enough space for the almost 200 wheelchair user positions required by the NRW Special Building Ordinance. According to the current status, the stadium could offer space for up to 19,400 spectators.

Highest priority has been accorded to the sustainability factor. A study was carried out on setting up a photovoltaic (PV) roof. Renewable energy and water harvesting are also on the agenda. The number of parking spaces for cars should be reduced, as per the study.

Huge financial injection can be accepted if it brings about a permanent reduction in operating costs. For the implementation of several modules – for example, the mobile station, the optional corner building in the Southwest or the sports daycare center – it makes sense to rely on third-party funding, the feasibility study pointed out.

The schedule for the expansion of the stadium extends from 2022 to 2027: As an early measure, two additional playing fields are to be built in the coming year – the green light for the same given in December 2021. The dismantling of the West stand is scheduled to take place during the 2022 break. At the same time, the TU tender is being prepared. The most important is the Council decision to be made in 2022 Summer on the construction modules to be implemented and all financing components. Once a general contractor is appointed, all structural conversions will take place without hampering sporting activities.