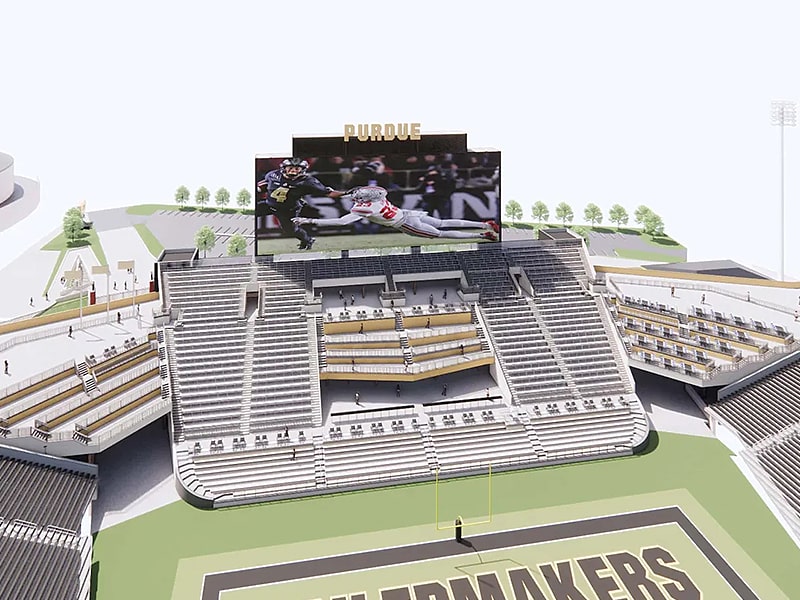 After years of discussion and previous renderings that looked futuristic, finally, an idea is emerging of what the South end zone of the future will look like at the Ross–Ade Stadium in Indiana on the campus of Purdue University (US).

‘SB Nation’ stated that recently, the Athletic Department revealed renderings and a timeline for Phase 1 of the long awaited Ross–Ade Stadium renovation.

The 57,236-capacity Ross–Ade Stadium is a stadium in West Lafayette, Indiana, on the campus of Purdue University (US). It is the home field of Purdue Boilermakers football. The stadium was dedicated on November 22nd, 1924, and named in honor of Purdue alumni George Ade and David E. Ross.

‘SB Nation’ further stated that in the last five years, lights and a new scoreboard has been added, and the old South End zone bleachers were replaced by the patio several years ago, but this is the first significant overhaul of the whole stadium since 2002.

The details can be found here, but overall the look is appealing. There was design a few years ago that had the South End zone as a big football complex, but the new performance center attached to the Mollenkopf serves most of that role. This new design is the largest part of Phase 1 and it will enclose the stadium finally with entrance tunnels now on the Southeast and Southwest corners. Gone is the famous Morgantown tent, replaced by the new student section and terraced club areas. The band will also now be down in front.

The Mollenkopf Athletic Center, built in 1990 at a cost of $10.3 million, has a full indoor practice football field plus spacious sidelines – totaling 92,400 square feet – and reaches 86 feet high at the peak. It was named for Hall of Fame head coach Jack Mollenkopf (1956-1969), who led Purdue to the 1967 Rose Bowl.

Overall, this will increase capacity by about 4,500 people. The student section will be larger and consolidated in one end. Purdue would surely love it that the East stands will have some higher priced seats now too.

The other major part of this phase is a new player entrance tunnel in the Northeast corner. Currently, the team has to cross the John Wooden Drive and come through the stairwell tunnel on the Southeast side. The new tunnel will come from the Northeast side and go under the Wooden Drive.

It looks like an entire section will be cut out of that part of the horseshoe, kind of like the 42,319-capacity Great American Ballpark in Cincinnati, Ohio, US.

Construction will begin on the project after the Northwestern game in November, and it should be done by next season. It has been fully funded by donors and Phase 2 (which will likely be extensive) will start with more donor support.