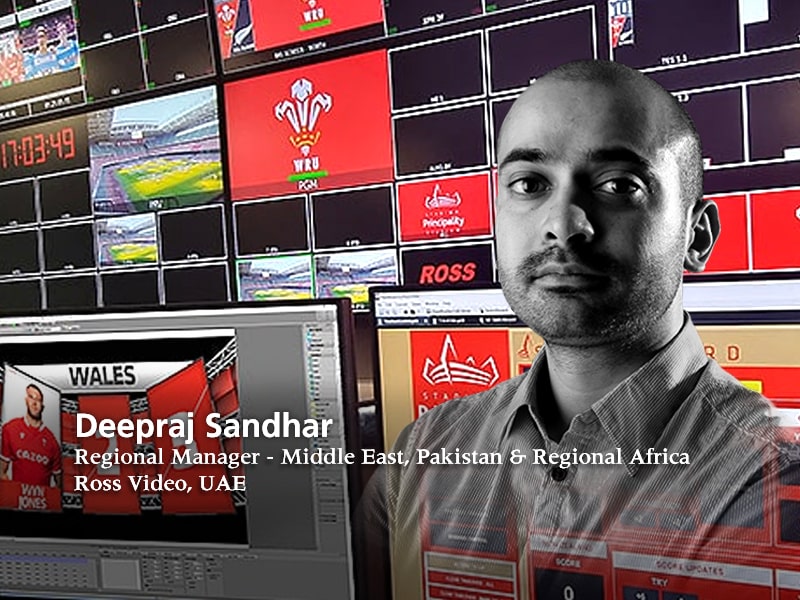 Deepraj Sandhar is in the role of Regional Sales Manager at Ross Video. He has worked in the media production industry for 20 years and started his career in post-production. Sandhar then moved into the broadcast sector, working with enterprise customers across the MENA region and holding a variety of roles including workflow consultancy, system architecture and account management.

Ross Video Limited is a privately-held Canadian company that designs and manufactures equipment for live event and video production. Ross delivers dependable technology and services that power exceptional live video productions seen by billions of viewers around the world every day. Ross Video’s goal is to make it easy for customers to create compelling news, weather and sports broadcasts, engaging material for sports stadium screens, legislative assemblies, entertainment shows and rock concerts, and inspiring content for houses of worship.

In an exclusive talk with ‘Coliseum’, Deepraj Sandhar , Regional Manager – Middle East, Pakistan and Regional Africa, Ross Video, UAE, dishes out details of how Ross Video’s cutting-edge Unified Venue Control Solution consists of a powerful yet easy to use set of video production tools which is a kind of one-stop shop where a single button is used to carry out multiple tasks and helps streamline things. He also presents an interesting case study of Principality Stadium refresh and also highlights how LED displays play a pivotal role in enhancing the fan’s in-venue experience.

Informed Deepraj Sandhar, “We are Ross Video. We have about 1,000 employees and we are based in Canada but we have a global footprint and working on multiple different projects in different areas.”

Ross Video is providing tools for:

He puts in, “Ross Video is doing a lot of different things. Historically, we come from a traditional market and are combining the tools we provide and also the services. We are providing a live AV production system to many of the different sectors.”

The sports and live events team

Talking about sports and live events, Sandhar termed it as a “Very interesting market and what is an esports arena, a National Hockey League (NHL) arena, a National Football League (NFL) arena, an ice hockey arena. All of these live events and all of these customers are looking for the same trend and that’s a trend which we picked up on in the last four or five years.”

He further added that the same tools that are present in the core market are now being taken by the above venues at the same time as well -“So, what are the trends that we see for all of these different venues? We are talking about a venue experience.”

Sandhar stated that venue operators while trying to get fans into the stadium pull out all stops to ensure that spectators get the best of in-venue fan experience and are “wowed” by that experience – “It could be leading up to the event, during the event and after the event. So, how does one actually do that? Ross Video ensures that content is being delivered to them so it could be filling the LEDs with data, with graphics, during the game or during the event, during replays like in football replays of the actual game at the same time as well.”

When fans savor an out-of-the-world in-venue experience, they spread the word that attending an event/match in a particular venue is bang for the buck – “It is very similar to cinema experience. People go to watch cinema because they are getting that experience which they cannot experience back home.”

Sandhar pointed out that venues today want to give crème de la crème facilities as well as offerings to fans – “The trend has come from North America. We have seen this trend in NFL stadiums and that trend has been moving through from America, into Europe, Middle East, and so on and so forth.”

LED displays play an important role to sweep off feet today’s tech savvy fans. The all-encompassing fan engagement happens between the exterior and the main seating bowl as LED displays are present at every aspect of the event experience.

The 62,850-capacity Tottenham Hotspur Stadium in London (UK) is one arena which provides fans with an exhilarating experience. It believes in the fan-first approach and the main seating bowl where the event takes place is equipped with LED screens to create the desired gameday experience as Sandhar stated, “The stadium reinforces the fact that a venue should be multipurpose. The new Tottenham Hotspur Stadium also addresses the NFL market so they need to ensure that they can change the venue based on the customer base coming in at the same time as well.”

He further pointed out that the HyperX Arena in Las Vegas (US) will always remain an esports arena – “They are focusing on their core market. Fans make it a point to come back to the arena to watch a live esports event as they are left ‘wowed’ by all these LEDs and game data coming in.”

He provided, “The Principality Stadium is in Wales (UK) and is an existing stadium. The above trend of getting people into the venue also applies for Principality Stadium as well. It sits in the heart of the City and they may have this halo effect when they are working with the local community or competing with the local community – getting people into the stadium.”

Sandhar further provided that when Ross Video took up the Principality Stadium project -technology refresh – “We discussed in details as to what tech bells and whistles they wanted in the stadium.”

He informed, “Ross Video has made it possible that fans get different camera angles, replays, game data, and football data coming in. The same type of production is also now happening inside of the stadium. So, even though fans are inside the stadium, they can look at the main LED, and they will get the same type of broadcast quality production they would have at home. Since they are inside the facility, they are also enjoying the other additional elements at the same time as well.”

Venue control is a pertinent issue. It’s great to have plush lighting system, great graphic system, video system, excellent audio system in a stadium -“What Ross Video facilitates is custom interface. And all at the press of a button by the Director, that button can trigger the lights, the graphics and the audio at the same time. It is not a case of people jumping around and trying to fix the lights or the audio. It is a very streamlined exercise. We have a unified system which will control the whole venue.”

He asserted that its “great” having such futuristic technology in place but if one can’t make use of that technology, “It is just sitting dead inside the backroom. So, we make sure we are providing technology, services, graphics, but also the key thing is that operationally, it is easy to use.”

With TV coverage of live sporting events becoming increasingly sophisticated, sports teams and stadia are working through the sweat of their brows to lure people to come out of their comfortable couches and into the venue.

Of late, LED video displays in a stadium are adding to the fan experience helping to engage them from the moment they arrive at the stadium. LED technology is connecting with and engaging viewers wherever they are in and around the stadium. Earlier, the focus was on the event itself but today the focus is on the overall fan experience. And it is Ross Video’s seamless technology which is helping arenas like the Principality Stadium and the Tottenham Hotspur Stadium carve a special place in the minds of the fans.