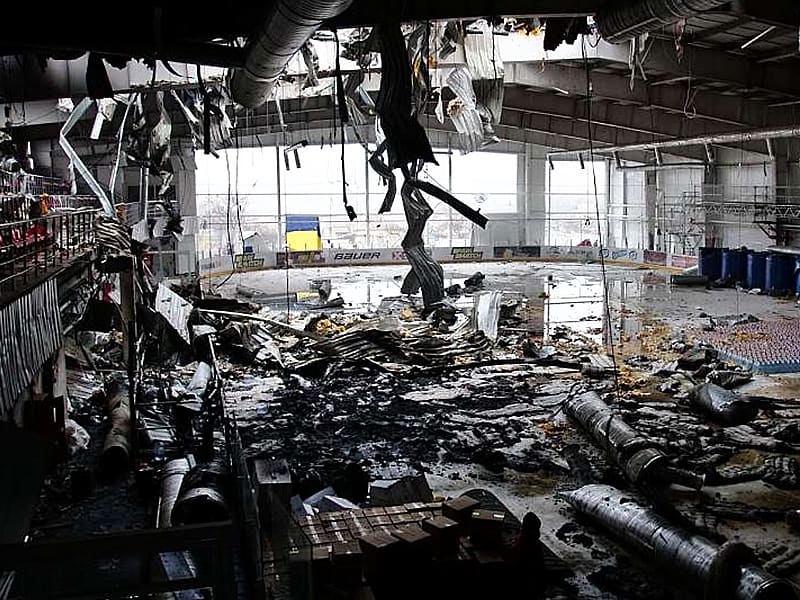 The home ground of the top-flight Ukrainian professional ice hockey team – the 400-capacity Altair Arena in Druzhkovka, Ukraine – got destroyed in a Russian missile attack on January 2nd, as per the Ukrainian Ice Hockey Federation.

‘HC Donbass Donetsk’ stated that on the night of January 2nd, Russia launched two missile strikes on the City of Druzhkivka. Consequently, the Altair ice arena got completely destroyed in the missile strike.

The rink served as the home arena for HC Donbass, who moved in after their former facility in Donetsk was destroyed in a fire when war between Ukraine and the pro-Russian separatists erupted in Donetsk Oblast (Eastern Ukraine) in 2014. According to multiple reports, the arena was being used to store humanitarian aid.

‘HC Donbass Donetsk’ further stated that the Altair Ice Arena was built in 2013. Since then, children of the area started playing hockey on the ice rink. During the 2015-2016 seasons, the Druzhki Arena became the home of HC Donbass as part of the XXIV Championship of Ukraine.

Every year, the arena hosted children’s and youth competitions, international tournaments, cultural and mass events, and was a favorite hangout place for the people of Druzhkivka.

‘yahoo!movies’ stated that war between Russia and Ukraine rages on with no end in sight. The war has resulted in a humanitarian crisis in the Eastern half of Ukraine, forcing millions of refugees to leave their homes. The fighting has affected virtually every corner of the Ukrainian society, including sports, as further evidenced by the destruction of Ukraine’s above facility on January 2nd.

‘yahoo!movies’ further stated that the Ukrainian Foreign Minister Dmytro Kuleba reacted to the latest missile strike by doubling down on his call for Russian athletes to be banned from international sporting events – “I invite all sports officials who want to allow Russian athletes to compete in international events because, as they say, ‘politics should be kept out of sports’, to visit the Altair ice arena in Druzhkivka ruined by Russia’s ‘politically neutral’ shelling.”