Populous-designed France arena get off ground 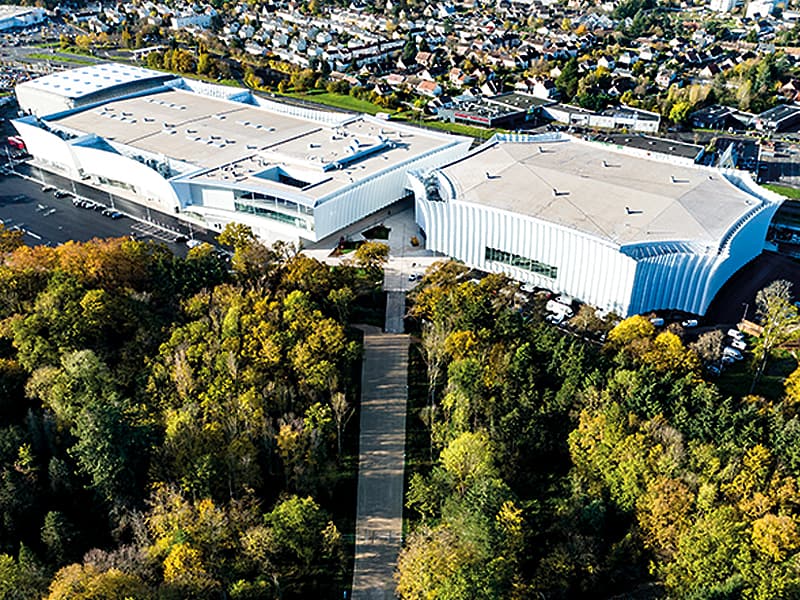 Populous, the global sports and entertainment venue architectural design firm, has completed its work on Arena Du CO’Met, the final part of a major new sports and cultural complex that has been created in the French City of Orléans, located on the banks of the Loire, 75 miles Southwest of Paris, France.

‘Populous’ stated that the 10,000-seat arena opened to the public on January 7th, 2023, with an inaugural men’s handball tournament featuring the French national team before it departs to take part in the World Men’s Handball Championship, to be held in Poland and Sweden from January 11th-29th, 2023.

Kansas City, Missouri (US)-based Populous is a global architecture and design practice that has led the design and delivery of some of the most iconic sports and entertainment projects across Europe and around the globe, including the 62,850-capacity Tottenham Hotspur Stadium in London, England (UK), the 20,000-capacity The O2 Arena in London, Lyon’s 59,186-capacity Groupama Stadium in Décines-Charpieu, France, and the newly-opened 17,459-capacity Climate Pledge Arena in Seattle, US.

The Centre Orléans Métropole (CO’Met) is the first multifunctional facility in France to combine an arena, conference hall and exhibition center in one location – the French City of Orléans – in addition to the existing and neighboring Zénith d’Orléans, a 5,000-seat indoor sporting arena and concert hall. It will enable Orléans to host, in a same location and at the same time, national and international sports, cultural and economic events.

‘Populous’ further stated that working alongside the project architect Ferrier Marchetti Studio, Chaix & Morel and Associates as Lead Designer of the center’s conference and exhibition facilities, and Bouygues Construction as the contractor, Populous is the designated sports architect for the seating bowl and interiors of the 10,000-seat arena, working to deliver a first-class fan experience in a modern and sustainable sports and entertainment venue for Orléans and the wider region.

The arena has been designed to host the majority of indoor sports, concerts and large-scale shows, with a 3,000 m² platform and modular stands for up to 10,000 seats. With the Paris 2024 Summer Olympics fast approaching, it has also been approved for international competitions in volleyball, handball, badminton, boxing, gymnastics, judo, athletics and basketball, with Orléans Loiret Basket – the arena’s resident club.

Orléans Loiret Basket, formerly known as Entente Orléanaise and Entente Orléanaise 45 Loiret, is a professional basketball club that is based in the City of Orléans, France. ‘45’ is the number of Loiret. The club plays in the French Pro B League.

A ring of 28 boxes, housing between nine and 30 seats, is surmounted by a 360-degree LED banner screen, providing 260 linear meters for advertising, as well as an impressive LED cube, to replay action and enhance the event experience.

A large range of premium seats, including courtside seats, are available, as well as a VIP area of over 1,000 m², partitionable into several lounges.

The project is the latest completion by Populous France, based out of Paris. The other current projects include the 26,109-capacity La Meinau Stadium in Strasbourg, France, and the 16,000-capacity Olympique Lyonnais Groupe indoor venue in Lyon, France.

Said Francois Clement, Senior Principal at Populous and the General Manager of Populous France, “This project represents an important step forward in the continued development of Orleans’ cultural and business offering and will attract visitors from across France. As we continue to expand our business operations in the country, Populous is proud to have delivered an arena that will not only play a central role in the sporting events program for the region but stands ready to serve as a world-class performance venue for athletes training for a variety of sports at the Paris 2024 Olympics.”

Instead of a single, multipurpose building, Orléans Métropole opted for a modular and complementary set, comprising the ‘The Loiret’ exhibition center, which can be expanded from 16,000 m² to 33,000 m² and divided into four halls, the convention center – including a 1,000-seat auditorium with optimized acoustics – and the arena.

Populous-designed France arena get off ground