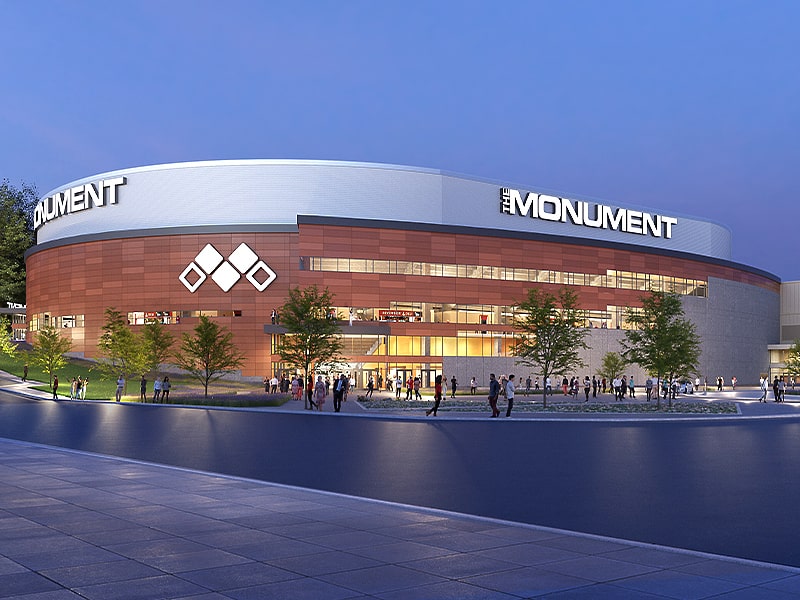 Image: Perkins and Will

The soft opening of the Summit Arena at The Monument (US) took place on November 11th. Members of the community and the project team gathered with a half-house show featuring pop duo For King & Country (Australian brothers Joel and Luke Smallbone). The full capacity official opening will take place on November 21st with the American country band – The Zac Brown Band.

Summit Arena at The Monument will be a new multipurpose, indoor arena located on the West side of the existing Rushmore Plaza Civic Center in South Dakota (US). The nearly 250,000 square-foot arenas will be home to Rodeo Rapid City, Black Hills Powwow, Lakota Nation Invitational, and other sports and entertainment events.

The new multipurpose, indoor arena will function as a 250,000 square foot addition to the existing Rushmore Plaza Civic Center.

‘Perkins & Will’ stated that the new $130 million Summit Arena is a dynamic addition to the West side of the existing Rushmore Plaza Civic Center and will host a multitude of event types including sporting events, concerts, dirt shows, trade shows, and conferences attracting more visitors and ultimately growing the economic impact to the City.

The new arena focuses on the patron experience at all levels, including a design that is not only ADA-compliant but strives to be inclusive in all areas. From sightlines and egress to specialized amenities and the most efficient bowl configuration, the overall goal of Summit Arena design is to optimize each event experience for the visitor. With a maximum seating capacity of 11,500 for a center stage concert set-up, the arena will allow the City of Rapid City to not only host all the events that have a history in the venue but also large concerts, sporting events and other culture events that the building could not accommodate previously.

‘Perkins & Will’ further stated that Summit Arena has a flexible 85’x200’ floor setup and was designed utilizing a unique bowl configuration. It is often described by visitors as an asymmetric bowl with a balanced configuration, where there is an elevated mid/upper bowl with two stacked 10,000 square foot premium levels. By elevating the upper bowl and providing access off an expanded main concourse, all services such as concessions, grab N go’s, bars and restroom are shared by upper and lower bowl patrons. From an operations perspective this reduces the number of required staff members needed to operate the facility and keeps all services open for all events. It also has the inherent benefit of reducing the overall square footage of the arena maximizing the efficiency of the venue.

The previous Barnett Arena, which was built in 1977, is not a viable large concert venue due to its limited infrastructure and size but will be utilized as overflow floor space at stock shows, industry shows, tournaments and powwows as the two facilities are connected at the Event Level.

The Summit Arena is opening to a full lineup of winter events to be enjoyed by the community and the entire region.

Chicago (US)-headquartered Perkins & Will, an interdisciplinary, research-based architecture and design firm, was founded in 1935 on the belief that design has the power to transform lives. Guided by its core values – design excellence, diversity and inclusion, living design, research, resilience, social purpose, sustainability, and well-being – the firm is committed to designing a better, more beautiful world.

With an international team of more than 2,000 professionals, the firm has over 20 studios worldwide, providing integrated services in architecture, interior design, branded environments, urban design, and landscape architecture.