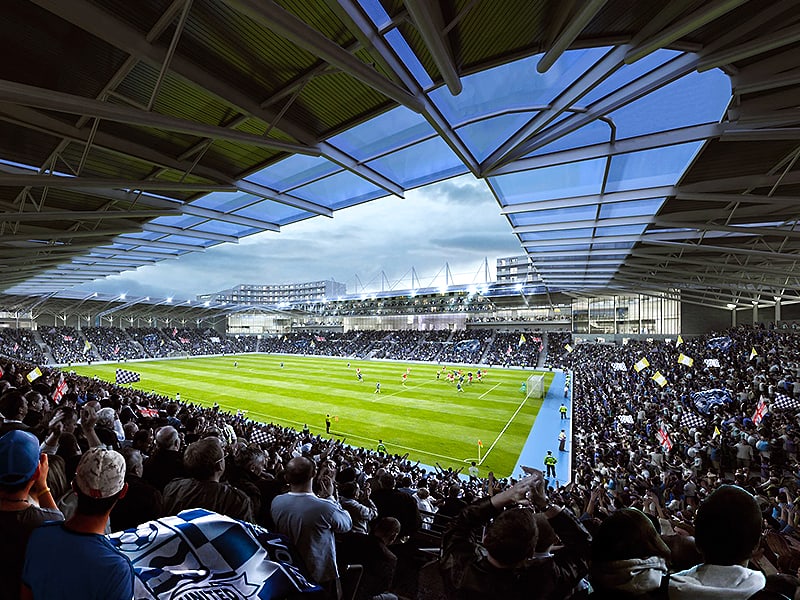 The National League team Southend United F.C. (UK) plans for a new 21,000-capacity stadium designed by the celebrated design studio Populous have been approved by the Southend-on-Sea Borough Council.

The ‘Populous’ stated that the planning approval unlocks the club’s long-held ambition to relocate to a new purpose-built stadium at Fossetts Farm in Southend-on-Sea (UK), which will provide the improved capacity and caliber of player and spectator facilities required for Southend United F.C. to usher in a new era of success, both on and off the pitch.

The Southend United Football Club is a professional association football club based in Southend-on-Sea, Essex, England. As of the 2021-2022 seasons, the team competes in the National League, the fifth tier of English football.

The ‘Populous’ further stated that the stadium is designed to be the catalyst for the creation of a whole new neighborhood in Southend-on-Sea, with 1,491 homes to be built as part of the Fossetts Farm development, including 439 affordable homes for the local residents. The stadium scheme includes 347 residential units designed by the London-based architectural practice CZWG. Outline permission has been granted for up to a further 1,114 residential units to be built as part of the wider development.

This initiative will also pave the way for the regeneration of Roots Hall, Southend United F.C.’s existing but outdated stadium, which will be redeveloped to provide 502 new homes for rent.

Populous’ designs fulfill Southend United F.C.’s ambition to create a mixed-use stadium development and will deliver a range of assets generating economic activity throughout the week. A hotel and conference facility and mixture of retail and commercial spaces will sustain the residential development and promote continuous use of the stadium. Football training facilities will further encourage footfall and activity within the area.

The stadium architecture wraps 360 degrees around the building. The stands will be fully covered and fully enclosed, providing enhanced levels of comfort and enclosure for the fans. Populous’ approach to the stadium with the façade and roof broken down into shells separated by blue polycarbonate strips reflects the club’s heritage and badge with its shrimper’s motif. The shell-like forms incorporated into the roof structure extend beyond the front row of seating, providing spectators with cover and protection from the elements, while the design will also direct the roar of the crowd onto the pitch – creating a cauldron of noise and an intense matchday atmosphere.

Phase One of the development, which is projected to be delivered by 2023, will involve the construction of the three-sided general admission parts of the new stadium, as well as Supporters Way – a tree-lined approach that will be used by the majority of fans on matchdays. Supporters Way opens into a large fan plaza, providing generous open space for people to meet and gather outside the stadium on both matchdays and non-matchdays, over and above a large video board acting as a focal point. The fan plaza will also be enlivened by the presence of the club shop, café and ticket office, which project into the plaza from the South Stand.

The second phase of the project will complete principal parts of the development and overall masterplan, including the stadium’s North Stand, indoor football domes and residential buildings.

Maintained Mike Trice, Senior Principal at Populous, “With the Council’s support of this application, we now have a clear path to the delivery of the club’s long-held ambition for a new stadium. We now look forward to delivering Southend United’s vision to integrate homes, business, leisure, and sport together under one roof. This will prove to be a vibrant and active development and will deliver the very best new home for the fans and the club.”

Stated Sanjiv Gohil, Director at CZWG, “This exciting project for Southend F.C. demonstrates how successful collaborative working between two firms of architects, each working to their strengths, can be on a mixed-use scheme of this nature.”