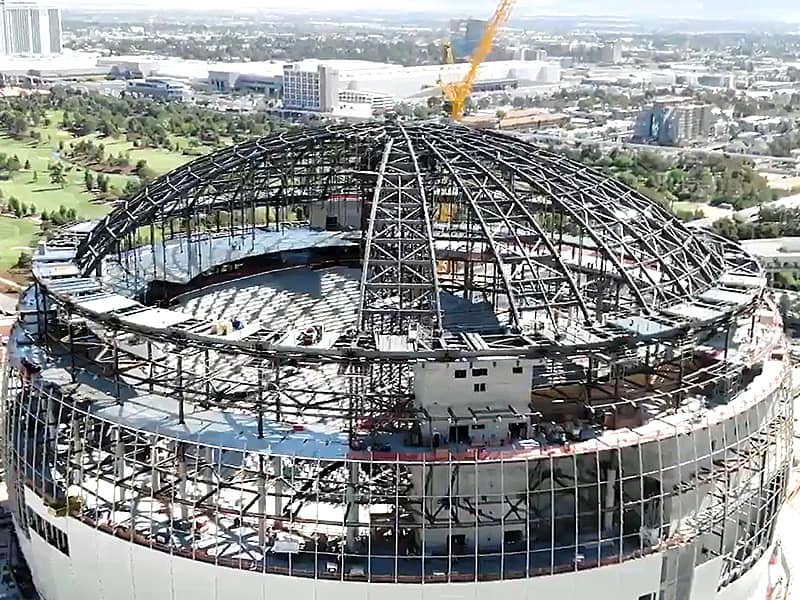 The company building the MSG Sphere at The Venetian (US) said recently that the cost of the 17,000-person performance venue is likely to jump by 10 percent to $1.826 billion.

The ‘Las Vegas Review-Journal’ reported that the company’s announcement of a higher price tag came as no surprise and the company officials had already presumed that the price tag will go up.

MSG Sphere at The Venetian is a sphere-shaped music and entertainment arena being built in Paradise, Nevada, near the Las Vegas Strip and East of the Venetian resort (US). The 17,500-seat auditorium was initially scheduled to open in 2021 but construction was suspended in late March 2020 due to a disruption in the project’s supply chain caused by COVID-19 which had the United States in its fatal grip till few months back. Construction resumed later that year, with the opening rescheduled for 2023.

Madison Square Garden Entertainment Corp. said in a quarterly earnings release that with the coronavirus scenario getting better in the US with vaccine rollout, capacity restrictions have continued to ease for the company’s entertainment venues in New York.

New York (US)-based MSG Entertainment is a world leader in live experiences with a portfolio of iconic venues and entertainment brands.

The ‘Las Vegas Review-Journal’ further reported that following the company’s third quarter, which ended March 31st, New York authorities allowed Madison Square Garden, home of the New York Knicks National Basketball Association (NBA) team and the National Hockey League (NHL) New York Rangers to operate at 10 percent capacity – the Garden’s first events with guests since March 2020. Following the end of the quarter, New York State officials announced that indoor venues with capacities of over 1,500, including The Garden and the company’s other New York performance venues, will be allowed to run at up to 30 percent capacity beginning May 19th.

Restaurant capacities also are affecting MSG properties. The company said that while indoor dining restrictions also eased during the quarter, many of Tao Group Hospitality’s venues continued to operate with significant capacity restrictions and others remained closed throughout the quarter. Since the close of the fiscal 2021 third quarter, the Las Vegas restaurant capacity increased to 80 percent on May 1st and it was announced that the New York City restaurant capacity increased to 75 percent beginning on May 7th, before going to 100 percent on May 19th subject to certain social distancing requirements.

Observed James Dolan, Executive Chairman and CEO, MSG Entertainment, “It’s clear that people are eager for opportunities to gather together, and as capacity limits for our venues continue to increase, our company, with its unique collection of live entertainment assets, will be well-positioned to meet this pent-up demand. Looking ahead, we also believe the MSG Networks transaction would further strengthen our portfolio and help set the stage for long-term value creation for all shareholders.”

The company said it continues to make significant progress on the construction of MSG Sphere. Last February, the company announced that the venue’s cost estimate, inclusive of core technology and soft costs, was around $1.66 billion.

Several factors – including the ongoing effects of the global pandemic and its impact on the global supply chain – have affected and will continue to affect that estimate. Associated costs of materials and labor, as well as changes to project design, scope and schedule have also added to the cost, the company said.

Consequently, the company estimates the cost of the venue has increased by about 10 percent. Relative to the cost estimate, the company’s actual construction costs for MSG Sphere through March 31st stood at about $712 million, not counting $65 million paid by Las Vegas Sands Corp. in the 2020 fiscal year and include $62 million of expenses that were unpaid as of March 31st.

The company remains committed to bringing MSG Sphere to Las Vegas, which it expects to get off the ground in the year 2023.

« Previous News: Community first in Bologna home revamp
» Next News: Fans to be greeted back in England stadia