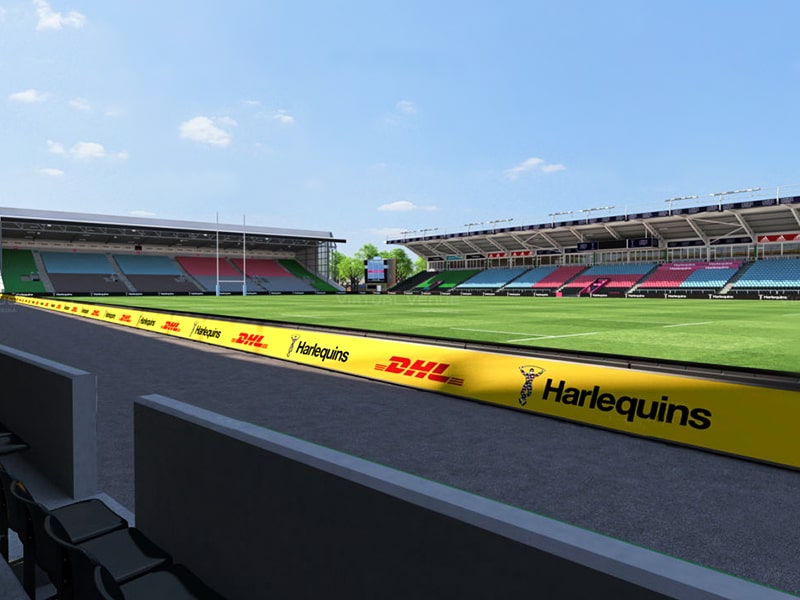 Harlequins F.C. is the first rugby club in the United Kingdom to launch with Ticketmaster’s fully integrated purchase experience, 3D Virtual Venue, that will give supporters a unique life-like view of their seats when purchasing a ticket to attend matches at their residence – the Twickenham Stoop Stadium in Twickenham, England (UK), also known as The Stoop.

The ‘Harlequins Rugby’ stated that in a first for the Gallagher Premiership, Harlequins supporters will benefit from this cutting-edge ticketing technology that allows them to digitally preview 360 views and sightlines, compare sections and show real-time availability of tickets. With incredible 3D life-like quality and pinpoint accuracy, fans will have the optimum opportunity to choose the seat that is right for them on their mobile or desktop.

The Harlequins is a professional rugby union club that plays in Premiership Rugby, the top level of English rugby union. Their home ground is the Twickenham Stoop, located in Twickenham, South-West London, UK. Founded in 1866 as Hampstead Football Club, they took the name Harlequins in 1870.

The Twickenham Stoop Stadium is a sports stadium located in South-West London, England (UK). The stadium is home to Harlequins rugby union team, who play in the Gallagher Premiership. The stadium has a capacity of 14,800 and is situated just across the road from the 82,000-capacity Twickenham Stadium in Twickenham, England.

Ticketmaster Entertainment, LLC. are the world’s largest ticket marketplace and a global ticketing products and services with headquarters in Los Angeles (US). In 2010 it merged with the Live Nation under the name Live Nation Entertainment.

Put in Laurie Dalrymple, Chief Executive, Harlequins, “We are constantly looking for ways to improve the experience of our supporters and Ticketmaster’s 3D Virtual Venue Technology is a brilliant initiative that we know our supporters will love. We have seen every single home Gallagher Premiership match sold out at The Stoop this season and have just suspended season ticket membership due to unprecedented demand – it is now important that we make coming to The Stadium and selecting the rights seats as easy as possible. This technology does just that”.

Added Chris Gratton, Chief Operating Officer (COO), Ticketmaster Sport, added, “Being able to bring an iconic stadium like The Stoop in 3D for fans to get a first-hand view of the seating options is fantastic. We’re delighted to be launching the first of our 3D rugby venues with Harlequins with many more to come as 3D sales from seat map become our standard option in line with club and fan expectations.”

From now on the 3D Virtual Venue will be fully integrated as part of the Harlequins ticketing journey.

Ticketmaster Sport is an established sports ticketing technology provider operating in 28 markets and partners with some of the major global brands and clubs in sport.