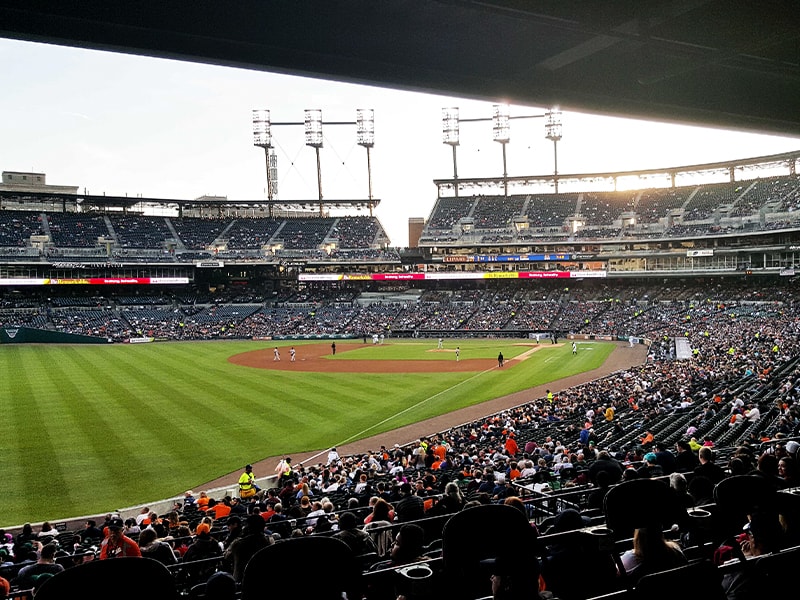 There will be some noticeable changes at Comerica Park in Detroit, Michigan (US) – home of the Major League Baseball (MLB) team Detroit Tigers – in the 2023 season.

‘Detroit Free Press’ stated that the Detroit Tigers, owned by Ilitch Holdings, plan to move in the center field wall at Comerica Park, the team announced on January 11th.

The 41,083-capacity Comerica Park is a baseball stadium located in Downtown Detroit, US. It has been the home of Major League Baseball’s (MLB’s) Detroit Tigers since 2000, when the team left Tiger Stadium.

The Detroit Tigers are an American professional baseball team based in Detroit. The Tigers compete in Major League Baseball (MLB) as a member of the American League Central division.

Said Scott Harris, the Tigers’ President of Baseball Operations, “We wanted to strike the right balance, where we were improving the offensive conditions for our hitters without fundamentally changing the profile of the park, and we felt like we could do that with these changes.”

Laser measurements of the outfield wall, as part of the research process, measured the old center field wall at 422 feet. (Also, the left field is being relabeled as 342 feet instead of 345 feet.) The new center field distance, 412 feet, still leaves Comerica Park as the second-deepest ballpark in baseball, behind only the 50,398-capacity Coors Field (415) in Denver, Colorado. The league-average distance in the center is 402 feet.

The entire outfield wall is going to be reconstructed with material and padding that enhances players’ safety.

The Tigers began discussing changes to the outfield dimensions during the 2021 season, and those conversations intensified when their head honcho and Chairman Christopher Ilitch hired Harris as the franchise’s President of Baseball Operations in September 2022, replacing former General Manager Al Avila.

After hiring Harris, Ilitch assembled a team of confidants to evaluate the situation.

Harris said on December 6th, 2022 at the Winter meetings in San Diego, “My general opinion on dimensions is that I would prefer to be on one side of the aisle or the other. I would prefer to have the opportunity to have some asymmetry in the environments that we’re playing. Whether we are on one side of the aisle as a pitcher’s park, or on the other side of the aisle as a hitter’s park, we have the opportunity to build a team a certain way to take advantage of the dimensions 81 times a year, because we are the only team that plays in our environment 81 times a year. I would prefer not to be right down the middle.”

The Comerica Park opened in the year 2000 with spacious dimensions that included a left-center field gap measured at 395 feet, which also featured a flagpole in play, a nod to the flagpole in center at the Tiger Stadium for nearly 90 seasons.

The 52,416-capacity Tiger Stadium (the stadium’s demolition was completed on September 21st, 2009, though the stadium’s actual playing field remains at the corner where the stadium stood), previously known as the Navin Field and Briggs Stadium, was a multipurpose stadium located in the Corktown neighborhood of Detroit (US). The stadium was nicknamed ‘The Corner’ for its location at the intersection of Michigan and Trumbull Avenues. It hosted the Detroit Tigers of Major League Baseball (MLB) from 1912 to 1999, as well as the Detroit Lions of the National Football League (NFL) from 1938 to 1974. The Tiger Stadium was declared a State of Michigan Historic Site in 1975 and has been listed on the National Register of Historic Places since 1989.

Slugging outfielder Juan González, who joined the Tigers in November 1999 in a trade from the Texas Rangers, was the first player to publicly complain about the spacious dimensions. In July 2000, the impending free agent said the Tigers would need to move in the left- and left-center-field fences if they wanted to re-sign him to a long-term contract. González signed elsewhere after the 2000 season, and the Tigers didn’t adjust their fences until 2003.

Before the start of the 2003 season, the Tigers built inner fences and shortened the distance in left-center to 370 feet. In 2005, the bullpens were moved from the right field to the empty space in the left field.

Following González’s comments, and despite the tweaks in 2003, many Tigers position players continued to complain. Sometimes, like in the case of Robbie Grossman (American professional baseball outfielder who is a free agent) last season, the dimensions created a mental challenge. The Comerica Park has been a talking point amongst both hitters and pitchers around the majors.

Left-handed pitcher Eduardo Rodríguez said in March 2022, before his first season with the Tigers, “I know playing at Comerica Park is going to be good for me, especially with the big ballpark. That’s the way I see it, and that’s the way I like it.”

Four of MLB’s five longest outs by distance since 2020 have occurred at the Comerica Park.

On September 14th, 2022, Riley Greene (baseball outfielder) crushed a 424-foot fly ball to center field for the third out in the bottom of the eighth inning. In 28 of 30 ballparks, Greene’s swing would have resulted in a go-ahead home run, but at the Comerica Park, it ended the eighth. The Tigers lost, 2-1 to the Houston Astros.

The fly ball sparked another round of conversations.

“It’s a game of inches,” said Greene, who hit five home runs in 93 games last season but would’ve launched at least 10 homers had he played all his games at 11 different ballparks in the United States.

Added Greene, “I should have hit it harder. It kind of comes down to that. I hit it good, but it’s just the park we play at. Sometimes it goes, sometimes it doesn’t. … If we go somewhere else, maybe it’s a home run, maybe it’s not. You never know.”

Remarked A.J. Hinch, Detroit Tigers Manager, “That topic is such a big topic, especially around this ballpark and the time that I’ve been in this organization. I haven’t really thought a lot about it. We play 81 games here. It’s the same every day. We can complain about it. We can pout about it. We can wonder what if. But it’s our park. We need to play to the dimensions.”

Grossman said in June 2022, less than two months before the Tigers traded the slumping outfielder to the Atlanta Braves, “Just the park. I tried to make some adjustments because of the park we play in, and it didn’t work for me, so I had to go back to who I was before.”

The Tigers’ best player on the current roster, two-time All-Star shortstop Javier Báez, is a homer-or-strikeout hitter. He had mashed at least 20 homers in five consecutive 162-game seasons before signing a six-year, $140 million contract with the Tigers in December 2021.

Observed Harris, “It was a priority for us to have a park that doesn’t play exactly like every other park because we feel like that affords us an opportunity to build a team that is better suited for our environment than our opponent 81 times a year. That’s an advantage we shouldn’t overlook, and I think these changes will help us achieve that.”

From 2018-2022, MLB players produced 5,685 batted balls projected to travel at least 420 feet. Only 23 of them turned into outs, and more than a third of those outs (eight), happened at the Comerica Park.

Moving forward, those rare outs should have a better chance to be home runs.

Concluded Harris, “We feel like too many balls that were barreled to the dead center field did not end up being extra-base hits. We feel like its very dispiriting for a hitter to barrel a ball to dead center and make a 419-foot out. If a few more of those end up being home runs or extra-base hits, we think it will have a positive impact on our hitters’ psyche and ultimately a positive impact on our team.”