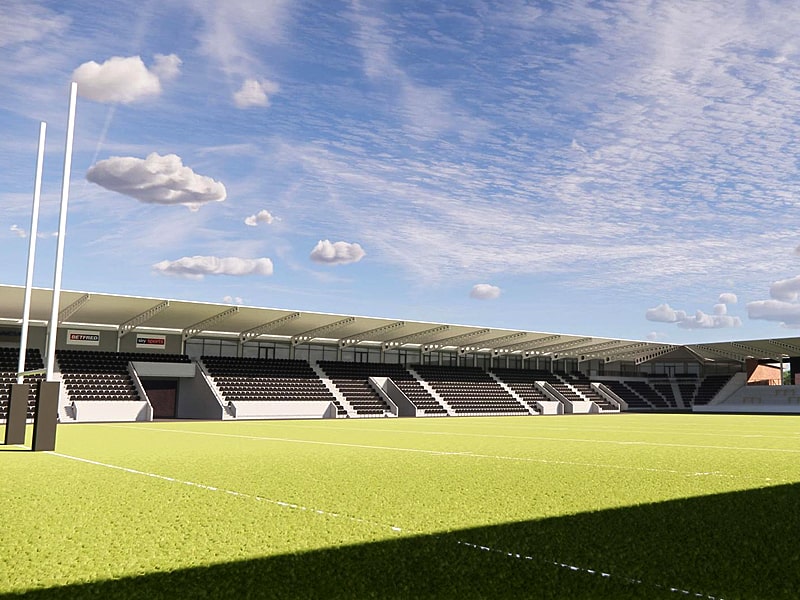 Subject to funding, the rugby league club Castleford Tigers (UK) want to remain at their existing site, rather than move to a new ground at Junction 32 of the M62 near Glasshoughton in Castleford (UK), which is owned by developers Highgrove Group.

The ‘Yorkshire Evening Post’ stated that Highgrove propose to submit a planning application over the Summer which would change usage of the approved Axiom retail and leisure development at Junction 32 to an employment site.

The 11,775-capacity Wheldon Road (known as the Mend-A-Hose Jungle for sponsorship purposes) is the home ground of Castleford Tigers Rugby league Club in Castleford, West Yorkshire, England (UK). It is on Wheldon Road, just outside Castleford town center. The record attendance of 25,449 was for a Challenge Cup match in 1935.

The ‘Yorkshire Evening Post’ further stated that rather than build a new stadium for Tigers at that location, Highgrove have agreed to provide funds towards major improvements to Wheldon Road.

Funds raised by the proposed new employment development would supplement Wakefield Council’s £2m grant to Castleford Tigers via their Rugby League Resilience Fund, announced at the end of last year.

The new and improved facilities are expected to generate extra income, putting Tigers on an equal footing with other top-flight clubs.

Stated Tigers’ Managing Director Mark Grattan, “There has long been a need for serious investment into the fabric of Wheldon Road. We spend large sums each year on maintenance, but this is really just applying a sticking plaster. What the stadium needs is a full revamp, befitting of our status as a Super League club.”

Added Grattan, “Following Wakefield Council’s announcement regarding their Rugby League Resilience Fund and Wakefield Trinity’s recent successful planning approval, we have been working closely with the Highgrove Group to secure the additional funds necessary to make Wheldon Road fit for the future.”

The Highgrove Group say the revised plans for the land would create around 1,800 jobs there and almost 600 elsewhere to support it, plus more than 650 jobs during construction.

A spokesperson for the Highgrove Group informed, “We are delighted to provide details of the plans we have developed with Castleford Tigers to support redevelopment of the Wheldon Road stadium should the Axiom site be successfully repurposed for employment development. The Highgrove Group is currently working on a planning application and intends to start community consultation in the coming months.”

Now known as the Jungle, Castleford have played at the Wheldon Road ground – which was initially home to the town’s football club – since the 1927-1928 seasons.

The stadium is recognized as one of the most atmospheric venues in Betfred Super League (the top-level of the British rugby league system), but is now badly dated and facilities for players, fans and sponsors have fallen well below the level of other top-flight stadiums.

The club have been planning to move to a new site throughout the Summer era, which began in 1996, but – as is the case with neighbors Wakefield Trinity – redeveloping the existing ground is now regarded as the most viable option.

« Previous News: Panthers’ practice facility plans in doldrums
» Next News: Its clash of the titans at ‘The G’