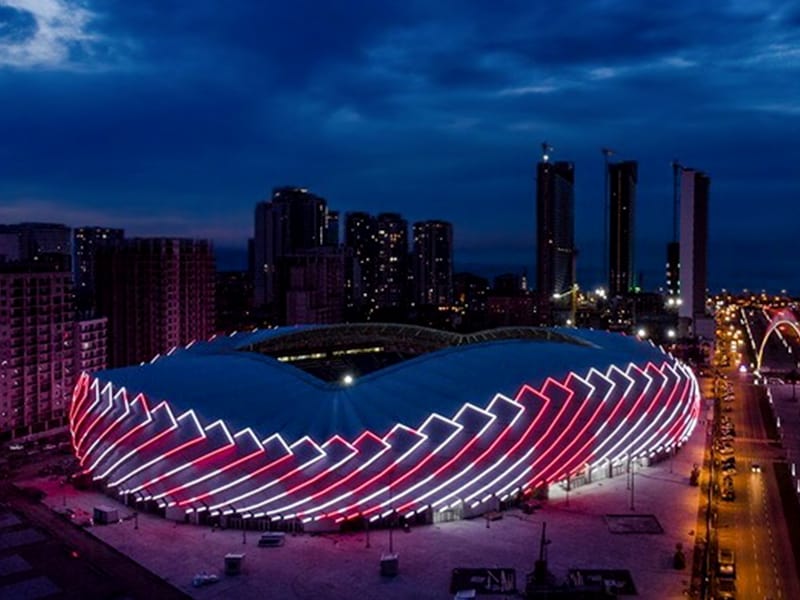 A stadium which can pack in 20,000 spectators has opened in the Black Sea resort town of Batumi in Georgia.

The facility meets the Category IV stadium guidelines laid down by the Union of European Football Associations (UEFA) – football’s governing body. This means it can be considered as a host venue for Champions League or Europa League club competition games, as well as matches during the European Championships national team tournament.

To hold the above events, an arena must boast a minimum seating capacity of 8,000, at least 100 seats for VIPs and at least 30 workspaces for members of the media.

A total of €37m ($44m) has been expended to build Batumi Stadium and sits on an eight-hectare site near a former car factory. Construction started in January 2018, with the venue designed by Turkish firm Bahadir Kul Architects. Around 500 workers were employed to build the stadium.

Though the stadium was set to go on stream in September, the same was postponed to October due to the global outbreak of COVID-19 – the biggest catastrophe to hit the world.

Prime Minister (PM) of Georgia Giorgi Gakharia said at the opening ceremony that Georgia is continuing with its major building projects despite the huge disruption caused by the pandemic.

FC Dinamo Batumi, the current league leader in the top-tier Erovnuli Liga, will play at the stadium, having previously hosted fixtures at the 6,000-capacity Chele Arena in Kobuleti, some 30 kilometers north of Batumi.

While football matches will be the main event for the stadium, it will also be able to host various cultural shows.

The stadium’s facade figures has been inspired by the Georgian folk dance ‘Khorumi , with a modern lighting system installed in it.

As the PM said at the inaugural ceremony, with the opening of the arena, the dream of many football fans have been realized.

“Despite the coronavirus pandemic, Georgia continues to build and open new stadiums, roads, provide gasification and much more. Although this stadium was supposed to open in a more pompous way, as the football players needed to exercise and practice for their future victories, to facilitate the same, it has been opened in a low-key manner now due to the pandemic,” stated Gakharia.

« Previous News: UEFA ‘no’ to games in Armenia, Azerbaijan
» Next News: UFC gets a new address – Abu Dhabi