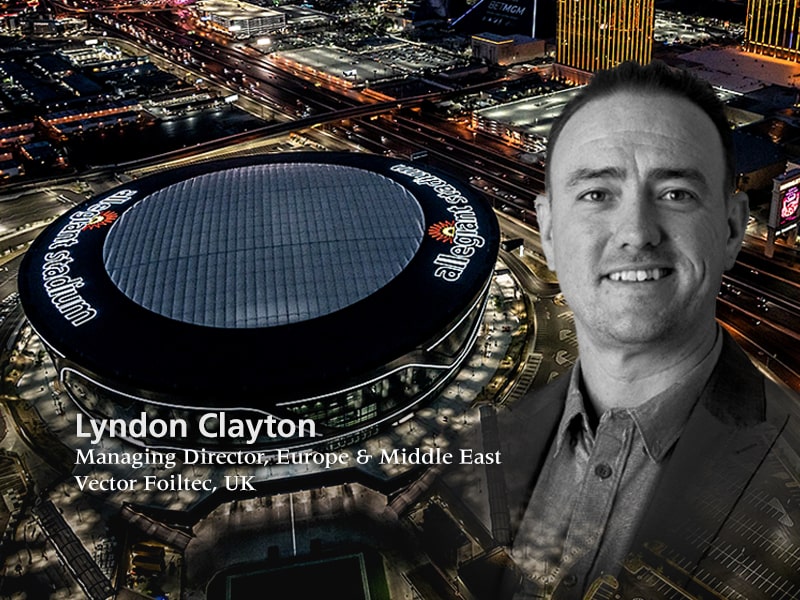 Lyndon Clayton in his present role as the Managing Director of Vector Foiltec is responsible for all projects and after-sales activities. As the inventors and market leaders in ethylene tetrafluoroethylene (ETFE) technology, the construction company’s projects range from large retail, complex infrastructure and magnificent stadia.

After 10 years with Vector Foiltec, Clayton has helped deliver projects across Europe and the Middle East.

Vector Foiltec is a business using transparent plastic (ETFE) cushions filled with air as an architectural cladding technology. This solution can be better than glass panels in applications such as roofs over aggressive environments where chemicals would attack a metal window frame, or where the transparent panels have to accommodate deformation due to changing thermal conditions.

In a nutshell (Vector Foiltec):

The first roof implementation was completed in 1982. Vector Foiltec are the inventor of the TexlonR ETFE system.

Three hundred employees worldwide, 80 of them being expert engineers.

Vector Foiltec has completed projects in over 100 countries.

In an exclusive chat with ‘Coliseum’, Lyndon Clayton, Managing Director, Europe & Middle East, Vector Foiltec, UK, present case studies of ETFE use in three major stadia – the drop-in-a-swoon Allegiant Stadium in Paradise, Nevada, US, the Johan Cruijff ArenA in Amsterdam, Netherlands, and the London Stadium in London (UK) – and tells how ETFE has come to the rescue when the company was facing challenges with the above stadia projects. He also elaborated on how ETFE has set the construction world alight with the potential it offers.

He shot off by informing that Vector Foiltec was formed in the year 1981 and presently it is involved in some 19 projects.

Ethylene tetrafluoroethylene (ETFE) is a fluorine-based plastic. It is designed to have high corrosion resistance and strength over a wide temperature range.

It is a transparent polymer used in architectural applications since 1982. But what can it do and how can it be used?

Explained Lyndon Clayton, “ETFE does not come from the chemical industry and when extruded into foils it can form different cushions and it can also provide roofing or cladding to varied projects.”

He added, “Vector Foiltec landed its first project in the early 80s and has 40 years of experience down the line. Vector Foiltec has supported many sports organizations around the world to deliver their visions for their world class venues using the unique performance provided by TexlonR ETFE.”

Clayton stated that Vector Foiltec has to its credit working with several sports organizations around the world, and have helped in solving the challenges these venues have faced – the ETFE way.

He informed, “We took up the Allegiant Stadium project when COVID-19 had the world in its fatal grip in the year 2020 and the United States was the most hard-hit country in the world. It was all about a fully enclosed roof on a new build venue – home of the Raiders in Las Vegas. The second project is the Johan Cruijff ArenA and the third one is the London Stadium where during transformation post-Olympic Games an external canopy was added for security purposes.

Going to Vegas, going across to the desert is challenging. During the construction stage, the experts were faced with the question as to whether the Allegiant Stadium should boast a retractable roof stadium and one of the team members stated, “I believed that would be a mistake because it is very expensive to build a retractable roof stadium and the truth is that you barely use it because in a retractable roof stadium there are always people in one half of the building that are in sun and the other half are in shade. And the people in the sun seeing the people in the shade complain. So, if you can solve the grass issue (another purpose of retractable roofs is to allow for growth of natural grass playing fields in environments where extreme hot and/or cold temperatures would otherwise make installation and maintenance of such a field cost-prohibitive). So, we decided to do a fixed domed stadium here in Las Vegas with an ETFE roof as the whole field tray slides out from underneath the stadium grass in the hot desert sun.”

The lanai doors are retractable doors that open on game and event days, if the weather allows, giving the 65,000-seat arena an open feel. Once the doors open, fans are able to catch a breathtaking glimpse of the Strip to the Northeast. A 55,000 square-foot peristyle club surround the 85-foot-tall memorial torch to honor Al Davis, the late owner of the Raiders.

Maintained Clayton, “The challenge was the fully enclosed roof which meant using very large spans. A very hot desert environment and the temperature has to be controlled from inside and the walls will have to maintain as much natural light as possible.”

He added, “32,515 m2 of ETFE is made up of 107 cushions and the reason it is so effective is that it is so lightweight and the entire system plus ETFE cushions relies on aluminum extrusions accessories. As a result, the structural ETFE is very lightweight.”

Clayton pointed out that control of the internal environment of the stadium was another challenge. Since ETFE has transparent polymer it helps to control spectrums of the light that come in using different layers of foils.

The entire team came out with a correct solution – the different layers of foils helped create a great environment inside the Allegiant Stadium and everybody was spared from the scorching desert heat.

The lightweight aspect of the roof structure and the cushion configuration combined to create this vast roof enclosing the Raider’s new home.

The 55,500-capacity Johan Cruijff ArenA is the main stadium of the Dutch capital City of Amsterdam and the home stadium of the Dutch professional football club AFC Ajax since its opening. Built from 1993 to 1996 at a cost equivalent to €140 million, it is the largest stadium in the country.

Clayton informed that the first phase of a façade extension was completed using ETFE to expand the internal space and update the external appearance of the stadium – “In the build-up to the Euro 2020, fairly well-disrupted due to the pandemic, the anticipation was that a number of matches will be held here.

He commented, “With mixed-use venues being the present flavor, the Johan Cruijff ArenA was also transformed to cater to non-matchday experiences. So, increasing the space within the stadium itself and improving the fan experience.”

He continued, “The solution we came up with was again a lightweight structure which could hang from an existing structure and quite important was maintaining the existing character because the stadium was 20 years old and at that point it was already part of the Amsterdam skyline and this allowed the existing stadium to be updated and increased.”

The 60,000-capacity London Stadium is a multipurpose outdoor stadium at the Queen Elizabeth Olympic Park in the Stratford district of London. It is located in the Lower Lea Valley, six miles East of Central London (UK).

The stadium for the 2012 London Olympic Games underwent a transformation to fulfill its legacy obligations and became the home for the Premier League team West Ham United F.C.

An ETFE Halo canopy to the perimeter of the stadium extended the space for fans, concession areas and security requirements.

Following the successful 2012 London Olympic Games, the centerpiece of the park, the stadium had to be transformed to its legacy state.

Put in Clayton, “So, when the London Stadium was to become a World Cup venue, we were required to identify additional dry space around the stadium for concessions, security testing system and one of the issues with that was that the canopy had to be coordinated with the raking columns of the original built.”

The solution: The Halo

He maintained, “The original architectural intention was to have these columns penetrate through the cushions and it was a very complicated process. The key was to transform uniform tension across the surface. So, we got a number of mock-ups.”

How was ETFE able to solve these varied challenges?

ETFE facilitates savings in material transport, a concrete structure supporting it. It can control light and shading and ETFE does not become brittle. It is strong and very flexible.

ETFE scores well on the eco-friendly front as well. Being 100 percent recyclable and requiring minimal energy for transportation and installation means that it makes a significant contribution to the move towards Green construction and sustainability.

ETFE to the rescue

Lyndon Clayton summed up by asserting, “In summary, all the above three stadia projects benefited from the innovative, sustainable and lightweight properties of ETFE whether it is an enclosed roof, façade or external canopy.”

ETFE foil is indeed taking today’s design industry by storm. The advantages of its extraordinary tear resistance, long life and transparency to ultra-violet light offset the higher initial costs and it is rapidly bursting into the consciousness of architects and designers worldwide.

Undoubtedly, going by the qualities of this building material, the Vector Foiltec team swears by the ETFE name.