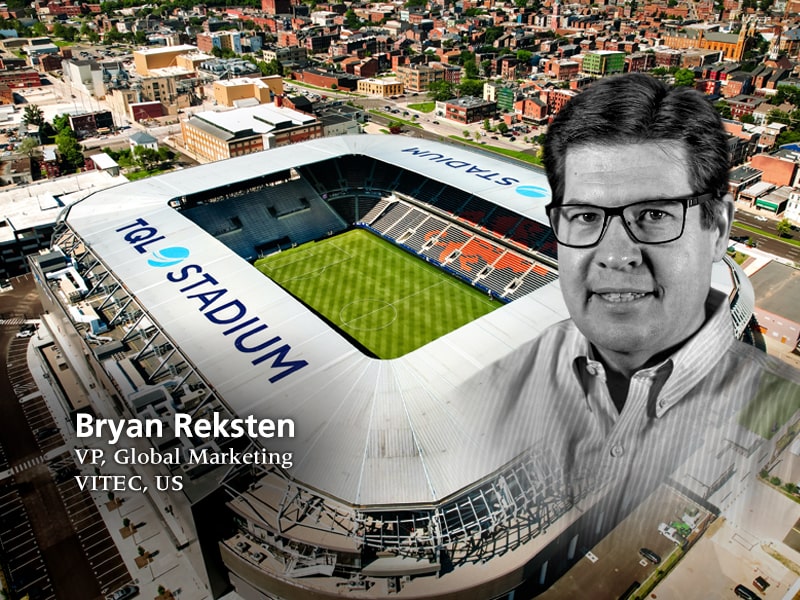 A spontaneous speaker, words come with ease to Bryan Reksten and he has all information on his fingertips. Presently in the role of Vice-President, Global Marketing, VITEC, US, Reksten is responsible for the branding and go-to-market strategy of VITEC’s solutions across multiple market segments including Sports Venues, Enterprise, Broadcast, and Hospitality.

Prior to joining VITEC in 2019, Reksten led Technicolor’s Connected Home Marketing team that supplied cable, satellite and Internet Protocol Television (IPTV) devices for customers worldwide including Charter, Rogers, Liberty Global, and DirecTV. He works out of VITEC’s US headquarters located in Atlanta, Georgia.

In an exclusive and engaging interaction with ‘Coliseum’, Bryan Reksten revealed what challenges the company faced vis-à-vis their recent installation at the TQL Stadium for the FC Cincinnati soccer team’s IPTV and Digital Signage system that included a unique video wall sponsorship. The original design plan did not meet expectations and required an innovative approach by VITEC and team spirit and team work helped them taste success.

Bryan Reksten started off by informing that VITEC set up shop in the year 1988 – “We are a streaming video technology company – a global company based in Paris and I work in the Atlanta office. A video company, we started out doing MPEG video and then we eventually moved to IPTV within enterprises.”

He further informed, “The above customers use our IPTV. And eventually, as stadiums started moving towards IPTV, they came to us looking for IPTV solutions.”

A file with the .mpeg (or .mpg) file extension is an MPEG video file format, which is a popular format for movies that are distributed on the Internet. They use a specific type of compression that makes streaming and downloading much quicker than other popular video formats.

As Reksten explained, “We started deploying in stadiums in 2015. We started with an NFL stadium, primarily just IPTV and then we started adding to the signage. Gradually, a lot of teams came to us and said we want digital signage as well.”

The 26,000-capacity TQL Stadium, called the West End Stadium during construction, is a soccer-specific stadium in Cincinnati, Ohio, US. It is the home of FC Cincinnati, a Major League Soccer (MLS) team that had been temporarily playing at Nippert Stadium. The TQL Stadium opened its doors on May 16th, 2021.

The FC Cincinnati is an American professional soccer club based in Cincinnati, US. The club plays in the Eastern Conference of Major League Soccer (MLS). The team succeeded the lower-division team of the same name and was announced on May 29th, 2018, when MLS awarded an expansion franchise to Cincinnati. The team began MLS play on March 2nd, 2019.

Added Reksten, “We recently did an installation at the TQL Stadium. Major League Soccer is trying to grow in the United States for which they are trying to build these soccer stadiums. We also did an installation for another venue in Minnesota, US, the same size as the TQL Stadium. And we had a combination of suites and VIP suites. One of the things that the venue really wanted was a centrally controlled IPTV system. So, IPTV and digital signage – all centrally controlled so that they could change and make adjustments across their entire facility and they also really wanted to drive sponsorship revenue.”

He further narrated, “And one of the sponsors was Coors and they were about to launch a unique video wall application. So, instead of just having a video wall, they were going to put them on beverage coolers that were going to be inside the stadium. We faced a lot of challenges while doing this video wall.”

He stated how during the installation work, one of the VITEC technicians realized that it is not going to work.

The VITEC team immediately got down to working on a solution and they worked onsite with the IT team stationed at the stadium “And we needed to figure out what we can quickly do to make this work. There was no passing-the-buck and everybody put in their best efforts with their level of expertise to fix things up and make the installation work.”

VITEC Video Wall Canvas support any wall design including large frame ‘bezel’ – “And then the last thing was we had to change the content – we had to get the video content, we had to get something that was going to work better but within our video wall processor we have a canvas that allowed us to account for those large bezels. So, the screen didn’t become a problem and we were actually able to use that content.”

He pointed out that the adage – ‘Content is King’ – rings true – “We can put up a lot of tech bells and whistles in a venue but what really matters is the right screen content.”

The four center screens at the TQL Stadium are being driven by a video wall processor. The two outside screens are standard digital signage displays running on the video wall processor – “We adjusted the video, we were able to make the adjustments to make this work. The thing about this installation is there were about three of these screens around the arena and within the arena it sits with line of six from the field. So, when you are actually sitting in your seats, you can see this video wall. So, they also act as an advertisement and holds very strong sponsorship value. It kind of creates this compelling new different way of displaying the content, sponsoring the content and it is something that has gone down very well with the fans.”

He summed up by stating, “IPTV and digital signage is really a great way to engage fans and in a post-pandemic experience, people are so used to staying cooped up inside their homes that it requires great effort to pull them out of the couch and bring them to the arena. So, the screens that are around in a stadium are going to play a key role while matches/events are held in a facility and people are going to use that screens that provides new sponsorship opportunities, new revenue opportunities and new ways to communicate with your fans. And within this system that is deployed, it is very important that it is scalable.”

For sports and entertainment venues, upgrading to an IPTV network is the wisest thing to do today and makes all the sense in the world. IPTV provides a unique visual and auditory experience that supports and enhances the gameplay. And it delivers a one-of-a-kind fan experience and help drive revenue opportunities.