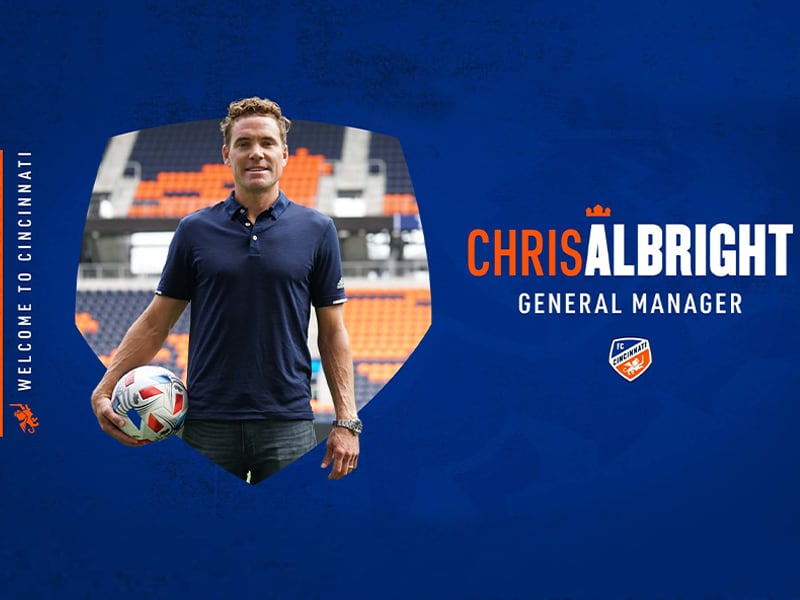 The Major League Soccer (MLS) team FC Cincinnati (US) announced on October 4th that Chris Albright has been hired as the new General Manager of the club, effective immediately. Albright brings over two decades of American soccer experience to FC Cincinnati, as a player and as Technical Director. He played 15 seasons in Major League Soccer, winning three MLS Cup titles.

The ‘FC Cincinnati’ stated that since his retirement from playing after the 2013 season, he has served as Technical Director of the MLS team Philadelphia Union. During his time, the Union have won the Supporters’ Shield (2020), earned four playoff appearances and finished runners up in the Lamar Hunt U.S. Open Cup three times.

Football Club Cincinnati, commonly known as FC Cincinnati, is an American professional soccer club based in Cincinnati (US). The club plays in the Eastern Conference of Major League Soccer (MLS). The team succeeded the lower-division team of the same name and was announced on May 29th, 2018, when MLS awarded an expansion franchise to Cincinnati. The team began MLS play on March 2nd, 2019.

The TQL Stadium, called West End Stadium during construction, is a soccer-specific stadium in Cincinnati, Ohio. It is the home of FC Cincinnati, a Major League Soccer (MLS) team that had been temporarily playing at Nippert Stadium. A groundbreaking ceremony was held on December 18th, 2018, and the stadium officially opened on May 16th, 2021. The stadium cost around $250 million to build and holds 26,000 spectators.

Said FC Cincinnati President Jeff Berding, “Our search for our next General Manager was extensive. Our new General Manager was going to be someone who knew what was required to win in Major League Soccer, experience that was non-negotiable. Delivering on that requirement, we are delighted to have found the best person for the job.”

Said Managing Owner and CEO Carl H. Lindner III, “Chris’ experience in Major League Soccer and his track record of success are impressive. His ambitious, energetic character is emblematic of the type of leader we sought to bring in. We are thrilled to have him lead our soccer organization, and we are confident that he will fulfill our goals, and help make Cincinnati a championship City.”

Maintained Albright, “It’s an honor to be the General Manager of FC Cincinnati. This is a club with incredible supporters, top-of-the-league facilities and resources, and a hunger for success. I would like to thank Carl [H. Lindner III], Meg Whitman and the ownership, as well as Jeff and everyone who has trusted me to lead this club to achieve the goals we have set. I am committed to bringing all of my knowledge and experience to the table to make FC Cincinnati a championship club. I look forward to meeting the team, the staff and all of the fans, and I can’t wait to get started.”

The Philadelphia native played two seasons of college soccer at the University of Virginia. After leading the team with 20 goals and adding 23 more assists, Albright left University of Virginia after the 1999 season to join Project-40, joining MLS after being courted by clubs overseas as well. He was assigned to the Washington-based soccer team D.C. United, and in his first season the club hosted the 1999 MLS Cup.

Albright won two more MLS Cups in 2002 and in 2005 with the Los Angeles Galaxy. His performance during the 2005 Cup-winning campaign earned him MLS Best XI honors and the second of three consecutive MLS All-Star team selections. He ended his 15-year MLS career having played in 253 matches, tallying 12 goals and 25 assists with five MLS clubs.

In addition to his domestic success, Albright earned 22 caps with the United States Men’s National team, including a selection as a member of the 2000 U.S. Olympic Team in Sydney and the 2006 FIFA World Cup™ squad in Germany. Albright scored two goals for the US in the 2000 Olympic run to the bronze medal game, the best finish in men’s Olympic history.

After he retired from playing with the Union in 2013, he was appointed Technical Director in January 2014. In that time, the Union had not only seen domestic success, winning the 2020 Supporters’ Shield and reaching the U.S. Open Cup Final three times, but also international recognition for his development of the Union Academy.

Under Albright, the Union Academy has developed into one of the best in the world at cultivating talent and recently has produced young stars who have garnered massive international transfers. Academy products Zack Steffen earned a move to the Premier League team Manchester City F.C. (UK), and Mark McKenzie and Brenden Aaronson earned massive European moves as well.