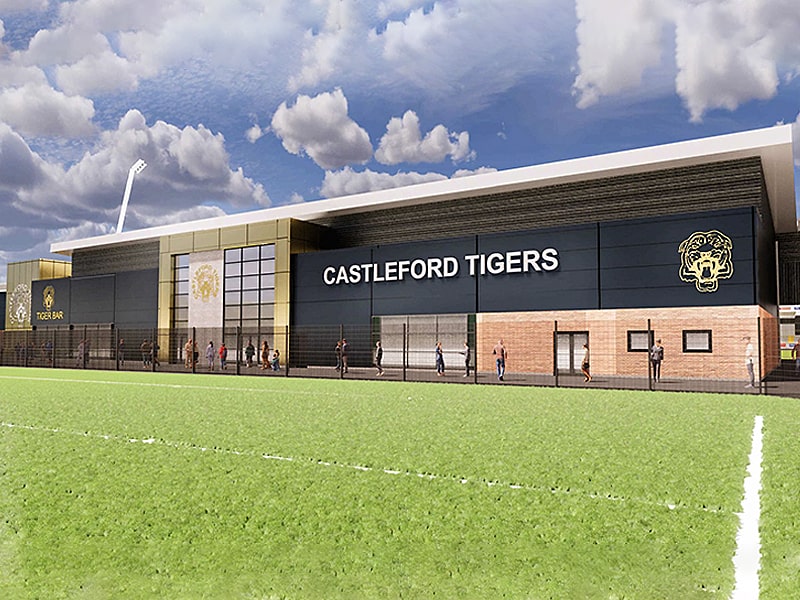 ‘Castleford Tigers’ stated that the Castleford Tigers and the Highgrove Group have confirmed that planning applications have been submitted to the Wakefield Council for a major upgrade to their home ground – the Wheldon Road Stadium in Castleford, England (UK) – and a significant new employment development on the Axiom site, at Junction 32 on the M62.

The 11,775-capacity Wheldon Road (known as the Mend-A-Hose Jungle for sponsorship purposes) is the home ground of the Castleford Tigers Rugby league Club in Castleford, West Yorkshire, England (UK). It is on Wheldon Road, just outside the Castleford town center. The record attendance of 25,449 was for a Challenge Cup match in 1935.

Axiom is located in the heart of Yorkshire, the United Kingdom’s largest county, with direct access from Junction 32 of the M62.

‘Castleford Tigers’ further stated that if planning is approved, the circa £200 million Axiom Yorkshire proposals will provide £12.2 million of funding towards major upgrades at Wheldon Road and £15 million of highways improvements to the Junction 32 roundabout, and new employment, logistics and manufacturing floorspace, creating jobs for the local people. Once fully developed, the Axiom site will deliver around 1,830 permanent full-time jobs in Castleford, with a further 365 jobs created within the Wakefield Council area.

Approximately 1,500 construction jobs will be created per year during the works at both Wheldon Road and the Axiom employment site. It is anticipated that the Axiom proposals will generate around £142 million of local economic activity, once fully operational.

Funds raised by the proposed new Axiom employment development would supplement the Wakefield Council’s £2 million grant to Castleford Tigers via their Rugby League Resilience Fund. This mirrors the mechanism of the recent planning approval at the Newmarket Lane which is providing funds to redevelop Wakefield Trinity’s (rugby league club) home stadium – the 9,333-capacity Belle Vue ground in Wakefield, England.

Proposed improvements to the Wheldon Road Stadium will mean that the club can meet Super League standards. A new all-seater main stand will be constructed, providing modern sporting facilities for players and officials, along with a banqueting suite and corporate hospitality function rooms. Refurbishment of Wheldon Road, Princess Street and Railway End stands are also proposed, along with the provision of a new floodlit 4G training pitch.

Fourth Generation (4G) surfaces consist of one element: Synthetic turf. These surfaces are still in the early stage of development and are designed to eliminate the requirement for any infill products, whilst still meeting all the performance and testing requirements required by the sporting governing bodies.

Upgraded facilities at Wheldon Road will deliver major improvements to be enjoyed by all fans, including new catering facilities and toilets. Importantly, improved accessibility and much enhanced viewing areas will transform the matchday experience for fans with disabilities.

The separate planning application for the Axiom site at Junction 32 proposes development of up to 141,085 sq. m of employment floorspace, across approximately 13 units of varying sizes. Much work has gone into devising an appropriate landscaping and planting scheme intended to minimize the visual impacts of the development. Planted landscape buffers will be created on three boundaries of the development, and introduced at an early stage to screen construction activity from the residential areas.

In total, 22 acres of open space and landscaping will be created, which will see some 40,000 new trees planted. The site will benefit from around three miles of new public paths and cycle routes, opening the site up for community use and linking residential areas to the East of the site with Xscape, the Junction 32 Outlet Centre and the Glasshoughton Railway Station in Castleford, England.

Said Mark Grattan, Castleford Tigers Rugby League Football Club (RLFC) Managing Director, “We are delighted that the planning applications for both Axiom and the Wheldon Road improvements have now been submitted. This is a really important moment for the club and the town more widely. If both planning applications are approved, the money raised will secure the future of Castleford Tigers at Wheldon Road for a generation, at an important time for the rugby league, with Super League considering a move to a grading system. The quality of our home is critical to our future sporting success, and these plans provide an upgrade to player training and medical facilities. Improving the matchday experience for all fans is of course our priority, but the significantly improved banqueting and hospitality facilities enable us to increase matchday revenue and generate income throughout the week, which in turn benefits the club’s finances.”

A spokesperson for Axiom Yorkshire, owners of the Junction 32 site, stated, “Following five months of community consultation, we have now submitted both planning applications to the Wakefield Council. The response from the community has been very supportive, we believe because people recognize the huge potential benefits of these two important regeneration proposals for the area. On top of the much-needed improvements for the Castleford Tigers stadium, if approved, the Axiom proposals will deliver around 2,200 jobs, generating wide-ranging socio-economic benefits for the local area. We had particularly useful feedback from residents living near the Axiom site and our design team has taken great care to work through these comments to ensure that the employment development is of the highest quality and offers the most benefits to the whole community. Major landscaping and planting of around 40,000 trees will take place to ensure that the Axiom proposals are well-screened and set within a lush and green environment.”

The spokesperson added, “We would like to thank everybody who has participated in the public consultation, and taken the time to provide feedback on the plans.”

The Axiom site currently has planning approval for around 70,000 sq. m of retail, leisure and stadium space, which is unlikely to be built out in the short to medium term. If plans are approved, the new employment development would replace this approved stadium, retail and leisure development at Junction 32.