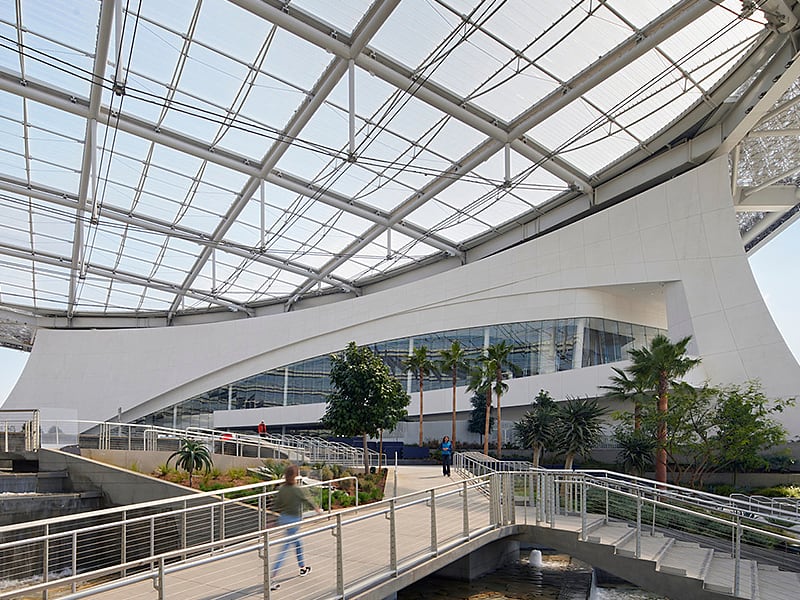 When architecture firm HKS helped develop the masterplan for Hollywood Park in 2014, a key piece of the Inglewood, California (US) development – its 6,000-seat performance venue – didn’t yet have a unique design identity.

‘HKS’ stated that soon to be dubbed the YouTube Theater, the project would complete an ambitious vision shared by HKS and E. Stanley Kroenke, Owner and Chairman of the National Football League (NFL) team Los Angeles Rams, for a 300-acre world-class sports and entertainment destination. Along with the 70,000-capacity SoFi Stadium and the 15,000-capacity American Airlines Plaza, the YouTube Theater was set to transform Hollywood Park into the newest major events center in Southern California, US.

The YouTube Theater is a 6,000-seat music and theater venue in Inglewood, California, US. Located under the same structure that houses the SoFi Stadium, it is part of the Hollywood Park entertainment complex, a master planned neighborhood in development on the site of the former Hollywood Park Racetrack.

He added that those key elements were intended to uniquely position the theater as a new, state-of-the-art home for all types of live entertainment.

‘HKS’ further stated that equipped with the knowledge and experience they gained designing the Hollywood Park and the SoFi Stadium, a collaborative team of HKS designers began work on the YouTube Theater in 2017.

As the stadium rose, designers and consultants had to figure out how to create a fully enclosed theater underneath the shared massive roof canopy. They were “catching up” to the much larger stadium project’s construction throughout the process, according to HKS Senior Project Architect Michelle Stevenson.

Said Stevenson, a Project Architect for both SoFi Stadium and the YouTube Theater, “We were building a ship in a bottle.”

Navigating structural complexities, designers worked with partners at Walter P. Moore who engineered the wave-like canopy and its column system to respond to seismic shifts. Stevenson, a Los Angeles-area native familiar with rigorous local building codes, said architects and engineers designed the theater’s floor plates to engage with columns so that when the roof moves, the building moves with it. The SoFi Stadium has similar seismic-resistant flexibility.

Instead of seeing the canopy’s intricacies as limitations, the design team drew inspiration from its distinct forms. For YouTube Theater’s exterior, they developed a sweeping convex glass façade that seamlessly integrates with the structure overhead.

Though it is a stunning architectural feature unto itself, the façade also creates a backdrop for events at the stadium and public plaza. In addition to being a completely standalone venue, the theater can support events at the stadium or plaza with facilities including restrooms, concessions and balconies.

The same week Super Bowl LVI (an American football game played to determine the champion of the National Football League for the 2021 season) took place at the SoFi Stadium in February this year, for example, the YouTube Theater was the host venue for NFL Honors, an annual awards ceremony celebrating the year’s biggest moments in football.

NFL Honors showcased how integrated sports and performing venues can really work together – and it was just one of YouTube Theater’s showstopping inaugural year events, which have also included concerts by Grammy Award winning artistes such as the American rapper Pitbull, the American singer-songwriter H.E.R. and the American indie folk band Bon Iver.

More Than Meets the Eye

To a first-time visitor peering inside the building’s doors and windows from the plaza, the YouTube Theater may not appear to house a state-of-the-art performing arts facility for the world’s best musical acts.

But just like a ship in a bottle, a close look through the glass reveals something truly special.

Visible from outside, a rounded structure painted in a deep blue hue encases the theater’s stage and seating bowl. During the evenings, the building looks like a lantern lit from within, complete with a shining jewel at the core.

Added Stevenson, “The blue drum is really the heart and soul of YouTube Theater.”

The drum promotes organic flows of foot traffic throughout the venue. As patrons enter the building from multiple sides, they can freely and easily circulate around it to socialize and visit bars on all three levels. When show time draws near, they enter the auditorium through the drum’s blue walls and make way to their seats.

Designing for the Ultimate Performance Experience

The structural contours of SoFi Stadium’s canopy, the YouTube Theater’s façade and blue drum all inspired the HKS team to imagine a theater with interior architecture that would offer exceptional experiences for performers and audience members.

Stated Stevenson, “We wanted to make sure that it was not just a black box, but something that really pushes innovation.”

The Theater’s 6,100 square-foot stage features a sky deck and catwalk structure with flexible rigging systems. Artistes’ teams can affix specialty equipment safely and quickly, smoothening operations for the Theater staff and crews constrained by demanding tour schedules. These elements make the YouTube Theater particularly attractive to entertainers who want to perform in a place that allows them to experiment with audio visual design, according to Stevenson.

Every single detail inside the Theater’s 6,000-seat auditorium was expertly crafted to provide the best possible sonic experience.

Working closely with the acoustic and technical consultants at Idibri (team of technology designers, theater consultants and acousticians who craft forward-thinking spaces), the design team incorporated a cutting-edge sound system with an elaborate bass trap that limits noise transmission outside the building and the most technologically advanced production equipment on the market, including speakers from L-Acoustics (French manufacturer of loudspeakers).

Informed Amanda Trimble, HKS Project Interior Designer, “We were very sensitive to the venue and its primary function as a performance space. We wanted every design decision to enhance acoustical performance.”

The seating bowl is shaped like a fan so the sound spreads through all sections evenly, and nearly every surface is covered in fabric including acoustic wall panels, rigging structures and seating. Each of these design measures limits unwanted feedback and distracting sound patterns.

Gannon said that the venue’s acoustics, size and premium finishings all support a wide variety of live entertainment events – “From esports and stand-up comedy specials to intimate concerts, the YouTube Theater is a place entertainers want to perform and fans want to watch their favorite acts.”

Contemporary Luxury for all Patrons

In addition to working on finishes in the larger performance and audience areas, Trimble led the interior design of bars, club spaces and private rooms throughout the venue. She said that as the project progressed, the Hollywood Park team expressed a desire for interior design that could provide a luxury environment for everyone who entered the YouTube Theater, ranging from a typical event ticket holder to high-caliber celebrities.

Added Trimble, “The venue needed softness and finesse, so we brought artistry into some of the interior spaces.”

In every space at the YouTube Theater, great levels of detail and coordination went into the design.

Continued Stevenson, “Everything was thought of as a cohesive piece with a refined palette,” noting that the architecture and interior design teams worked very closely together and consulted with the YouTube Theater’s operations staff every step of the way.

A 3,500 square-foot club section with a dedicated lounge and 150 premium seats, and an exclusive industry room for private gatherings with talent, artiste management and invited VIP guests, who are among the most luxe spaces at the YouTube Theater. But the space that perhaps best exemplifies the team’s cohesive design and their drive to create an exciting atmosphere for each patron regardless of the cost of their ticket – a favorite spot of Stevenson and Trimble – is the balcony bar.

Located on the venue’s top floor, the area features a 360-degree bar, a three-story chandelier with programable lights and an outdoor balcony with stunning views across Hollywood Park’s six-acre lake.

Stated Stevenson, “The balcony bar has a wow factor. You can see unexpected views of Los Angeles and sunsets. It’s also typically open to all people attending events – it’s not tucked away.”

Flexibility and versatility are essential elements of YouTube Theater’s design. The balcony bar, for example, can be rented for gatherings like corporate happy hours or networking events. The auditorium is easily sectioned off with curtains to seat 3,400, 4,400 or 6,000 patrons, which helps limit the visibility of empty seats during performances intended for smaller audience sizes.

Put in Trimble, “Flexibility comes from the owner and operator and their vision for what they could see happen here. As designers, we facilitate that vision. More and more, we’re tapping into revenue potential.”

In fact, potential is one of the big ideas behind YouTube Theater, a venue conceived to fill an existing void in the local entertainment market.

Stevenson further added, “There’s no project of this size in this area. It fits a niche market in Los Angeles,” noting that other performing arts venues nearby are either large arenas or small club-like establishments.

The YouTube Theater balances the best of both worlds, offering an up-close and personal entertainment experience for eventgoers as well as an appealing location for artistes and event producers that desire a fully operational, technologically advanced venue.

Commented Christy Castillo Butcher, Senior Vice-President Programing and Booking for SoFi Stadium and Hollywood Park, “The YouTube Theater is garnering great buzz among artistes, the music industry and patrons. The sleek design allows for incredible sightlines creating an intimate feel unique to a venue of this size. The comfortable seating and premium areas complement the breathtaking architecture, adding to the overall experience.”

When she attended her first concert at the YouTube Theater last year, Stevenson sat far away from the stage to take in as many sights and sounds she could. She said that watching the audience react to a performance in a space she helped create was extremely memorable.

She said, “I think people were blown away. They got an experience that was over the top.”

As the YouTube Theater welcomes more events and people from around the world, the HKS designers are looking forward to seeing how a project that started out like building a ship in a bottle transforms into an anchor for the performing arts.

Concluded Stevenson, “As a native of Los Angeles, it’s amazing to know that this project will be part of all the fantastic entertainment venues here. But it’s not just a Theater, it’s a destination.”