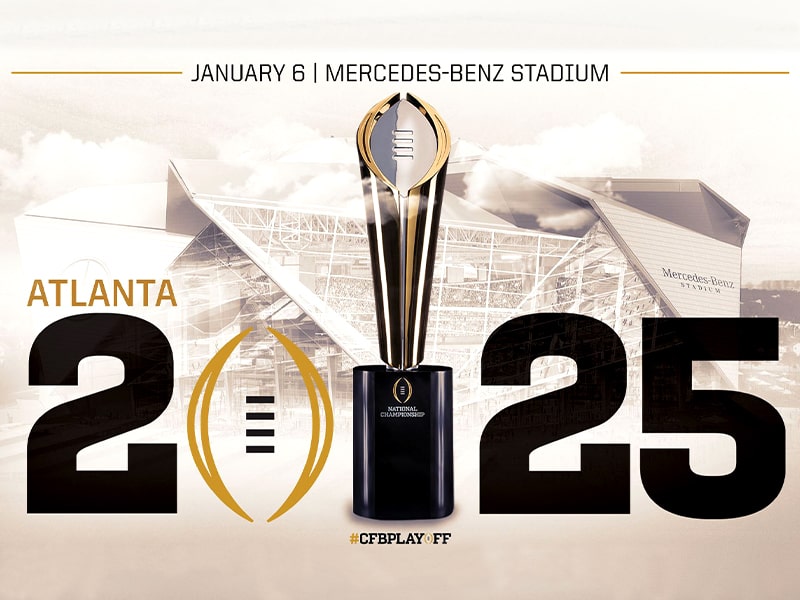 Bill Hancock, Executive Director of the College Football Playoff (CFP), announced recently that the CFP’s Management Committee has selected Atlanta (US) to host the 2025 CFP National Championship at the Mercedes-Benz Stadium in Atlanta, Georgia. Atlanta will become the first City to host the CFP title game for a second time.

The College Football Playoff is an annual postseason knockout invitational tournament to determine a national champion for the National Collegiate Athletic Association (NCAA) Division I Football Bowl Subdivision, the highest level of college football competition in the United States.

The College Football Playoff matches the No. 1 ranked team vs. No. 4, and No. 2 vs. No. 3 in semifinal games that rotate annually among six bowl games – the Goodyear Cotton Bowl, Vrbo Fiesta Bowl, Chick-fil-A Peach Bowl, Capital One Orange Bowl, Allstate Sugar Bowl, and Rose Bowl Game.

This season’s Playoff Semifinals will take place on December 31st, 2022 at the Vrbo Fiesta Bowl and Chick-fil-A Peach Bowl. The Los Angeles region will host the College Football Playoff National Championship on January 9th, 2023, at the 70,000-capacity SoFi Stadium in Inglewood, California.

The Fiesta Bowl is an American college football bowl game played annually in the Phoenix metropolitan area. From its beginning in 1971 until 2006, the game was hosted at the 53,599-capacity Sun Devil Football Stadium in Tempe, Arizona. Since 2007, the game has been played at the 63,400-capacity State Farm Stadium in Glendale, Arizona.

The Peach Bowl is an annual college football bowl game played in Atlanta, Georgia since December 1968. Since 1997, it has been sponsored by Chick-fil-A and is officially known as the Chick-fil-A Peach Bowl. From 2006 to 2013, it was officially referred to as simply the Chick-fil-A Bowl. It is played at the Mercedes-Benz Stadium.

The 71,000-capacity Mercedes-Benz Stadium is a multipurpose stadium located in Atlanta, Georgia, United States. Opened in August 2017 as a replacement for the Georgia Dome, it serves as the home stadium of the Atlanta Falcons of the National Football League (NFL) and Atlanta United FC of Major League Soccer (MLS).

‘College Football Playoff’ quoted Hancock as stating, “We are excited to return the College Football Playoff National Championship to Atlanta. When the playoff was created, the goal was to move the national championship game to 10 different communities in the first 10 years of the playoff. After visiting 10 different communities during our first 10 years of existence, we accomplished our goal of sharing this celebration of college football with the entire country.”

‘College Football Playoff’ further quoted Hancock as stating, “Bringing the game back to Atlanta was a simple decision when we looked at everything. One of our greatest title games took place in Atlanta in 2018, and the City could not have been a better host. A state-of-the-art stadium, a walkable downtown with venues to host all the activities surrounding the national championship weekend and great people made Atlanta an obvious choice to be the first City to host a second title game.”