Acrisure Arena to ‘steel’ the show 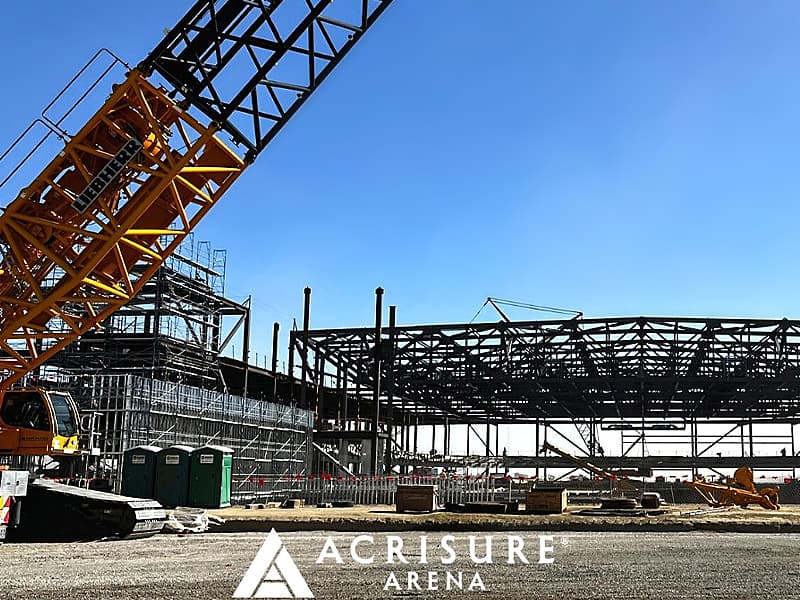 Acrisure Arena (California, US), the new multipurpose sports and entertainment venue currently in the works for the Coachella Valley, has officially reported that the last major piece of structural steel is now in place.

The ‘CELEBRITY ACCESS’ stated that to mark the occasion, the arena hosted a ‘topping out’ ceremony on February 16th with construction workers placing the final steel beam – one of more than 5,100 steel pieces totaling 2,737 tons of structural steel making up the arena – in place at the top of the building.

Acrisure Arena (originally named Coachella Valley Arena in planning) is a multipurpose 10,000-seat indoor arena under construction in Thousand Palms, California, a City in Coachella Valley (US). The arena broke ground on June 2nd, 2021, on 43.35 acres of unincorporated land near Palm Desert, between Interstate 10 and the Classic Club golf course. The naming rights to the arena are expected to be completed in late 2022 and it will be the home arena for the Coachella Valley Firebirds of the American Hockey League.

The naming rights of the arena have been lent by the financial technology company Acrisure, who paid an undisclosed sum for 10 years to it.

The Coachella Valley is an arid rift valley in the Colorado Desert of Southern California’s Riverside County. In some places, it is also referred to as Greater Palm Springs, due to the greater prominence of that City to the others in the area and its popularity in the public mind.

Said John Bolton, General Manager of Acrisure Arena and SVP Oak View Group Facilities, “This is a very special milestone for Acrisure Arena. The placement of the Topping Out steel beam marks the completion of one of our biggest moments of construction to date. We are humbled and honored to have over 140 unionized tradesmen and women dedicated to making the first arena in Riverside County safe and successful. We can’t wait to begin enclosing the Arena and opening our doors later this year.”

Explained Bill Deiter, Project Executive, AECOM Hunt, “The behind-the-scenes work on these types of facilities starts way before the community starts to see any activity on site. Now that the community can begin to see the progress, the excitement and anticipation starts to build toward the grand opening. We at AECOM Hunt share in that excitement and enjoy engaging in the community’s interest in the project. This is what we do… we love building sports venues.”

The ‘CELEBRITY ACCESS’ further stated that located in the heart of the Coachella Valley, the 300,000 square foot arena will provide space for 11,500 seats, including modern suites and four premium hospitality clubs available only to 920 Premium Seats and Suite ticketholders.

The arena will serve as home ice for the National Hockey League (NHL) Seattle Kraken’s American Hockey League (AHL) team, the Coachella Valley Firebirds, and will host concerts and other live entertainment events as well as large meetings, award shows and exhibitions.

The arena is projected to open in the last quarter of 2022.

The ‘Acrisure Arena’ stated that in the Premium Suites of the arena one will be able to enjoy indulgent accommodations with excellent sightlines! Twenty Luxury Suites for 16 guests each are available!

When hosting clients, rewarding employees, celebrating a special occasion or simply gathering a group of friends, a Private Suite at Acrisure Arena is the perfect opportunity to entertain and impress in affordable luxury.

Entertaining at every turn

Premium seating offers the very best seats and VIP amenities for every game, concert and performance.

Four VIP Club Areas with a total 970 seats are available

Coachella Valley is getting its first professional sports team

The American Hockey League (AHL) has awarded its 32nd franchise to the Coachella Valley Firebirds, which will take the ice in 2022 at the Acrisure Arena.

An Acrisure Arena Partnership can offer companies an integrated marketing package to enhance their brand in the Greater Palm Springs region, throughout Southern California, and its international footprint with its seasonal residents. Although each package is tailored to the individual business objectives of its partners, a multitude of opportunities may include:

The Oak View Group (OVG) – the American global advisory, development and investment company for sports and live entertainment industries – is the operator of Acrisure Arena.

Stated Tim Leiweke, CEO and Co-Founder, Oak View Group, “This is the kind of development that really creates a major economic impact for all of Palm Desert and the rest of the Valley. We are committed to the community in making Acrisure Arena a major destination for the biggest artistes, concerts and sporting events in the world, and are pleased the arena will have such a positive, life-changing impact for the entire Valley.”

Said Irving Azoff, Co-Founder, Oak View Group, “As a local La Quinta resident, I am excited about having a world-class arena built. The venue will be a major must-play destination for top talent and be the ultimate fan-friendly showcase for both valley’s sports and entertainment attendees. We are proud to bring this state-of-the-art venue to fans in the Coachella Valley.”