Al Ahly Sporting Club, commonly referred to as Al Ahly, is an Egyptian professional sports club based in Cairo (Egypt), and is considered as the most successful team in Africa and as one of the continent’s greatest African giants. It is best known for its professional football team that plays in the Egyptian Premier League, the top tier of the Egyptian football league system.

Mohamed Serageldin, Board Member, Al Ahly SC, Egypt, give exclusive details to ‘Coliseum’ during the recently held Coliseum Online Week MENA 2021 as to the new stadium plans of the celebrated club, funding patterns and how they aim to go about to reach this objective.

Al Ahly SC is a historical club that was set up in the year 1907.

Al Ahly SC was headed by 14 Presidents and is one of the most decorated club in Egypt and the world with many a plume to its beret – 42 National League titles, 36 National Cup titles, 11 National Super Cup titles, and 9 African Champions League titles.

Mohamed Serageldin shared, “Al Ahly SC also holds the record of winning the maximum number of trophies in the world and second in terms of international titles won with 25, behind only Spanish professional football club Real Madrid who has won 26 titles.”

The club has gone from strength to strength with Serageldin sharing that the paid membership of the club came to around 150,000 families – “As per last statistics, our fan base in Egypt is about 72 percent (around 60 million population) and 20 million in the Arab region.”

Serageldin informed that Al Ahly enjoys a huge following on social media platforms too. It is one among the top 12 worldwide.

He further stated that football was not just the only passion of the club and it also had a huge social bent of mind.

Stated Serageldin, “Apart from football, we have 15 different sports -basketball, volleyball, gymnastics, swimming, etc. In our above mentioned four branches, we have facilities for 15 kinds of sports and not just football.”

Informed the top sports functionary, “Al Ahly’s market value has increased in the past few years and it is reaping the rewards. Our sponsorship rights are increasing rapidly. Every three years, it’s like double – for example, from 2015 to 2017 – it was around 250 million Egyptian pounds. Then in 2018 it became double – 500 million Egyptian pounds. And this has been the increase in our market value and in our sponsorship rights in the past few years.”

Al Ahly still does not boast a permanent residence of its own and operates out of the Al Ahly WE Al Salam Stadium in Al Salam City, Cairo.

Informed Serageldin, “It is a temporary stadium for Al Ahly and boasts capacity of 27,000. WE is the naming rights for the stadium -telecommunication company here in Egypt. It was built in 2009 and was reconfigured in 2019.”

On December 4th, 2019, Al Ahly announced that they acquired the above stadium from the Egyptian Ministry of Military Production for 25 years until 2045 as part of the club’s ‘2045 Vision’ with an option to return the stadium if Al Ahly’s new proposed stadium is built. Al Ahly’s ‘2045 vision’ includes Al Ahly Stadium, the development of Al Ahly’s TV channel, opening a new branch for Al Ahly in Luxor and an Olympic swimming center.

“We struck a deal and took over the stadium and decided to renovate the facility so that it wears the Al Ahly identity. We changed the color of the seating area to red in sync with the club’s color. Twelve VIP boxes are to be set up inside the venue and two of them are already complete and we are working on the other 10. Repurposing the arena comes with its set of benefits – the annual rent which we pay will come down considerably, additional source of revenue as Al Ahly will be taking a fixed amount of fee every year for using its name as a brand identity in the stadium. Moreover, the deal has been such that till we come up with our own venue, Al Ahly will be able to play in this facility and not shuttle between stadia – Borg El Arab Stadium and Cairo International Stadium – as has been the case so far. Once our new arena is done, we will shift from Al Ahly WE Al Salam Stadium.”

Serageldin maintained that to make their own venue, the necessary studies have been carried out which will boast of added attractions like:

He stated that the whole development will have to be accelerated so that it can meet the desired objectives:

Serageldin elaborated that they mainly depend on revenue from commercial rights, TV rights and the membership fee paid by members. Even in a pre-COVID-19 world, fans were not allowed into stadia in Egypt almost for six years due to the Port Said riot which broke out in 2012. The venue gates were open to supporters again in 2018 but soon to be closed again due to the coronavirus outbreak in 2019 worldwide. Nil gate-related revenue poses problems for any sports club.

He informed that international studies reveal that fans make for 27 percent of a club’s revenue and lamented, “We still cannot ‘cash’ in on the fan factor fully due to the above reasons despite Al Ahly boasting excellent fan base in Egypt”.

On February 1st, 2012, a massive riot occurred at Port Said Stadium in Port Said, Egypt, following an Egyptian Premier League football match between Al Masry SC and Al Ahly. Seventy-four people were killed and more than 500 were injured after thousands of Masry fans stormed the stadium stands and the pitch following a 3-1 victory by their team, and violently attacked Ahly fans using clubs, stones, bottles, and fireworks, trapping them inside the stadium.

Serageldin informed that Al Ahly’s planned arena will come up in Sheikh Zayed in 6th of October City (in Giza Governorate in Egypt) and will spread across 140,000 m2 of space out of a total of 210,000 m2 – “We want to start work on the first phase -140,000 m2 of the stadium as well as start work on the museum and the hotel. It will be able to fit in 60,000 spectators and the expected price tag comes to circa 250 million dollars.”

“As far as the revenue is concerned, we will primarily depend on tickets for sure. We will also depend on seasonal tickets – 10 percent from our VIP and VVIP seat. Revenue will also get generated in the form of parking, stadium tours and we also plan to rent out the stadium to few other teams. Naming rights and sponsors will also bring in the moolah,” he further elaborated.

Serageldin pointed out that added attractions like eateries and booth inside the planned arena will also help generate revenue and five-star hotels will also be built. The luxury hotels’ price tag will come to around 20 million dollars and is expected to bring in net profit of 3 million dollars per year.

Serageldin explained that there are various funding methods for stadia which meet international criteria:

Serageldin made it clear that they are definitely not using all the above models and summed up by stating, “We will use funding models that sits well with the sports law in Egypt and is also in tune with the market in the country. Maybe, the IPO model will be in tune with Al Ahly and the market in Egypt. But, we will be banking more on the securitization model. About a month back, our Board took a decision to initiate the first IPO company for our planned stadium to help us with the source of funding and aside from securitization, IPO and the BOT model is still on the table as an option for funding. The design part of the stadium is still in the works as the earlier design initiated was from a different perspective and we are taking a fresh look at the design part.” 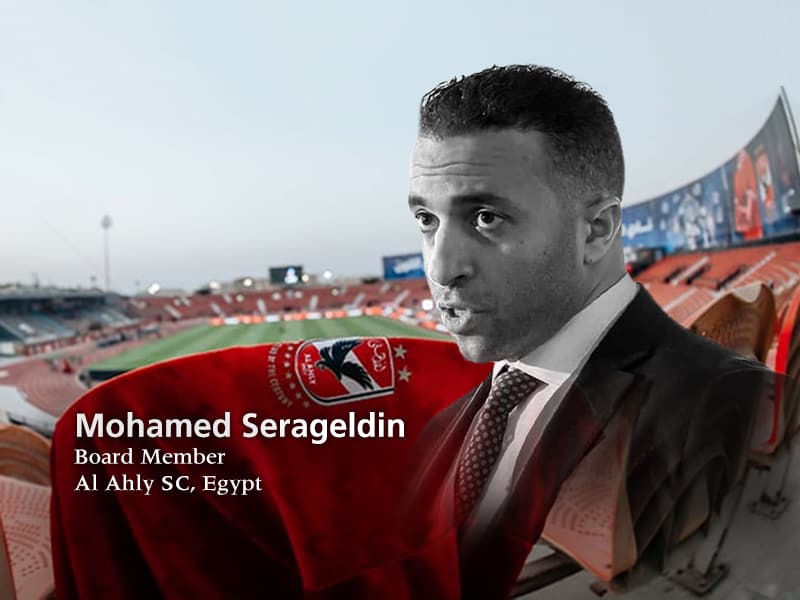 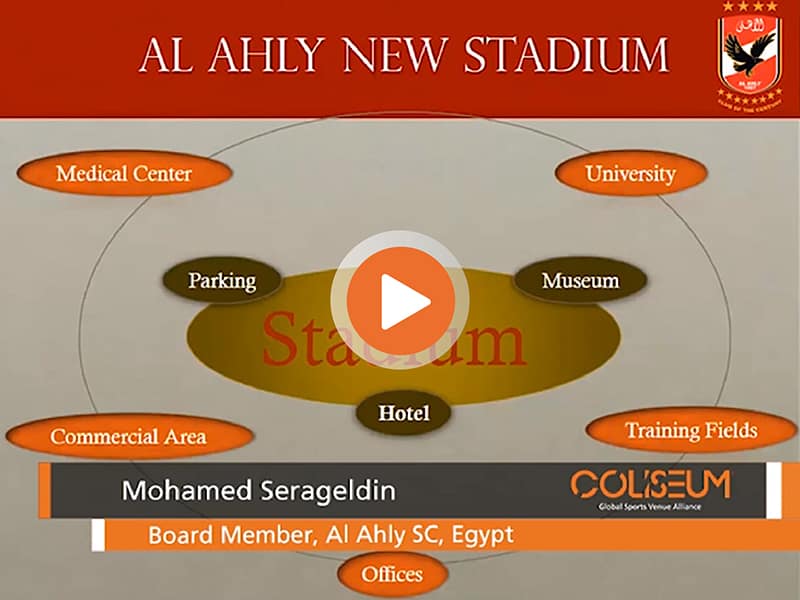 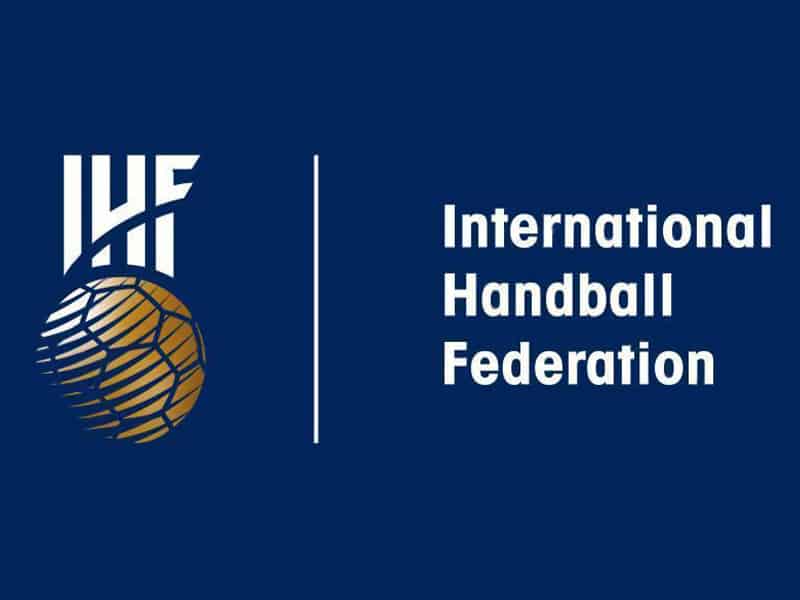