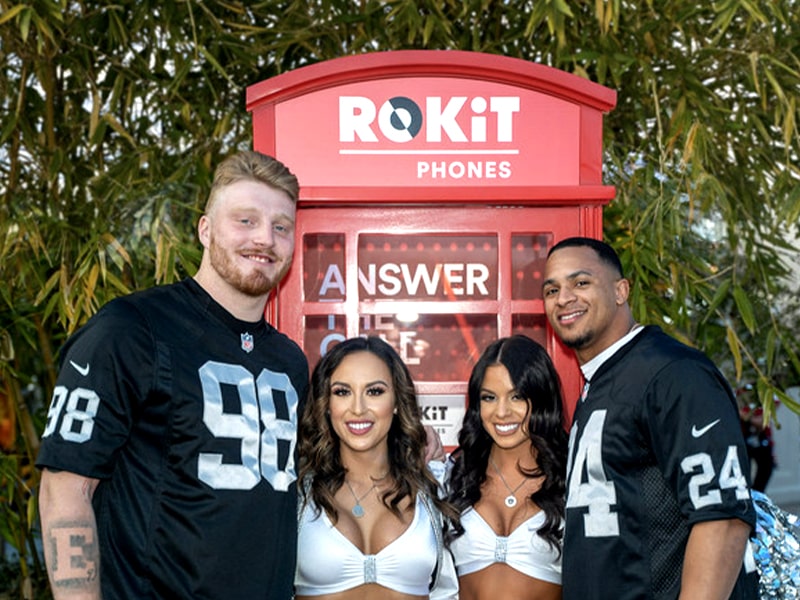 As Allegiant Stadium rounds into form the Raiders are still all business ahead of the team’s first kickoff in the Las Vegas later this year. They have connected with ROKiT Phones on a founding partnership deal.

As part of the deal struck, ROKiT Phones will also serve as the official phone of the Raiders, and will come up with a torrent of benefits for supporters. RoKiT Phones is part of the ROKiT Group global media company and creators of glasses-free 3D smart phones.

ROKiT Phones will give away year-round experiences such as season tickets, passes, VIP access and Allegiant Stadium tours to supporters. The telecommunications company will also give an exalted experience to fans on match days throughout the season by hosting competitions to win access to the ROKiT Field Club, an avant-garde 13,000-square-foot hospitality lounge at Allegiant Stadium situated on the 50-yard line.

The club will offer guests a unique view of the ‘The Men in Black’ running out to the field as well as a captivating experience focusing on ROKiT phones and services. ROKiT branding and commercial messaging will be integrated across all Raiders media channels including broadcast, digital, mobile, social and print assets. ROKiT Phones will become the presenting sponsor of the Raiders mobile app and will co-produce a new Raiders digital series.

As part of its company marketing strategies, ROKiT will be allowed to use team marks and player imagery and players will sport practice jerseys that display the company’s logo. The Raiders and ROKiT Phones will join hands on a wide array of community initiatives. Community initiatives will include the football team’s game day activations, player visits and product donations, amongst other forms of endeavor.

ROKiT enjoys considerable clout in the sports sponsorship market, which includes collaboration with the Raiders’ fellow NFL team the Los Angeles Chargers. ROKiT has served as the Chargers’ official wireless partner and title sponsor of ROKiT Field at Dignity Health Sports Park (multiuse sports complex), where the team has played before it moves to SoFi Stadium in Inglewood, US, later this year.

Commenting on the Raiders’ deal, Jonathan Kendrick, co-founder of ROKiT Phones, stated, “The team will attract audiences from all over the world and provide us with the perfect platform to educate people about our glasses-free 3D smart phones and services, available at disruptively low prices as well as our must-have life services packages.”

In January this year, the American global hospitality and entertainment company – MGM Resorts International – said it would create “unique and world-class entertainment experiences” for Allegiant Stadium after signing on as a founding partner. Las Vegas-based travel company Allegiant became the naming-rights sponsor of the stadium in August last year.

It was also disclosed in January that the Raiders had sold all available personal seat licenses (PSLs) for their move to Allegiant Stadium, generating $228m more than what was originally gauged. Stadium officials also maintained that the new venue will open on time on July 31 amid concerns over its roof.

The other sponsorship deals in ROKiT’s kitty include tie-up with W Series, the all-female motorsport championship, and the Houston Rockets National Basketball Association (NBA) franchise, among others.

“The Raiders welcome ROKiT Phones as the newest founding partner of Allegiant Stadium. We look forward to offering our fans and guests the numerous elevated fan experiences that this partnership with ROKiT will provide,” noted Raiders President Marc Badain.

Rokit makes a line-up of phone models at different price points, providing customers with life services, such as telemedicine, accidental death insurance and roadside assistance through its devices.