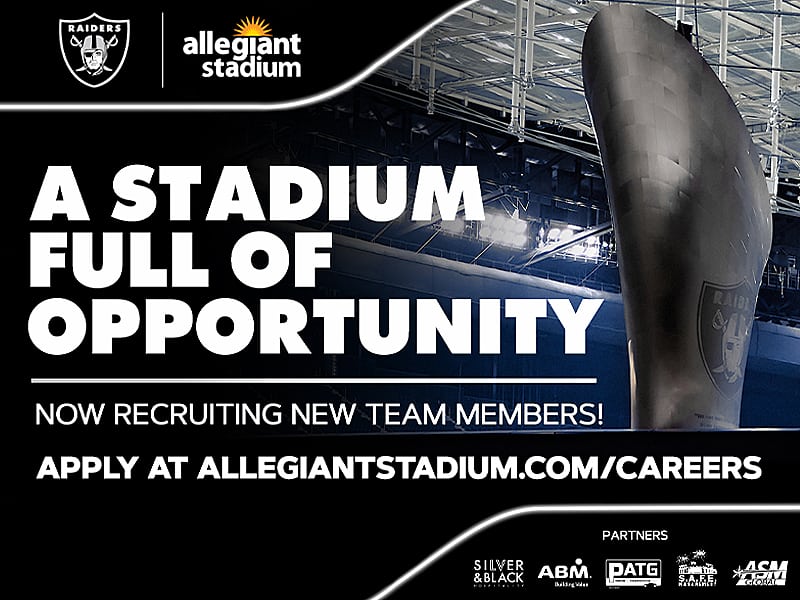 A news release sent out by Allegiant Stadium stated that these opportunities include roles in hospitality, food service, security, ticketing, customer service, custodial, and several other departments, during the nine home games played at the ‘Death Star’.

Located adjacent to the world-famous Las Vegas Strip (US), the Allegiant Stadium is a global events destination and the newest state-of-the-art entertainment venue in Las Vegas. Home to the iconic NFL team Las Vegas Raiders and the University of Nevada, Las Vegas (UNLV) Rebels college football team, the spiffy arena is ideally located for both visitors and locals. The technologically advanced facility is fully enclosed and climate-controlled with a capacity of up to 65,000.

The news release further stated that Las Vegas Raiders, Allegiant Stadium and partnering vendors will work closely with those who received job offers during last season’s virtual recruitment efforts to fill previously secured positions for this season and will look to new applicants to fill the additional 2,200 part-time jobs that are now available.

Southern Nevada’s premier global sports and entertainment destination, Allegiant Stadium will bring together the Las Vegas legacy of exceptional hospitality and the Raiders’ tradition of a Commitment to Excellence, culminating in a spectacular fan experiences each gameday.

The release further stated that interested individuals can visit the desktop and smartphone compatible application site for more information about or to apply directly to available positions.

Said Las Vegas Raiders’ President Marc Badain, “We are excited to recruit a diverse and winning team to help make the experience at Allegiant Stadium the best it can be. These additional jobs will help support economic growth in our local community while providing exciting and unique job opportunities for individuals with diverse experiences and backgrounds.”

All individuals will receive a confirmation email when applications are successfully submitted on the website. Based on position, recruiters will contact qualified applicants to arrange interviews or to discuss next steps. Interested individuals should be available to work at all Las Vegas Raiders home games as well as other various sporting and entertainment events at Allegiant Stadium, including the UNLV Football games. Hiring partners include The Las Vegas Raiders, Allegiant Stadium, Silver and Black Hospitality, The Raider Image, ASM Global, ABM, PATG, and S.A.F.E Management.

Allegiant Stadium’s virtual recruitment and introduction of new part-time jobs into the local economy will serve as a major step on the road to recovery for the entire Las Vegas community as it begins to reopen from the pause in economic operations due to COVID-19 which wreaked havoc in the United States. Allegiant Stadium is committed to hiring a workforce that reflects the diversity of Southern Nevada and is proud to reflect its inclusive culture in this hiring process, the release concluded.