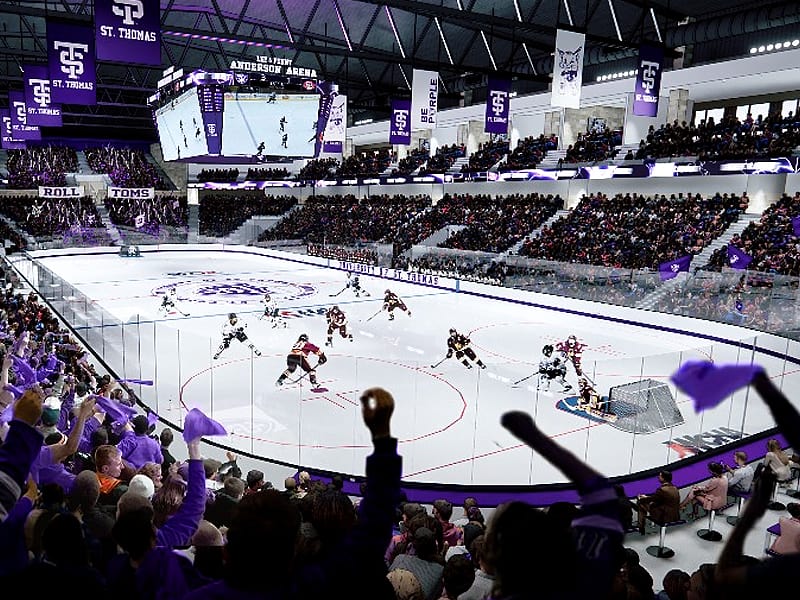 After a big leap to the National Collegiate Athletic Association (NCAA) Division I athletics, the intercollegiate athletic teams St. Thomas Tommies (US) has made its latest major move with a plan to build a new arena on campus for the basketball and hockey teams and other events.

‘New Haven Register’ stated that the St. Paul, Minnesota school announced on January 17th a record $75 million gift from longtime benefactors Lee and Penny Anderson toward the $175 million project scheduled to be finished by the Fall of 2025. The arena will have the Andersons’ names on it and is slated for capacity between 4,000 and 6,000 people, depending on the configuration.

Indianapolis (US)-based the National Collegiate Athletic Association (NCAA) is a nonprofit organization that regulates student athletics among about 1,100 schools in the United States, Canada and Puerto Rico (Caribbean island and unincorporated US territory).

The St. Thomas Tommies are the intercollegiate athletic teams that represent the University of St. Thomas in St. Paul and Minneapolis, Minnesota, US. The school’s athletic program includes 22 varsity sports teams. Their mascot is a Tiger named Tommie, and the school colors are purple and gray.

The University of St. Thomas is a private, Catholic university in St. Paul and Minneapolis, Minnesota (US). Founded in 1885 as a Catholic seminary, it is named after Thomas Aquinas, the medieval Catholic theologian and philosopher who is the patron saint of students.

Remarked Rob Vischer, President of the University of St. Thomas, “When they learned of this opportunity they jumped at it, because they recognized that this is key to our upward trajectory at St. Thomas. They’re obviously huge supporters of our mission.”

‘New Haven Register’ further stated that according to St. Thomas research of publicly known donations, this is the largest monetary gift to a university in Minnesota in history and the ninth-largest in the country designated for college sports. Currently, the Tommies play basketball in a 1,800-seat gym. Their men’s hockey and women’s hockey teams take the ice in a suburban facility about eight miles off the campus that holds 1,000 fans and is shared with prep and youth programs.

Kicked out of the Minnesota Intercollegiate Athletic Conference after 100 years for competitive imbalance, St. Thomas embarked on the first direct-to-Division I move from Division III in the modern history of the NCAA. That dovetailed with an overarching desire to raise the school’s national profile among the Catholic universities.

Put in Phil Esten, Athletic Director, University of St. Thomas, “As we looked at the campus experience for students and the energy and atmosphere that athletics adds to the community, which was really an important aspect of trying to bring hockey and keep basketball on campus. It makes it more accessible, not just for our student-athletes but for our students at large.”

The urban campus in Minnesota’s capital City is just 78 acres, making for a tight fit – and a tight-knit community. The Andersons gave $60 million in 2007 toward the student center and athletic complex that houses the current basketball arena that will continue to house the volleyball team.

Added Lee Anderson, “We want the students who come to St. Thomas to have the experience and form the connections that make their time on campus some of the most transformative of their lives.”

If the total fundraising goal of $131 million is met by the Spring of 2024, groundbreaking will take place then. The Tommies would then go from having the second-smallest basketball arena in the Summit League to the top half of the 10-team conference in capacity. The Oral Roberts University in Tulsa, Oklahoma (US) has the largest at more than 8,700.

St. Thomas also has currently the smallest rink in the Central Collegiate Hockey Association (CCHA), with the largest buildings in the league seating about 5,000 fans.

Deephaven, Minnesota (US)-based the Central Collegiate Hockey Association (CCHA) is a college athletic conference that participates in NCAA’s Division I as a hockey-only conference. The current CCHA began play in the 2021-2022 seasons, a previous incarnation, which the current CCHA recognizes as part of its history, existed from 1971 to 2013.

‘StarTribune’ stated that Rico Blasi knew that the University of St. Thomas’ 2020 move to the NCAA Division I athletics would require the St. Paul private school to upgrade its facilities. The men’s hockey coach just didn’t think it would happen so fast.

Thanks to a record $75 million gift – believed to be the largest to any university in Minnesota – construction of the Lee and Penny Anderson Arena could begin in 2024, with the doors open as soon as 2025.

The 4,000-capacity Lee and Penny Anderson Arena is a proposed indoor arena to be located in Saint Paul, Minnesota, US. The facility is planned to be the home arena of the University of St. Thomas basketball and hockey teams.

‘StarTribune’ quoted Blasi as stating after the announcement in a packed atrium at the Anderson Student Center, “This is not something that comes easy. Certainly the speed of how everything has unfolded, we’re very grateful for that.”

The gift goes a long way toward meeting the project’s estimated total cost of $175 million, and puts the University more than 60 percent towards its fundraising goal of $131 million, St. Thomas Athletic Director Esten said on January 17th. He repeatedly called the Andersons’ donation – one of several the couple has made over the years – “transformative”.

The center will be home to men’s and women’s hockey and men’s and women’s basketball. It will also serve a number of other functions, including commencement and convocation ceremonies. Its basketball courts and ice rinks may also be used by high schools and youth teams, Esten said.

The donation comes as the Catholic university in St. Paul is trying to build its reputation outside the Twin Cities and is relying, in part, on athletics to do that.

Added Vischer, “We are super strong in our region. We need to be known outside of our region, and athletics is one lever that we need to employ to grow that reputation.”