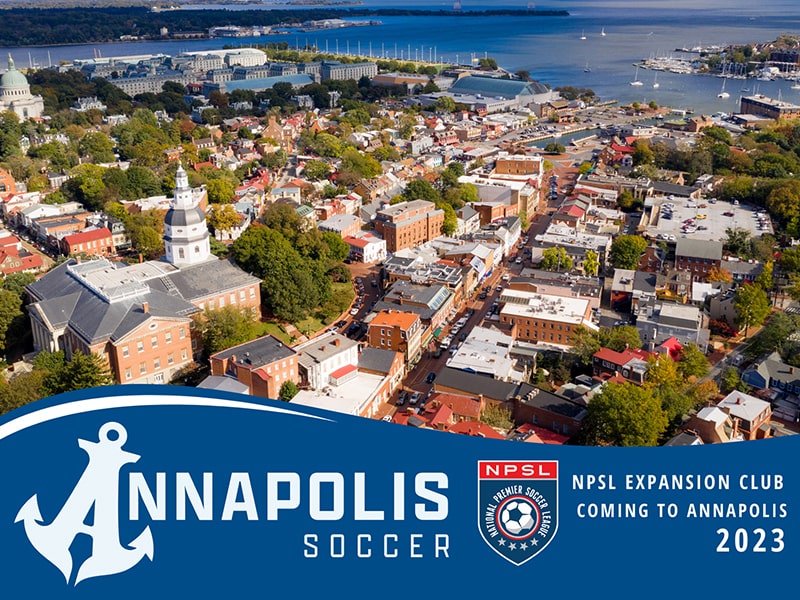 Exulted NPSL Managing Director Cindy Spera, “The NPSL is thrilled to enter this market. Annapolis has many of the attributes indicative of a successful grassroots soccer market: A community of sports enthusiasts, several college campuses and a plethora of family-owned businesses.”

The National Premier Soccer League (NPSL) is an American soccer league. The NPSL is a semi-professional league, comprising some teams that have paid players and some that are entirely amateur.

‘NPSL’ stated that the club will be led by Owner/Managing Partner Michael Hitchcock, Owner Kyle Beckerman and Owner Alex Yi.

Hitchcock is the founding partner of Playbook Management International (PMI). He has been involved in the active ownership of five NPSL teams, including Appalachian FC, Denton Diablos FC, Fort Worth Vaqueros FC, Napa Valley 1839 FC, and Lubbock Matadors. Through PMI, Hitchcock has successfully consulted and managed over 85 soccer leagues, teams, facilities, and events in the United States and around the world. He successfully launched the San Antonio Scorpions, consulted in the rebirth of the Tampa Bay Rowdies and built and managed Appalachian FC through a successful inaugural season. In MLS, he worked at every level from entry-level ticket sales representative to General Manager.

‘NPSL’ quoted Hitchcock as stating, “We’re excited to bring minor league soccer to Annapolis in a meaningful way. We want to provide opportunities for local players to pursue their dreams of playing soccer at the highest level while developing the next generation of sports management executives and providing an affordable, fun gameday experience for area sports fans and soccer supporters in Annapolis.”

‘Annapolis Soccer’ stated that it wanted the people of Annapolis to help select the name and brand for the club (soccer team).

All Fans who submit a VOTE Online by July 25th, 2022 will be entered into Annapolis Soccer’s ‘Name Your Naptown Soccer Club’ Contest where 10 Lucky Fans will each win the 2023 Inaugural Season Seat and 1 Very Lucky Fan will win a Season Seat For Life.

‘Annapolis Soccer’ further stated that just for voting for the name and brand of the club, fans have a chance to win a Season Seat for Life!