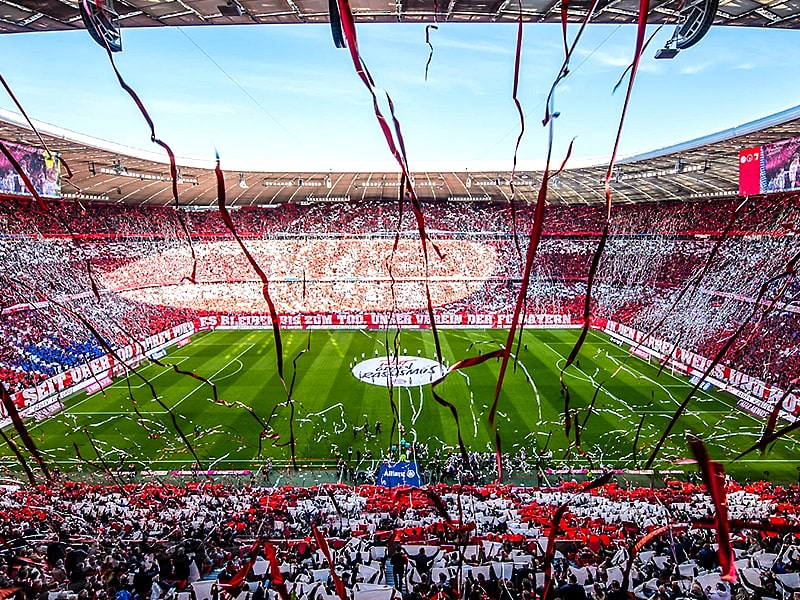 This is the moment that all FC Bayern Munich (Germany) fans have been waiting for with bated breath.

The ‘FC Bayern München’ stated that come April 9th, and the Bundesliga giants’ home ground – the Allianz Arena – can accommodate capacity crowd again. The top-flight will play against their peer team FC Augsburg.

The above decision is the outcome of a Cabinet decision arrived at on March 29th.

The Allianz Arena is a football stadium in Munich, Bavaria, Germany, with a 70,000 seating capacity for international matches and 75,000 for domestic matches. Widely known for its exterior of inflated ETFE plastic panels, it is the first stadium in the world with a full color changing exterior. The Allianz Arena serves as the home pitch of the FC Bayern Munich.

The ‘FC Bayern München’ further stated that while “basic protection measures” will continue to be in promulgation in the German State of Bavaria from April 3rd to April 30th, the majority of COVID-19 rules will no longer be in place.

This translates to the fact that FC Bayern can welcome 75,000 spectators to the Allianz Arena for the first time since the match against their peer team SC Freiburg on November 6th, 2021. Season tickets are also valid again from now.

The Executive Vice-Chairman of FC Bayern Munich, Jan-Christian Dreesen, stated, “Fans are the essence of football. We’re delighted, especially for our fans, that full-capacity crowds have been allowed at the Allianz Arena again. Fans add the magical touch to the game of football in our stadium. Allowing fans to be greeted back into the stadium fold augurs well especially now in the crucial stage of the season. We will continue to take all necessary precautions to ensure that spectators’ safety quotient is not compromised with.”

On the basis of the Cabinet decision, the 2G rule and social distancing rules have also been lifted for FC Bayern Munich home matches. The wearing of face masks is no longer mandatory but is still being highly recommended. In addition, alcoholic drinks can be served in public areas once again.

Tickets for Bayern Munich’s Bundesliga home match against FC Augsburg and the Champions League quarter-final fixture against the LaLiga team Villarreal CF (Spain) are available in the secondary market (HERE).