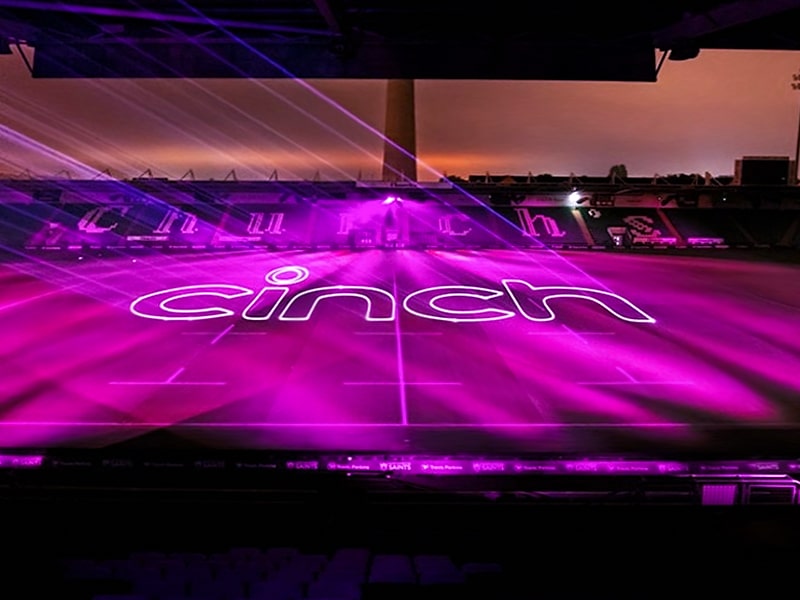 The ‘Sport Industry Group’ stated that cinch became an elite partner of the Gallagher Premiership club last year, and has penned a fresh deal now which further boosts its commitment to the club for an even longer term.

The ‘cinch Stadium at Franklin’s Gardens’ is a purpose-built rugby stadium in Northampton, England (UK). It is the home stadium of Northampton Saints. The stadium holds 15,249 people. The four stands are: Carlsberg Stand, cinch Stand, Church’s Stand, and Barwell Stand.

Surrey (UK)-based cinch is a car dealership platform that helps people browse, buy and receive cars from the comfort of their own homes.

Apart from becoming the Official Stadium Naming Rights Partner immediately, cinch will also serve as Saints’ Principal Partner as of the 2022-2023 campaigns, which will ensure its logo placed on the front of Saints’ playing kit from 2022-2023 onwards.

Remarked the club’s Chief Executive, Mark Darbon, “We are absolutely delighted to grow our partnership with cinch, an innovative and rapidly-growing brand. Over the last 18 months, we have navigated the most challenging period in the club’s history, so to have secured this genuinely transformational deal – which will underpin our commercial strategy moving forwards – is an incredibly significant moment for the club. cinch has committed to helping drive Northampton Saints forward for the long term, which we hope, in turn, will create many more opportunities for growth on and off the pitch.”

Added Darbon, “We know that Franklin’s Gardens has a special place in the heart of all Saints supporters, so the decision to rename the stadium was one not taken lightly. But this was a fantastic opportunity for the club to progress our partnership with a forward-thinking, digital brand in cinch that share our ambition and already boast an impressive stable of partnerships with premium sporting organizations across the UK.”

He asserted, “While the name of the stadium will change, the essence of the ground of course remains the same, and we look forward to creating many more fantastic memories and chapters in our history with our supporters in the coming years.”

The ‘Sport Industry Group’ further stated that as part of its association with Saints, cinch has also supported the Northampton Saints Foundation in delivering its social inclusion programs by supplying the charity with a brand-new minibus to transport students.

Outside of its partnership with the club, cinch has committed to supporting a number of grassroots sports clubs and initiatives in Northamptonshire, alongside the creation of over 1,000 new jobs and an academy for the training of skilled mechanics at the business’ new Rockingham and Corby locations in the United Kingdom.

Avril Palmer-Baunack, Constellation Automotive Group Chairman, cinch owners enthused, “We are delighted to transform our partnership with the Northampton Saints in the first stadium naming rights agreement in the club’s 141-year history. The team are firmly committed to reaching the top, and that drive matches ours as one of the fastest-growing brands in the UK. cinch has made significant investments in and around Northamptonshire, across vehicle preparation facilities, training and jobs, so it makes perfect sense that we continue to cheer on one of the county’s most loved sports teams with this new, comprehensive Principal Partner deal.”