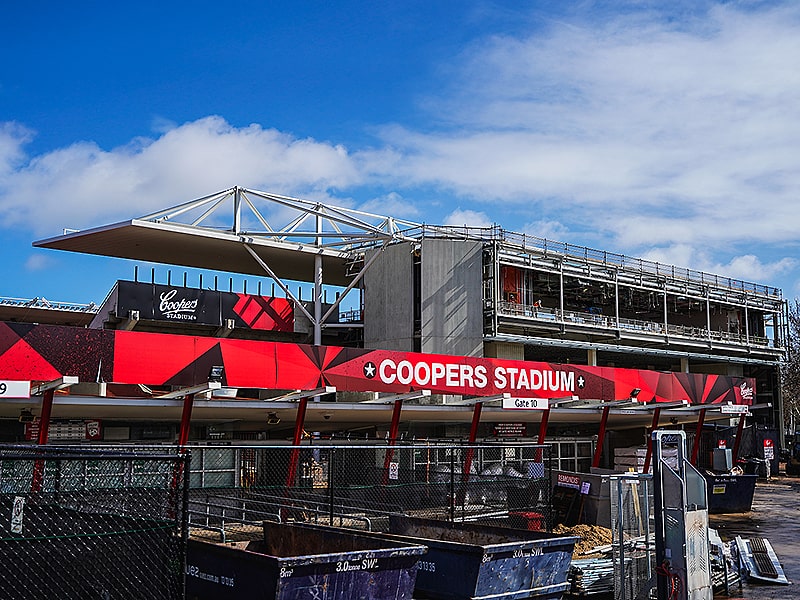 The Eastern Stand is back and accessible for the 2022-2023 seasons after it was unavailable last season as part of the Coopers Stadium redevelopment in Hindmarsh, Australia.

‘Adelaide United’ stated that it is a great win for ‘The Reds’ (Adelaide United FC) fans with the above mentioned part of the venue providing some of the most sought-after seats.

The Adelaide United Football Club is a professional soccer club based in Adelaide, South Australia, Australia. The club participates in the A-League Men under license from the Australian Professional Leagues.

The 16,500-capacity Coopers Stadium is a multipurpose stadium in Hindmarsh, an inner Western suburb of Adelaide, South Australia. It is the home of the Australian A-League team Adelaide United.

The A-League Men is the highest-level professional men’s soccer league in Australia and New Zealand. At the top of the Australian league system, it is the country’s premier men’s competition for the sport.

‘Adelaide United’ further stated that the project remains on schedule with further works ramping up to finalize stage two of the renovations over the next few months.

Here is an overview of what to expect following the new upgrades:

The most noticeable change to the Eastern Stand is the addition of a new roof, providing better protection from the elements. The roof structure is similar in design to the Western Stand ensuring uniformity. The new roof spans 2,200sqm and was constructed using over 220 tonnes of structural steel. The roof cantilever trusses overhang 16m over the existing stand to maintain the structural integrity of the design.

With the installation of the roof, 82 LED lights have been added, enhancing the overall matchday experience for fans as well as the quality of the whole broadcast product. The extra lighting exceeds FIFA World Cup™ standard at over 2,500 lux.

Extra speakers have also been mounted, augmenting the audio experience and sound clarity – a huge win for spectators.

Fans in the Eastern Stand will be treated to two new big replay screens located in the North West and South East corners. Each screen will be over 100sqm, ensuring fans will not miss any of the game. The existing North Stand big screen will remain as a scoreboard.

The corporate area on Level 4 enables an exciting new hospitality space to entertain clients and enabling networking opportunities. In order to maximize the hospitality experience, the facility also contains bar areas and an industrial kitchen space.

The floor area spans an impressive 350sqm, boasting floor to ceiling windows to provide magnificent views of the pitch as well as unobstructed views to the rolling Adelaide Hills in the East. On the Northern and Southern points of the stand, there are outdoor terrace areas which provide excellent open-air viewing.

New gates and turnstiles will speed up the process for spectators entering the venue, and boosting the entire fan experience with less congestion and wait times. Disability accessibility will improve following the upgrades with wider stairs for patrons and an elevator for those that require wheelchair access.

The corporate area will be accessible via an exclusive VIP entrance off Manton Street or from the corporate lobby within the stadium.

More male, female and accessible toilets have been installed as part of the redevelopment, ensuring less lines so fans miss as little of the action as possible.

All food and beverage outlets have been overhauled to expedite the customer experience and reduce excessive queues.

The project is currently running on-time and within budget. As mentioned previously, the stadium will be operational for ‘The Reds’ first Isuzu UTE A-League home clash of the season on October 30th with the new Eastern Stand corporate facility to open in mid-December.

The A-League Men (known as the Isuzu UTE A-League for sponsorship reasons) is the highest-level professional men’s soccer league in Australia and New Zealand.