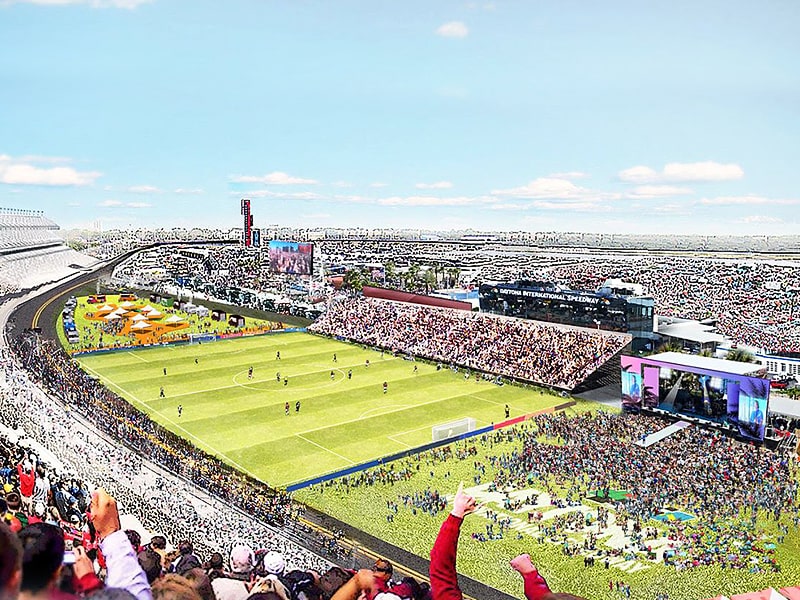 The Daytona International Speedway in Florida (US) brings new flavor to this year’s Fourth of July celebration with DAYTONA Soccer Fest, a one-of-a-kind event bringing world-class entertainment and professional soccer to the iconic venue known for the annual Daytona 500 race.

The ‘Daytona International Speedway’ stated that the World Center of Racing and Torneos, a leading company in the sports entertainment industry, announced on April 26th that the National Women’s Soccer League (NWSL) will join DAYTONA Soccer Fest with an official league match between the Orlando Pride and Racing Louisville FC.

The 1, 01,500-capacity Daytona International Speedway is a race track in Daytona Beach, Florida, United States. Since opening in 1959, it has been the home of the Daytona 500, the most prestigious race in National Association for Stock Car Auto Racing (NASCAR) as well as its season opening event.

The Fourth of July celebrates the passage of the Declaration of Independence by the Continental Congress on July 4th, 1776. The Declaration announced the political separation of the 13 North American colonies from Great Britain.

The Orlando Pride is a professional women’s soccer team based in Orlando, Florida (US). The team joined the National Women’s Soccer League, the top level of women’s soccer in the US, for the 2016 season. It became the 10th team to be added to the league.

The Racing Louisville Football Club is a National Women’s Soccer League expansion team based in Louisville, Kentucky (US). It began playing in 2021 at the 11,700-capacity Lynn Family Stadium. The expansion team was announced on October 22nd, 2019.

Torneos is a leading company with 40 years of experience generating sports content and creating value solutions for the sports and entertainment industry. It also offers the organization and production of events, the acquisition and commercialization of rights for events and competitions, as well as a complete offer of marketing services for sports that include the management of licenses and e-commerce for the main sports clubs and federations.

Said Frank Kelleher, President of Daytona International Speedway, “The two-day lineup at the Soccer Fest is very impressive, and now we have a nice local angle with our friends with the Orlando Pride. The Soccer Fest is going to provide a little something for the entire family – incredible soccer competition and a wide array of entertainment. At Daytona International Speedway, we are known for hosting world-class events, and Soccer Fest fits that bill. It’s going to be one heck of a Fourth of July weekend celebration.”

Stated Ignacio Galarza, CEO of Torneos, “We take great pride to bring our experience and longstanding tradition in the world of sports to this emblematic track as part of our regional expansion. For the first time in history, a professional natural grass soccer field will be built in the infield of this iconic venue and host a NWSL official match between two of the League’s great teams: The Orlando Pride and Racing Louisville FC. We can´t wait to see the NWLS stars playing world class soccer in this fantastic place.”

Added Mark Wilf, Orlando Pride Chairman, “We’re excited to bring this incredible match experience to both our players and our fans. The NWSL and women’s soccer continue to grow each day, and we’re happy to be part of this historic opportunity to showcase our club, our players and our league at one of the most iconic venues in American sports. It’s an honor for our club and league to continue to lead the charge for women’s professional soccer and to elevate our players with this marquee matchup at the Daytona Soccer Fest.”

Said NWSL Commissioner Jessica Berman, “We are thrilled to celebrate the DAYTONA Soccer Fest and equally excited to bring an official NWSL match to Daytona Beach, Florida. This truly one-of-a-kind event will be a special experience for both the players and our fans, and we couldn’t be more excited to have one of the most iconic and renowned sports venues in the world as a backdrop to showcase our game. Thank you to Daytona International Speedway, Torenos and our clubs in Orlando and Louisville for their continued partnership as we make this event a reality.”

Stated Gemma Bonner, Racing Louisville defender and captain, “We’re super excited to be playing in the NWSL Clash at Daytona against Orlando. We can’t wait to put a show on for you all. Our games against Orlando are always super exciting and go down to the last few minutes.”

In addition to the newly announced NWSL match, All-Time best players from the Americas and Europe go head-to-head in a Continental Clash for the ages for the Legends Game. World Cup Champions and League Legends collide on the field of dreams built for this weekend festival.

In addition to the soccer games, famous American rapper, Chance the Rapper, has been added to the entertainment lineup joining two Latin sensations. 2021 Latin Grammy Award winner Rauw Alejandro will perform his greatest hits during a 90-minute concert, along with Adassa ‘The Princess of Reggaeton’, who recently played a role in Disney’s ‘Encanto’ film.

Toyota, the world’s leading automotive company, has also joined the festival as the exclusive automotive sponsor of DAYTONA Soccer Fest. Adding to the excitement, Toyota will bring the action to another level with a thrill ride area, providing fans a chance to experience first-hand the exhilaration of the world-renowned Daytona International Speedway track. Fans will be treated to a variety of soccer themed games and activities at the fan zone area. Soccer enthusiasts will have the opportunity to play games, win prizes and spend a fun-filled weekend with the family, all while enjoying music from talented artistes performing at the event.

Said Darcey Rayner, Sponsorship Strategy, Integration and Activation, Toyota Motor North America, “We’re elated to join DAYTONA Soccer Fest for its inaugural festival as we continue to connect with fans with soccer, music and vehicles at this fun and entertaining event. To be back at the Daytona International Speedway adds to the excitement and we’re happy to celebrate with fans at this terrific family venue.”