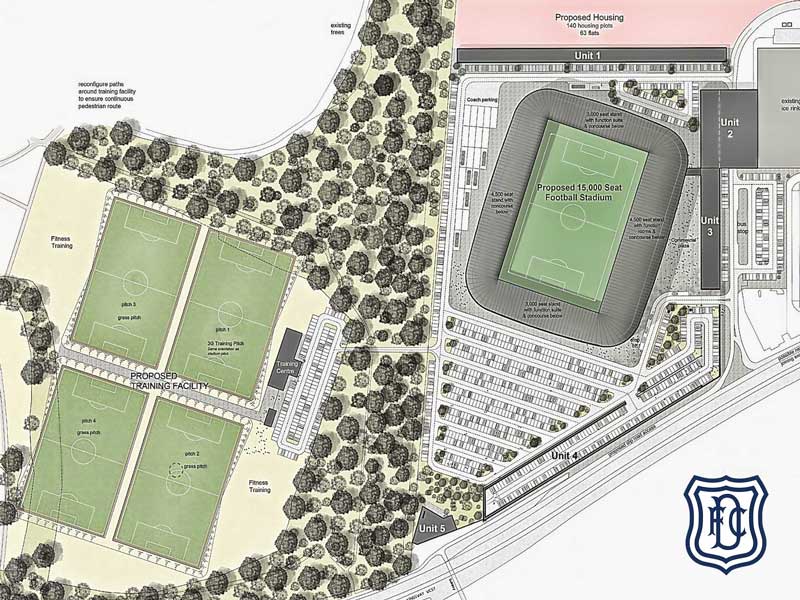 Scottish football club Dundee FC’s planned new stadium could rise well over £20 million – from an earlier estimate of £15-18 million – due to access requirements, according to media reports.

Despite the lower original estimates of the cost to build “Nou Campy”, the Dark Blues will plough ahead with the project they hope to complete by 2020, the Evening Telegraph reported.

A site between Camperdown Park and the city’s Ice Arena has been earmarked for the state-of-the-art facility that would include training pitches, a retail park and housing development. The fact it’s also adjacent to the Kingsway, however, means close scrutiny is being paid to how it would be accessed, the Telegraph reported.

Transport Scotland, the body responsible for the country’s trunk roads, require certain conditions to be met before they’ll give their blessing. Best case scenario would be for a new slip road to be included, meaning costs could be kept to a minimum, the report said.

The stumbling block with that would be traffic only being able to enter and exit on the northbound carriageway of the A90. If that meant a new junction had to be constructed to allow access for south-bound vehicles, the increase in cost would run well into seven figures.

Talks between the club and Transport Scotland have already taken place but the authority will only give their verdict once they’ve received detailed proposals. “Road safety is of paramount importance for everyone that will use the stadium, the associated commercial developments and the wider road network,” the Telegraph quoted a spokesman as saying.

“We’re working with the developer to get absolute clarity on their proposals and the potential impact on issues like vehicle access to and from the site. We have asked the developer’s consultant to carry out an appraisal of all available access options for the site. Once this is completed, we will offer our opinion on the proposals.”

With £1.2 million being spent to buy the land and having identified the move as vital to a successful future, Dundee remain determined to push forward.