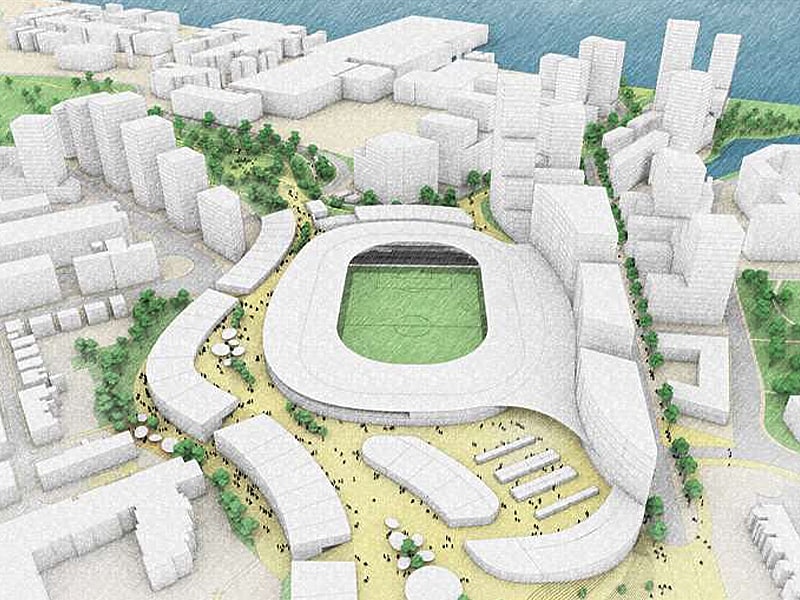 Plans have been submitted to erect a new 8,000-seater stadium for the National League South club Ebbsfleet United F.C. (UK) at the heart of a waterfront leisure and shopping destination.

‘KentOnline’ stated that Ebbsfleet United wants to secure the club’s long-term future on the pitch while also helping to reshape its industrial surroundings.

The Ebbsfleet United Football Club is a professional football club based in Northfleet, Kent, England (UK). As of the 2021-2022 seasons, the club competes in the National League South, the sixth tier of English football.

The 4,769-capacity Stonebridge Road Stadium is a multipurpose stadium in Northfleet, Gravesend, Kent, England (UK), also known as the Kuflink Stadium for sponsorship reasons. It is primarily used for football matches and serves as the home venue of Ebbsfleet United F.C. The Stonebridge Road was constructed in 1905, and was initially the home of Northfleet FC, which merged with Gravesend FC in 1946.

‘KentOnline’ further stated that plans have been submitted to the Gravesham Council to create a new multipurpose ground with improved facilities on the site of its existing home on Stonebridge Road.

The National League South outfit has also teamed up with property partners to create a blueprint for Northfleet Harbourside, a new shopping and leisure destination.

It will cover a brownfield site of around 50 acres and will feature a new retail village consisting of 225,000 sq ft of shops, cafes, medical services, offices, new homes, and community venues.

This is proposed to sit alongside a 200-bed hotel, 3,500 homes and 180,000 square foot of office space to include incubator spaces for startups.

The team behind the vision has now officially submitted its plans for consideration.

The submission follows a series of briefings with football supporters, local councilors and groups and two rounds of consultation events from July to September, where the proposals were shared with members of the public.

These events also provided residents with an opportunity to view the plans, meet members of the project team and ask questions about the proposals.

In a projected boost to the local economy, the proposals also hope to deliver up to 3,000 new jobs in the retail, leisure and service sectors.

This will include apprenticeships during construction and end use employment opportunities. One can learn more about the proposals here.

A spokesperson from the Northfleet Harbourside said, “We are delighted to have submitted our outline planning application to the Gravesham Council. Since we announced the proposals in July, we have been encouraged by the feedback and involvement from the residents and the Gravesham stakeholders. We would like to thank everyone for the feedback provided to date. The Northfleet Harbourside is for Gravesham. Our vision is to build a new stadium for the Ebbsfleet United Football Club and its supporters, investing in its facilities and securing the long-term future of the club. This will be accompanied by wider community benefits for all creating a place for everyone to be proud of and enjoy.”

Once the submitted application has been validated by the Council, the local authority will then carry out its own consultation on the application.

Ebbsfleet United Chief Executive Damian Irvine said the consultation process had been “Very positive. A number of people engaged both in person and online webinars and through our online portal on the website.”

Common concerns that cropped up were “part and parcel of development generally” he added, and included things like traffic management, resources supply and services in the area.

He also stressed the aim of the club was to help positively reshape the local area while also paying homage to its riverside and industrial heritage.

If approved, the initial build phase would see the club play elsewhere for the first two-to-three years with additional phases likely taking place over an eight- to 10-year timespan.

Key concerns for supporters related to the identity of the club, ground-sharing arrangements during the build phase, navigating land rights with local landowners, and the long-term sustainability of the plans.

But overall fans were supportive of the proposals which they labeled as “exciting”.

The stadium proposals also factor in “green zones” such as the parkland and children’s play areas.

This will include more than three kilometers of pedestrian and cycle links through the community and along the River Thames improving connectivity to nearby developments in the Gravesend town center.

Such improvements to the local infrastructure and road structure could also align with proposals to extend Crossrail into Kent via Northfleet and Ebbsfleet stations – but bosses say they do not currently form part of the plans.

The Gravesham Council is expected to take a decision on the application around May next year.