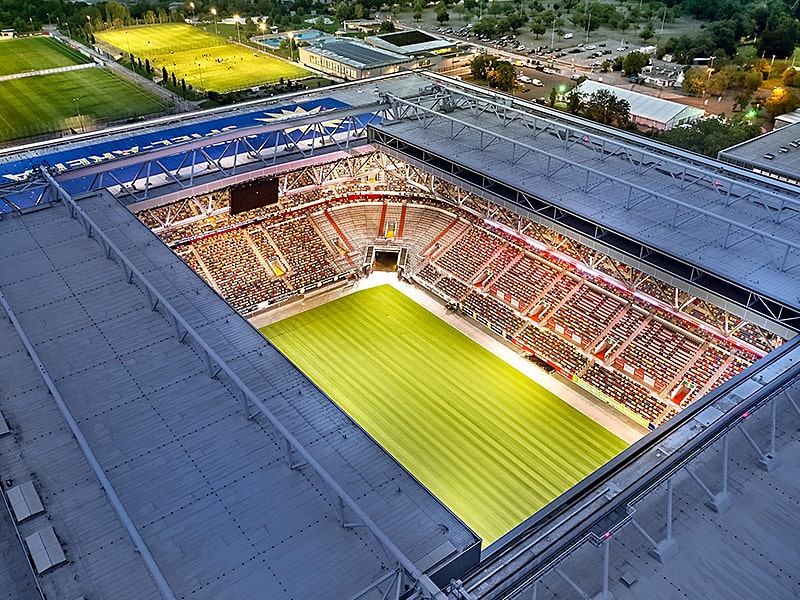 ‘HERE TO PLAY!’ This is the motto for Europe’s 2024 European Handball Championship in Germany which will be held from January 10th to January 28th, 2024, at the MERKUR SPIEL-ARENA in Düsseldorf. The event will be known as EHF EURO 2024.

‘D. SPORTS’ stated that the cream of the crop handball teams from Europe will take part in the showpiece event. The event will go down in the annals of history as the first showcase wherein 24 teams will be playing in just one host country for the continental title and the opening game on January 10th, 2024, is going to set the benchmark as a world record.

The 2024 EHF European Men’s Handball Championship will be the 16th edition of the tournament and the third to feature 24 national teams. It will be hosted in Germany from January 10th-28th, 2024.

The MERKUR SPIEL-ARENA, previously known as the Esprit Arena, the LTU Arena, and as the Düsseldorf Arena, is a multifunctional football stadium in Düsseldorf, Germany. The stadium holds 54,600 and has a retractable roof. Its special heating system allows the stadium to stay warm even during the peak Winter season.

Starting August 28th, 2022, exactly 500 days are left for the handball show to take place. Tickets for the opening match day – featuring the German national handball team and three other teams – are available from EUR 25 on the event websites www.heretoplay.com and www.eventim.de.

Maintained Mark Schober, Chairman of the Board of the German Handball Federation, “With the EHF EURO 2024 being held in Düsseldorf, we want to provide as many people as possible the opportunity to enjoy world-class level of handball games live being played by the numero uno teams. If more than 50,000 fans come to Düsseldorf for the opening game, that would be a historic world record and the beginning of a huge handball party, for which ‘HERE TO CELEBRATE’ is the perfect motto!”

Commented Hendrik Wüst, Prime Minister of North Rhine-Westphalia, who is himself a former handball player, “In 500 days’ time the European Men’s Handball Championship will start with the opening game of the German team in Düsseldorf’s MERKUR SPIEL-ARENA. In front of 50,000 spectators, we will signal the start of a successful tournament here in the sporting State of North Rhine-Westphalia and celebrate a majestic sporting event with our guests from Europe.”

The year 2024 will begin with the handball showcase in North Rhine-Westphalia, the Union of European Football Associations (UEFA) EURO 2024 will also be held in Germany and these two major shows will be followed by the Olympic Games which will be held in Paris, France (Paris 2024). The ‘Sports City’ of Düsseldorf is gearing up for the handball spectacle which is expected to be attended by a humongous crowd.

Added Michael Brill, Chief Executive Officer (CEO), D.LIVE, “I’m already getting goosebumps thinking about the opening game of the European Handball Championship in January 2024 in Düsseldorf. In 500 days’ time, the MERKUR SPIEL-ARENA will be transformed into a handball facility and will offer the perfect setting for this historic event. The project team, consisting of Arena and D.SPORTS experts, is working with the DHB by the sweat of their brows to make the sporting spectacle a roaring success. We will be starting off the eventful year 2024 from the MERKUR SPIEL-ARENA – a year in which sporting extraordinaires will be held.”

An additional inner grandstand will be added to the MERKUR SPIEL-ARENA which will be able to hold 7,000 spectators.

Asserted Schober, “Fans will be able to get up close view of the action from the inner stand.”

Reminisced Alfreð Gíslason (Icelandic handball coach), “In 2007, as Iceland’s national coach, I was able to witness the World Championships in Germany, but I think the EHF EURO 2024 will be even more grandiose.”

The Icelander has been the national coach of the German national handball team since February 2020 and is looking forward to the upcoming home games.

Added Gíslason, “The very thought of the opening game being held in front of more than 50,000 fans in January 2024 in Düsseldorf motivates every player to put their best foot forward to be a part of the European Championship team.”

The complete program of the EHF EURO 2024 includes 65 games. In the current first phase of advance sales, only ticket packages for the respective groups of all tournament phases are available. Preliminary matches of the German national team can be experienced live from 29 euros. There are attractive discounts for families, clubs and other stakeholders from price Category 3 upwards. The second phase of advance sales begins shortly after the draw for the EHF EURO 2024 scheduled for May 11th, 2023.

Hosts Germany is in Group A, and will play the opening game in Düsseldorf on January 10th and then move on to Berlin. Germany capital Berlin also hosts Group D with – qualification still to be contested – Norway. Mannheim expects qualifier Croatia (Group B) and the current European champions Sweden (Group E). Munich is looking forward to Iceland (Group C), which also has to qualify, and Denmark, third at the European Championships and world champions (Group F). The two best teams in groups A, B and C will play their main round matches in Cologne, while the top duos in groups D, E and F will move on to Hamburg.