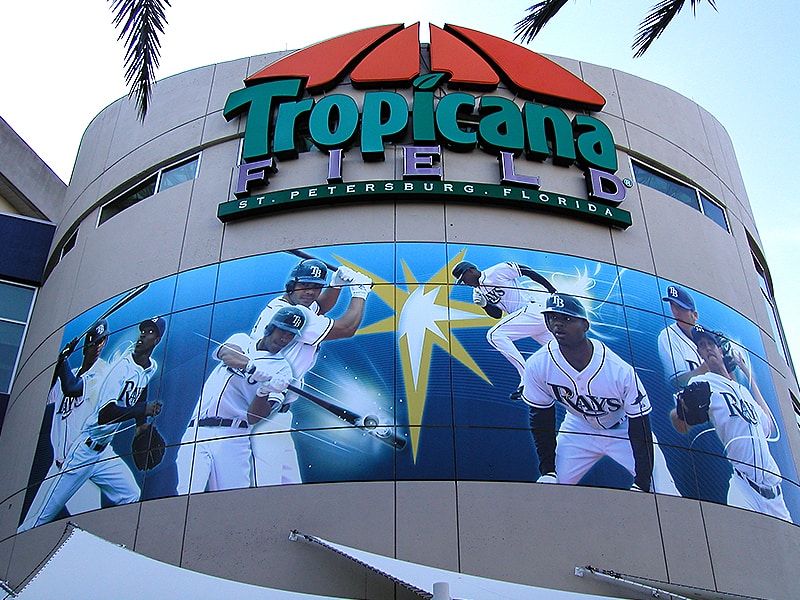 The Major League Baseball (MLB) team Tampa Bay Rays has endured significant speculation over whether or not the team would have to be moved out of the Tampa Bay region over the past several years. Their residence – Tropicana Field’s (St. Petersburg, Florida, US) lease ends in 2027, and owner Stu Sternberg even proposed a plan to split time between Tampa and Montreal (Canada). This plan was quickly shut down by the MLB, however, as all fans have truly wanted is a new stadium located in the actual City of Tampa in Florida. With the ‘Trop’ currently residing in St. Petersburg, fan pressure to get a new home field in Tampa has been building and getting stronger than ever.

‘In an article from cbssports.com written by R.J. Anderson’, MLB Commissioner Rob Manfred was able to update the baseball world on the status of both the Oakland Athletics and Tampa Bay Rays as they pertain to a new stadium. Anderson explained that Manfred “Voiced his confidence that the Rays will be able to work out something to remain in the region… I see Tampa differently [than the Athletics].”

‘CBS Sports’ further stated that in the case of Oakland, the Athletics are primed to be moved out to Las Vegas (US) due to very poor attendance and TV ratings, also coupled with a deteriorating stadium, among a myriad of other reasons. It also just makes sense with the former Oakland Raiders (now the Las Vegas Raiders) completing a successful move to Vegas in the National Football League (NFL) and the Golden State Warriors now playing home games in San Francisco in the National Basketball Association (NBA). But back to the Rays!

The Tampa Bay Rays are an American professional baseball team based in St. Petersburg, Florida, US. The Rays compete in Major League Baseball (MLB) as a member club of the American League East division. Since its inception, the team’s home venue has been the Tropicana Field.

The 42,735-capacity Tropicana Field is a multipurpose domed stadium located in St. Petersburg, Florida, United States. The stadium has been the home of the Tampa Bay Rays of Major League Baseball (MLB) since the team’s inaugural season in 1998.

The Oakland Athletics are an American professional baseball team based in Oakland, California, US. The Athletics compete in Major League Baseball (MLB) as a member club of the American League West division. The team plays its home games at the 63,132-capacity Oakland Coliseum.

The ‘A’s’ have drawn out new venue plans at the Port of Oakland’s Howard Terminal. However, their entire plans still seem to be shrouded in uncertainty.

In Las Vegas, the ‘A’s’ are in negotiations on a pair of potential sites where they could relocate and build a $1 billion ballpark if Oakland doesn’t pan out.

‘RCG’ stated that the Tropicana Field isn’t exactly every baseball fan’s dream, and, in fact, it’s one of the only domes remaining in the league without a retractable roof. It’s also not very accessible to fans, with the stadium planted right in the heart of St. Pete rather than the much more populated City of Tampa. While the Rays’ average fan attendance has them sitting in the 28th spot out of 30 according to this ESPN graphic, the TV market they have amassed is truly their saving grace. This list highlights Tampa Bay as the 13th biggest TV market in the nation in terms of the four major sports, and Tampa doesn’t even have an NBA team! All Cities ahead of them in viewership own a franchise in each of the major sports, with the exception of Atlanta and Houston, which have no National Hockey League (NHL) team, and Seattle, which has no NBA team. Nevertheless, this is impressive from a viewership standpoint, proving the Rays are staying more than relevant here in Tampa and retaining a steady fan base.

‘RCG’ further stated that the next step from here is to… finalize the stadium plans! Obviously, this is way easier said than done. This article details a little bit more about the proposed land area for the new stadium, including Ybor City (neighborhood in Tampa, Florida) and possibly even the current site of the Trop. A location is one of the hardest parts to piece together, and on top of that, significant funding will be needed along with construction development plans for not only the new park but the surrounding area as well. Pressure from not only fans but the MLB as well has added some juice to this permanent Tampa residence train, and with plans trending in a positive direction, now is more perfect than ever to keep the momentum rolling for a new home.