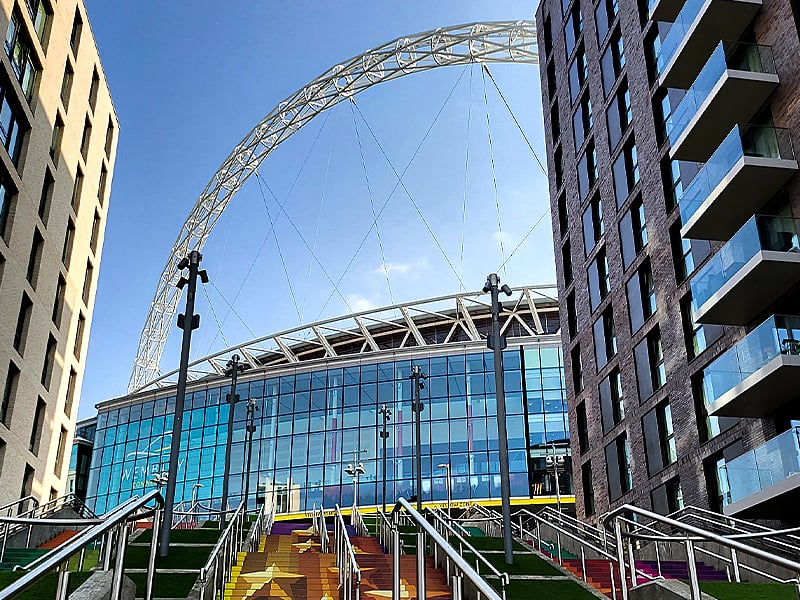 The Wembley Stadium in Wembley, London (UK) plans to install a new gated fence to beef up security around the venue following violent disorder at the EURO 2020 final.

‘Evening Standard’ stated that the Home Office figures show that of the 90 football-related arrests made at EURO 2020, 39 were at the Italy match, 28 at the game against Scotland (UK) and 18 at the semi-final against Denmark.

The Union of European Football Associations (UEFA) EURO 2020 Final was a football match that took place between England and Italy at the Wembley Stadium in London, England, on July 11th, 2021 to determine the winner of UEFA EURO 2020.

There was no method in the madness and it was total mayhem when groups of England fans without tickets forced their way through the Wembley turnstiles before England’s EURO 2020 final against Italy on July 11th, 2021 which Italy defeated England on penalties. Italy was crowned the European champions after shootout win over England.

Supporters breached security barriers outside the stadium and squeezed behind ticket-holders or burst through the electronic gates that allow entry to the concourses and seats. Witnesses said the numbers may have been in the hundreds. There were unconfirmed reports that hundreds of fans charged towards a disabled entrance door when it opened.

‘Evening Standard’ further stated that a report by Baroness Casey (a British Government official working in social welfare) following the tournament found there was a “collective failure” in planning for the final which saw about 2,000 people get into the stadium illegally with images of the violence beamed around the world.

She branded the day “a source of national shame”.

The Football Association (FA) is backing new plans submitted to the Brent Council (civic center in Wembley, London), the borough in which the stadium is based, which will “enhance security standards”.

New perimeter fences at the entrances will aim to “deter unwanted guests climbing and rushing” towards the gates.

The application claims this will “prevent unauthorized or unticketed fans from being able to push through as a way of access into the stadium”.

On the day of the EURO 2020 final, around 10,000 fans gathered at Wembley by midday despite the England and Italy match not kicking off until 8 pm.

Thousands of ticketless fans stormed the gates and broke through 17 disabled entrances and fire doors.

According to the Local Democracy Reporting Service (LDRS), new entrance portals could be built at the Club Wembley, media, staff, and VIP entrances to protect visitors.

A decision on whether or not to approve the plans will be determined by the Brent Council on a date yet to be fixed.