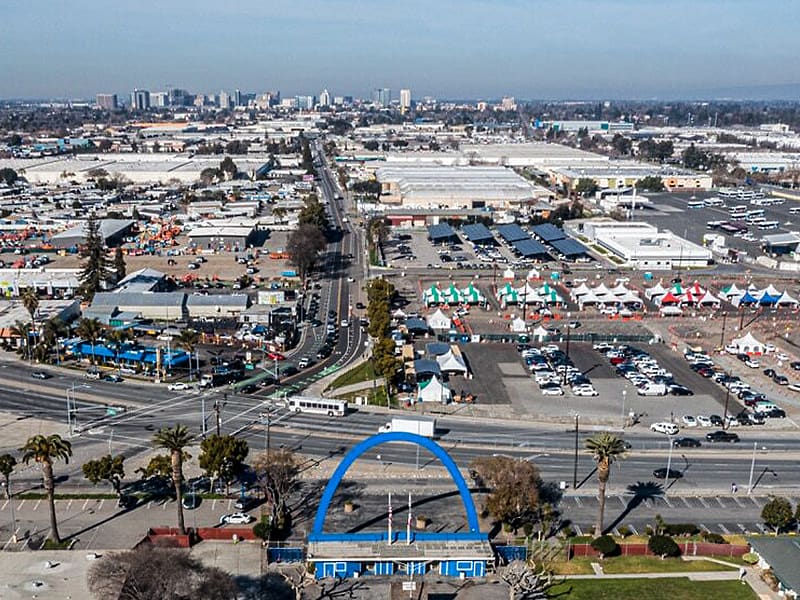 The Major League Cricket (MLC) and the County of Santa Clara (California, US) announced on January 19th the approval of an exclusive negotiation agreement (ENA) to move forward with lease negotiations and design approvals to develop a world-class cricket stadium on a 14-acre parcel of the Santa Clara Fairgrounds site in San José.

The ‘Major League Cricket’ stated that the development would see a significant multimillion dollar investment by Major League Cricket for stadium construction, with MLC planning to work with the internationally renowned architects HKS to design a premier cricketing destination in North America.

Major League Cricket (MLC) is an upcoming professional Twenty20 cricket league in the United States. Operated by the American Cricket Enterprises (ACE) and sanctioned by USA Cricket, it plans to begin play in 2023, with six teams in major US Cities under a single-entity model.

The Exclusive Negotiation Agreement (ENA) means an agreement entered into between the agency and a private developer whereby the parties agree to negotiate for a set period of time, and to refrain from negotiating with others, for the development of a particular site.

The 5,500-capacity Santa Clara County Fairgrounds is a flexible indoor and outdoor event venue perfect for shows, events, concerts, and more. While most famous for hosting the Santa Clara County Fair in late July/early August, the Fairgrounds hosts cultural events, indoor and outdoor concerts and trade shows throughout the year. The event venue sits in the Spartan Keyes neighborhood of San José, California.

The ENA marks a significant step forward in the development process and outlines key dates and obligation over the next 12 months for both Major League Cricket and the County of Santa Clara to agree to terms and gain the approvals required for the construction of a stadium with a maximum capacity of 15,000. The location and its demographics make the Santa Clara County Fairgrounds suited perfectly for the development of a marquee home for the world’s second-most popular sport, with one of America’s largest cricket fan bases located in the Bay Area.

The ‘Major League Cricket’ further stated that the stadium is a key part of the proposed redevelopment of the 150-acre Santa Clara County Fairgrounds site, located in the heart of Santa Clara County and San José. The stadium will be home to Major League Cricket’s Bay Area franchise and serve as a key hub for the U.S. National Teams. It would also be a potential host venue for major international cricket events. USA Cricket is expected to bid for future men’s and women’s World Cup tournaments, with the 2024 Men’s T20 World Cup already set to be co-hosted by the United States and the West Indies. The International Cricket Council (ICC) (world governing body of cricket) is also bidding for the inclusion of cricket in the 2028 Olympic Games to be held in Los Angeles (US).

Said Otto Lee, County of Santa Clara District 3 Supervisor, “Cricket is a sport that’s increasing in popularity in the US and Santa Clara County. The addition of an international cricket venue to the Santa Clara County Fairgrounds would help attract large numbers of visitors from around the world to the region. We look forward to finalizing plans with Major League Cricket to move forward with this exciting development for Santa Clara County.”

Said Parag Marathe, Chair of USA Cricket Board, “Major League Cricket’s plans for an international-grade cricket stadium in one of the country’s most vibrant and diverse metropolitan regions add to the fantastic momentum for cricket’s growth nationwide. The Bay Area – and Silicon Valley in particular – is an ideal location for this development that could serve as a potential venue for future major international events and as a home stadium for USA National Team matches.”

Said Abraham Andrade, Executive Director of Fairgrounds Management Corporation (FMC) which manages the Santa Clara County Fairgrounds, “The Santa Clara County Fairgrounds has a strategic plan and vision for our future as a premier sports and entertainment destination and the addition of this stadium is one of those key components. We will continue to announce additional, exciting growth strategies in the coming months and also celebrate major milestones, such as this one, along the way.”

Major League Cricket, America’s first professional T-20 cricket competition, represents the most ambitious and transformational venture ever undertaken in the American cricket landscape. Focused on staging world class Twenty20 cricket for American cricket fans, Major League Cricket will feature top players from around the globe and provide a stage for domestic cricketers to showcase their talents to a worldwide audience. Six teams are expected to begin play in major Cities across the country, starting in the summer of 2023. The plans for development in Santa Clara follow the already-announced Major League Cricket stadium approved for construction in Grand Prairie, Texas.