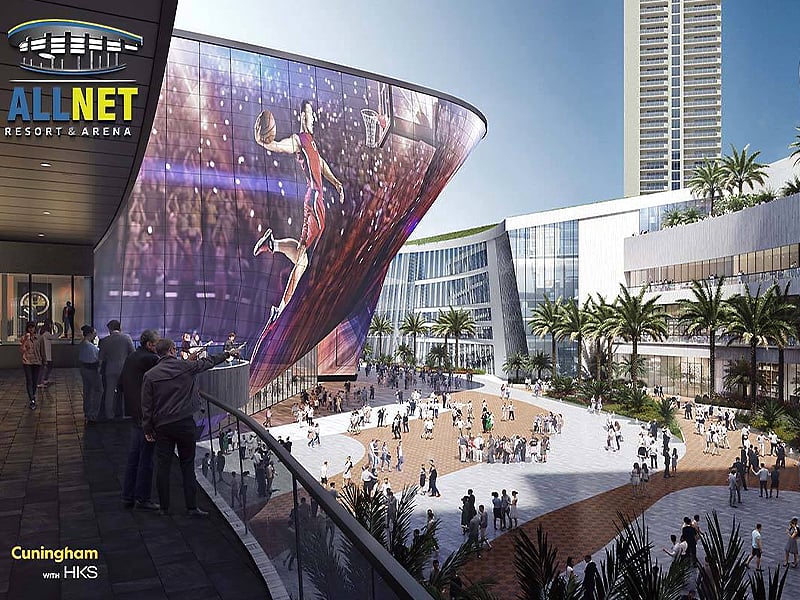 The long-planned Las Vegas Strip All Net Resort & Arena (US) is a step closer to reality, as $4.7 billion has been pledged toward the retractable-roof arena project.

The ‘Arena Digest’ stated that to say that the All Net Resort & Arena has been a long-running project is an understatement: The Silver State Arena was first pitched in 2010 at the Wet‘n’Wild water park site on the North end of the Strip as a home for National Basketball Association (NBA) and National Hockey League (NHL) teams. Since then, the 20,000-capacity T-Mobile Arena in Paradise, Nevada (US) has opened as home of the Vegas Golden Knights (NHL), the National Football League’s (NFL’s) Las Vegas Raiders set up shop at the 65,000-capacity Allegiant Stadium in Nevada, the Oakland ‘A’s’ have explored a move to a Vegas ballpark, and the Major League Soccer (MLS) is negotiating over an expansion team in 2024 or later.

The 22,800-capacity Las Vegas Strip All Net Resort & Arena is a planned entertainment complex in Las Vegas (US). A project of businessman and former baseball player Jackie Robinson, the complex will encompass a resort hotel, retail and restaurant space and a multipurpose arena with a retractable roof.

The Wet‘n’Wild Las Vegas is a water park in Spring Valley, Nevada. The park is part of Village Roadshow Theme Parks’ Wet’n’Wild chain of water parks located across the world. The park opened in May 2013.

The ‘Arena Digest’ further stated that still, the news that the Active Capital Holdings is committing more than $4.7 billion toward the project is notable. The current plan calls for a large retractable-roof arena – some 23,000 seats designed for the NBA – as well as two luxury hotels at 44 stories and 63 stories, retail and conference space, and entertainment options, including a bowling alley and movie theater. Construction had begun several years ago, with the site lying fallow for many years. Project organizer Jackie Robinson now says construction on the unique project will begin in June or July this year.

Active Capital Holdings Executive Trustee Arthur ‘AJ’ Lewis told a gathering recently at Las Vegas’ upscale Stirling Club that he was there “to support the event, to support the project and to formally let Jackie know that we are going to finance the project”, an announcement that drew cheers and applause – “I’m really appreciative to be here tonight, I’m honored. And Jackie, you have the money, buddy.”

Lewis said that the funding package for Robinson’s All Net Resort & Arena totals just over $4.7 billion.