Futuristic hockey arena to come up at Sacred Heart varsity 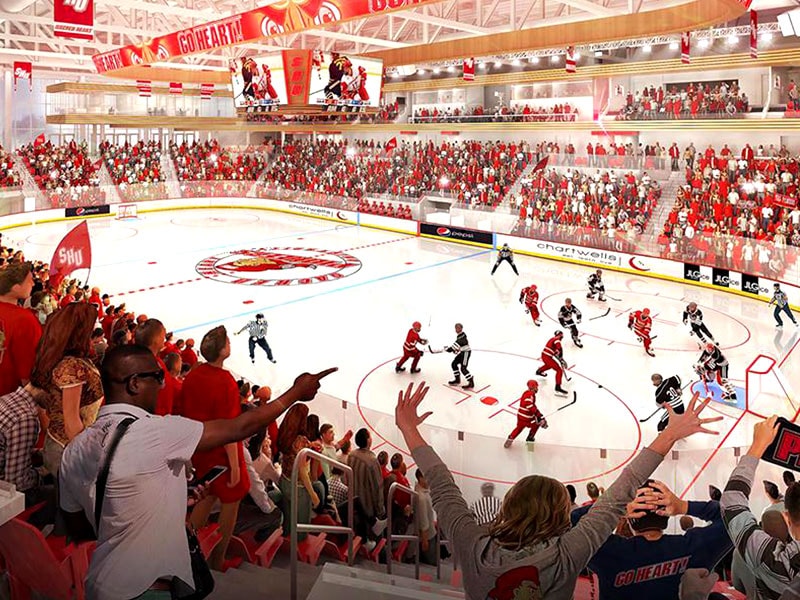 Sacred Heart University – the private Roman Catholic University at Fairfield, Connecticut in US – will construct a hockey and skating arena on its West Campus in Fairfield. The price tag will be $60 million and it will be able to support nearly 4,000 spectators.

SHU President John J Petillo announced recently, “The facility will be home to our Division I men’s and women’s hockey programs, our nationally ranked figure skating team and our men’s club ice hockey team. It is the continuation of a robust, multi-year building and expansion program reflecting our significant growth, appeal and national status.”

Construction of the structure will begin this summer and is scheduled to be completed in 2022. The state-of-the-art arena will be equipped with various facilities for students and guests, including a pro shop, beer gardens, food venues, suites, meeting rooms and offices.

Jim Barquinero, Senior Vice-President, Enrollment, Student Affairs & Athletics, informed, “This arena will be the Division I intercollegiate skating crown jewel and a standout facility in the Northeast. In addition to providing a sophisticated and beautiful home venue for our teams, it will serve our entire university community and residents throughout the region.”

Barquinero said that former and current hockey players deserved a shout-out for the decision to build the arena. Their total devotion towards their work has led to this moment – “It truly is the culmination of many years of athletic excellence by all our former hockey players—men and women—who have donned the Pioneer jersey.”

He informed that future plans envisage the addition of a women’s club ice hockey team, synchronized skating, and much more.

“The arena will be engineered to the highest standards, with enormous attention to detail and quality involving the design of locker and training rooms, spectator space and the rink itself,” informed Michael Kinney, Senior Vice-President for Finance.

He added, “It will include broadcast facilities and a wide range of complementary amenities.”

Special events like guest lectures, concerts, convocations and other activities open to students and the community will be held in the facility. In addition, there will be free ice skating time available to students, faculty, staff and community members when the central skating rink is not in use for sporting events.

“This arena will be a game-changer for Sacred Heart University, our student-athletes and coaches, visiting teams and the youth and families already supporting our athletic teams,” maintained Bobby Valentine, Executive Director of SHU Athletics.

“Not only does it provide a fitting venue for what will soon be a national hockey powerhouse, but it creates a halo effect that elevates all of our Division I athletic programs. It’s another example of Sacred Heart’s commitment to providing our student-athletes, students and fans with a remarkable experience whenever they step on our campus,” Valentine added.

Petillo stated that the new arena can also be used as a classroom for SHU students studying in the areas of sports communication media, sport management, hospitality and other related subjects – “They will use it as a practice space for learning sound and video equipment, doing broadcasts, filming and more.”

The arena is being designed by architectural firms ALG of North Dakota which is one of America’s finest development and investment companies, as well as S/L/A/M Collaborative of Glastonbury whose USP is integrated construction services. The structure will come up on SHU’s West Campus, home of the University’s Jack Welch College of Business & Technology, Isabelle Farrington College of Education which boasts a wide range of innovation and technology resources, a 27-room guest facility and a variety of other varsity departments and programs. It is located a minute off Exit 46 of the Merritt Parkway and will enable students and the community to get easy entry to the facility.

As a typical steel-framed sports facility, the structure is designed to support extremely long spans, vaulted ceilings, and minimal columns within the activated areas.

As the second largest independent Catholic university in New England, and one of the fastest growing in the United States, Sacred Heart offers more than 80 undergraduate, graduate, doctoral, and certificate programs on its Fairfield campus.

It is being said that the new $60 million venue will act as a catalyst to reinforce the institution’s national status and overall appeal. It is also being built as the continuation of a multi-year building and expansion program.

Barquinero revealed that future plans call for the addition of a women’s club ice hockey team, synchronized skating and much more.

Futuristic hockey arena to come up at Sacred Heart varsity